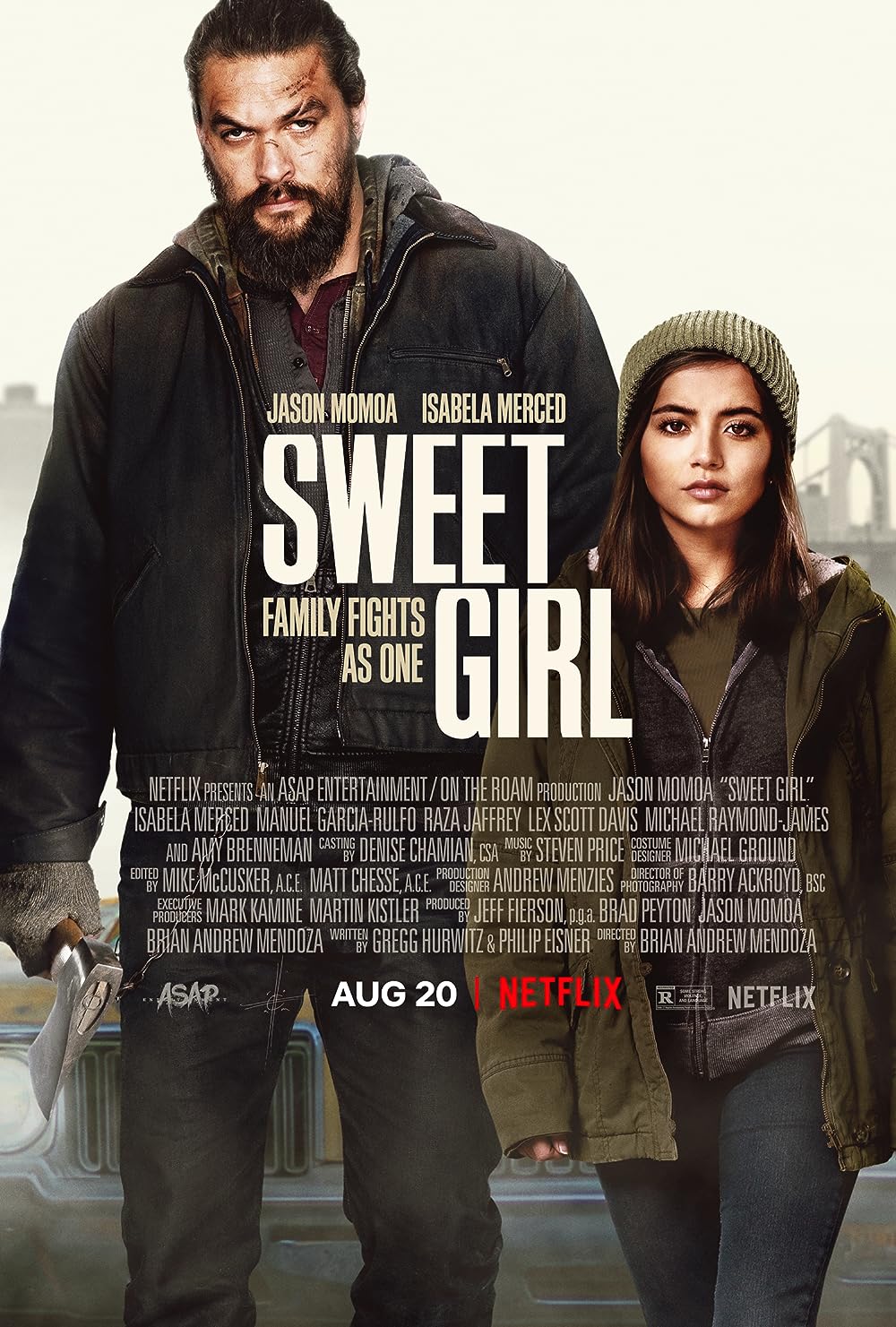 Isabela Merced has grown up. In “Sweet Girl,” director Brian Andrew Mendoza’s new movie, the star of the live-action “Dora and the Lost City of Gold” is less Dora the Explorer and more Dora the Avenger. She can kick some serious butt! Unfortunately, fantastic stunts are about the only good thing this Netflix offering has to offer.

Jason Momoa plays Ray, a devoted husband who’s understandably angry when a promising experimental drug is pulled from the market, sentencing his wife (in the hospital, suffering from cancer) to death. When Ray hears wind of a bribery scandal involving the pharma company that halted the treatment, he sees an opportunity to take out his grief on the men and women responsible. But when he goes to meet a journalist about the news, his daughter (Merced) trails him. After that, their fates are tied. Merced had already showed her action chops before she was Dora, in “Sicario: Day of the Soldado.” And in “Instant Family,” she showed us she was capable of family drama. “Dora and the Lost City of Gold” was just proof she could be the star. After “Sweet Girl,” Merced is about four years from being cast as Lara Croft or Jean Grey or some other badass female action hero, and I am totally on board. She learned multiple fighting styles, including wrestling and jiu jitsu, in order to prepare for her fight scenes. This movie was her time to shine. If you’ve been underestimating Isabela Merced, now’s the time to stop. Despite the odds, Jason Momoa finds a way to look like an everyman when he wants to. As striking as his features are, he can still play grieving husband (and not just underwater superhero). I respect him for that. Unfortunately, “Sweet Girl” calls on him to read off sanctimonious voiceover narration and generally be the kind of #GirlDad you only see in movies. It pulls you out of the movie. It’s not Momoa’s fault. The team of writers includes one guy whose only other credit is “Without Remorse” (the Michael B. Jordan-starring Tom Clancy adaptation) and another who helped write “The Book of Henry” (AKA the movie so bad it got director Colin Trevorrow pulled from a “Star Wars” movie). “Sweet Child” uses a lazy healthcare premise to tug heartstrings from the start. Nothing is more tragic than cancer. But with any discernment you can see the writers are just trying to trick you into a false sense of sorrow, to get you feeling bad for the main characters. Sometimes that works, but the more you see it the less effective it is. It’s been a couple decades since “John Q,” and we’ve seen our share of movies using cancer as a cheap jumping point for an emotional payoff. And then there’s the big twist, toward the end, that completely defies logic. If it was meant to stun viewers into forgetting the bad writing leading up to it, it didn’t work. Instead, it was an eyeroll moment that summed up everything that had gone wrong leading up to it. The best action movies keep the basis simple, and string together their fight sequences with just the bare minimum amount of talking. “Sweet Girl” missed that day in action movie school, I guess.