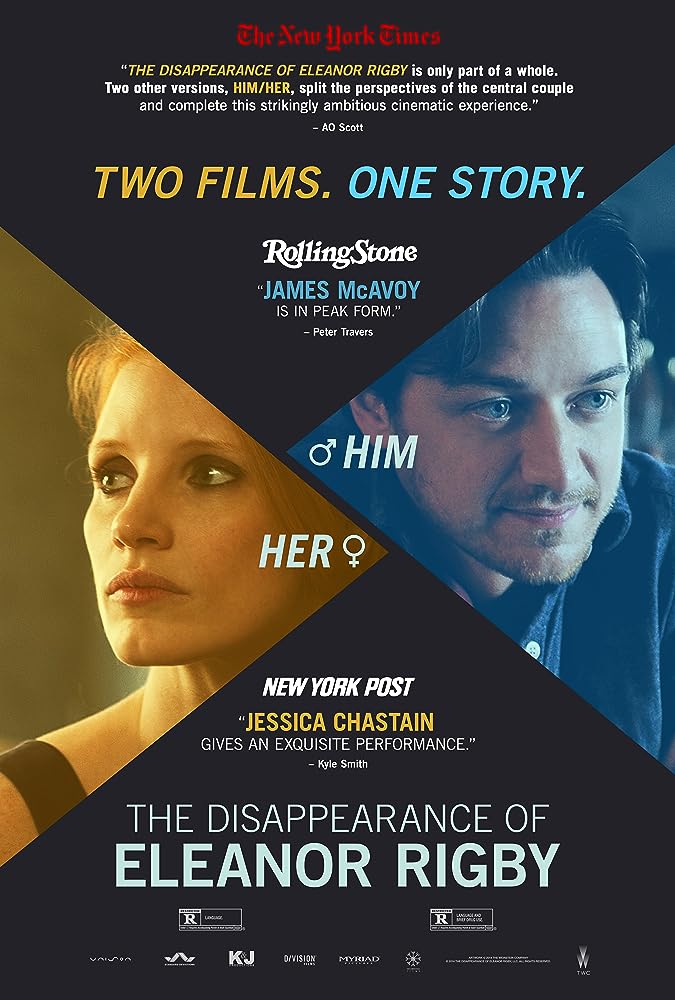 The Disappearence of Eleanor Rigby: Him and Her (2013)

After a tragedy causes their still-new marriage to slowly crumble, Eleanor (Jessica Chastain) tells Connor (James McAvoy) that she needs a break, then quickly moves out without telling Connor where she went. She changes her number and cuts her hair in an effort to reinvent herself. But Connor, who moves in with his dad (Ciaran Hinds) to avoid looking at their apartment and being reminded of their failed relationship, doesn’t want to move on. So when he’s not at the restaurant he runs, he’s trying to get Eleanor back. And Eleanor, living with her parents (Isabelle Huppert and John Hurt) in Connecticut, is struggling with the seemingly endless grieving process, but tries to get back outside by taking classes with a professor (Viola Davis) her father once worked with.

Director Ned Benson released two versions of this story: “Him,” from Connor’s point of view, and “Her,” from Eleanor’s. The combined cut, “Them,” was what released in most theaters, but that leaves out some scenes and doesn’t let the viewer appreciate each perspective on its own. What I found is that if you only have 100 minutes, “Him” gives you much more detail than “Her.” It’s a little easier to follow. But “Her” gives you answers to the few big unanswered questions that “Him” leaves you hanging with, so just watch both.

Since “The Last King of Scotland” over ten years ago, and through movies like “Atonement,” “The Last Station,” and “Split,” James McAvoy has been one of the most consistent, and yet most unappreciated, actors in the industry. The legitimacy he brings to Connor helps us see what sort of place his character is in. At times, when Connor is trying to deflect or be immature about his relationships, McAvoy is unconvincing. But in his meatiest scenes with Chastain, which are too few and far between, he’s at his best. During McAvoy’s scenes with Ciaran Hinds, “The Disappearance of Eleanor Rigby: Him” can dissolve into sappy philosophizing and unneeded father/son bonding moments. That happens even more often in “Her,” though. Eleanor has to deal with a range of people, some not nearly sympathetic enough but some way too dramatic and emotionally moved. Viola Davis has taken tremendous, meaty, substantive roles in movies like “Doubt,” “The Help,” and “Fences,” but she’s also taken terrible roles in “Suicide Squad,” “Blackhat,” and this. Her character, written as a comic relief, doesn’t strike a chord with the audience. It comes off as fake and, therefore, offensive—considering her role as informal grief counselor to Eleanor. She doesn’t display the variety of emotions as realistically as, for instance, Bill Hader, playing a mutual friend. His character offers kind words without preaching to either of those involved. Usually, the script cuts deep. Anyone who has been in a successful or unsuccessful relationship knows what these characters are going through; you’ve had some of these conversations. While the film doesn’t break new ground, it does provide a brilliant cast to play out the sad situation which they’ve been asked to portray. Too sad for enjoyment, sometimes, but well-enough done anyway.

One thought on “‘The Disappearance of Eleanor Rigby’ tells both sides”