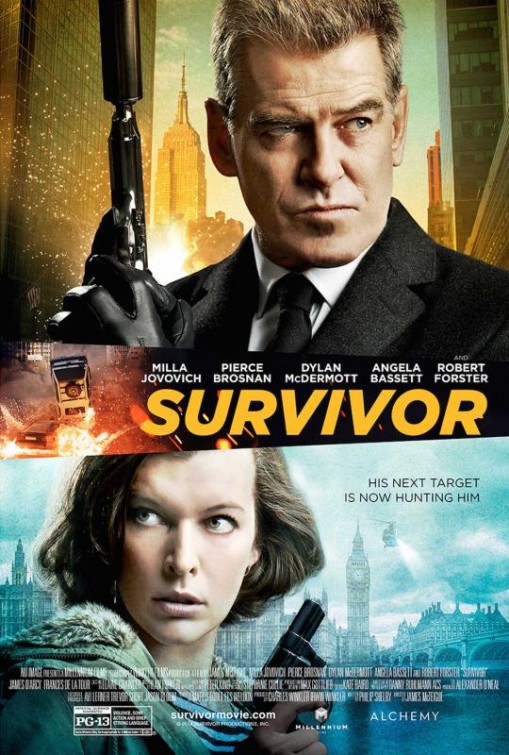 With the threat of terrorism constantly hovering over them, the CIA sends top security analyst Kate Abbott (Milla Jovovich) to oversee the distribution of American visas at the embassy in London. When she discovers that someone at the embassy is intentionally approving visa applications of known terror suspects, Kate brings the information to her boss (Dylan McDermot) and even the ambassador (Angela Bassett). But a series of events also make Kate the suspect in a London bombing and murder. She’ll spend one fateful December night trying to convince her boss of her innocence, while subsequently trying to stop a terror plot and also evade the deadly assassin (Pierce Brosnan) that has been hired to kill her.

Like “Run All Night” earlier in the year, “Survivor” shows that all-nighters are usually no good. Somehow, “Survivor” manages to be even worse than the bottom-of-the-barrel Liam Neeson revenge flick. Pierce Brosnan, better in last year’s “November Man,” can never recapture the days he spent as James Bond. Here, he’s older, quieter, and far less intimidating as the seasoned hitman known as “the watchmaker.” In a smaller role, Robert Forster forced his performance. Thankfully, it’s short-lived. Bassett does likewise. And Milla Jovovich seems lazy…she has no help from an inexcusably absurd script. Like so many other thrillers today, “Survivor” relies on shaky motives. It’s this year’s “Non-Stop” when it comes to originality. The plot is secretive, but not suspenseful. And it’s completely implausible. Leave it to first-time screenwriter Philip Shelby to take bits and pieces of all of the thrillers he’s seen recently and combine them into the ineffective “Survivor.” And like “Blackhat,” which I lambasted for this same reason, “Survivor” sees it fit to invoke 9/11 for dramatic effect. Also like “Blackhat,” it failed to do so effectively. Instead, “Survivor” uses the tragedy as a pitiful crutch.

“Survivor” gives us no hope for the future of action movies. Maybe the days of “V for Vendetta” are over. In a true display of amateur hour, this unoriginal and unexciting thriller somehow manages to fall below even some of the year’s worst.