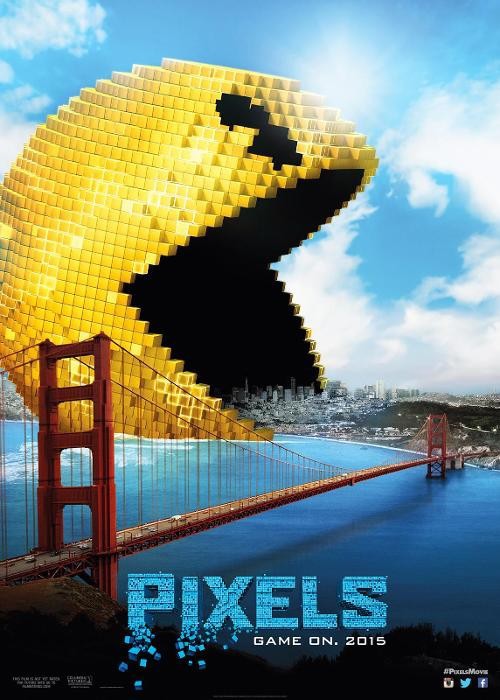 It’s been a few months—April, to be exact—since I’ve seen a new release quite as bad as “Pixels.” So far, it’s an easy choice for the biggest summer blockbummer of 2015. Touting a cast of comedy misfits that haven’t had a hit in a decade (discounting Josh Gad’s voice-only role as Olaf in “Frozen,” of course), “Pixels” is the only one laughing at its own uninspired jokes and ‘80s references that its target audience won’t understand.

When a tape recording of the 1982 video game championship between Sam Brennan (Adam Sandler) and Eddie “Fireblaster” Plant (Peter Dinklage) is sent into space along with a chronicle of the year in news, nobody expected that it would be received so literally. But aliens interpreted the message of video game violence as an act of war and sent pixelated video game protagonists to destroy Earth. After the military proved unsuccessful in their attempt to defeat Centipede, the nerds are called in to do what they do best. Following the lead of Brennan and Plant, a team including Brennan’s childhood friend and sitting President Will Cooper (Kevin James, as unconvincing as any President I’ve ever seen…but still better than Trump), Lt. Col. Violet van Patten (Michelle Monaghan), and video-game-prodigy-turned-conspiracy-theorist Ludlow Lamonsoff (Josh Gad) strap on light blasters in an attempt to save the world. But as they defeat their foes, bigger and tougher (and more iconic) enemies follow.

A movie can’t get off the ground without at least one or two compelling characters. The ones in “Pixels,” however, (yes, all of them) are more one-dimensional than the arcade characters we see on screen. No time is spent giving them any depth. Instead, they’re all conveniently put together in absurd ways (for instance, Sandler is installing Monaghan’s TV when they’re both called to the White House to meet with James). But it’s more than that. If “Pixels” was intended as a comedy, it is the least funny I’ve seen in years. This is par for Sandler’s course, and—since he’s simply an extension of Sandler—Kevin James, too. So that’s not totally surprising. This isn’t the cast we expect to give us the comedy of the year. But “Pixels” was destined to fail. By using a concept only adults over 35 will understand—an attack on Earth by ‘80s arcade game characters…even the obscure ones that never got their own Nintendo Wii game—“Pixels” fails to give its intended audience—it’s rated PG-13—anything to relate to. Sure, Q*bert is cute. But not too many people are playing the newly rebooted Q*bert games on their phones, I’m sure. “Pixels” is too colorful and silly to be for adults, but too obscure for children. I honestly can’t see an audience who will love this movie (besides the childlike couple in their 50s who sat beside me, clapping at every weird ’80s reference). Not only is the focus all over the place—much like this review, I know—but the story is, too. It hops around more than Frogger. “Pixels” is based on a five-year-old short of the same name, which is much better and only wastes two minutes of your time. The full-length dud is written by Sandler movie veteran Tim Herlihy, who wrote all of those terrible ‘90s Sandler movies you know and hate (“The Waterboy,” “Little Nicky”) and Timony Dowling, who has only written one other terrible Sandler movie so far (“Just Go With It”).  “Pixels” might be Adam Sandler’s Adam Sandleriest movie in years—and that’s not a good thing. This weekend, treat “Pixels” like an arcade game with an “out of order” sign on it and avoid at all costs.