When I heard Paul Rudd was the leading man in a Marvel movie, I’ll admit I had my concerns about the tone. I knew “Ant-Man” would try to balance superhero action with comedy—they wouldn’t waste Rudd’s natural knack for humor—but I had my doubts that the jokes would land or that the focus would be in the right place. But, to my surprise, “Ant-Man” takes after Marvel’s last tonal success, “Guardians of the Galaxy,” in its ability to make me laugh and fist pump at the same time. Win-win.

Hank Pym (Michael Douglas), now an old retiree, has hidden his Ant-Man suit—which shrinks its wearer to the size of an ant, but with the speed of a bullet—away in his safe for years. After handing over control of his company to Darren Cross (Corey Stoll), Pym thought the dangerous technology that helped create the suit was better left in his own hands. But Cross found a way to replicate the technology anyway, and decided to sell it to the highest bidder—Hydra, of Captain America infamy. So Pym and his daughter Hope (Evangeline Lilly), who has Cross’s naïve trust, hire burglar Scott Lang (Paul Rudd) to break into the company headquarters and burgle the suit that Cross has created. But of course, Cross has other plans. And when he puts on his own suit and becomes Yellowjacket, the action becomes the biggest little showdown in superhero history.

We haven’t seen much of Paul Rudd in the past couple of years. Now that he’s entered the Marvel universe, he’ll be employed for the next decade—Ant-Man already has a confirmed role in the next Captain America movie, “Civil War.” Like Chris Pratt before him, Rudd transcends his role as comedian and packs a mighty punch in his first super-role. But he’s far from light on the comedy. Along with his crew, played by Michael Pena, T.I., and David Dastmalchian, Rudd delivers deliciously funny lines at just the right moments. “Ant-Man” never lets you forget you’re watching comedians at work. With screenwriting credits from Rudd (“Role Models”), Adam McKay (“Anchorman,” “Step Brothers”) and Edgar Wright (“Shaun of the Dead,” “The Adventures of Tintin”) “Ant-Man” is perhaps Marvel’s funniest release yet. But the emotional element attempted by Michael Douglas and Evangeline Lilly wasn’t there. Solemnity was ruined by flashbacks to “Honey, I Shrunk the Kids.” But their pedigree shines through anyway. They have a résumé for drama. And villain Corey Stoll is ideal. Although his character is flat and one-sided (most of the characters in “Ant-Man”…and let’s face it, most Marvel movies…are), his ability to be likably evil is unmatched. 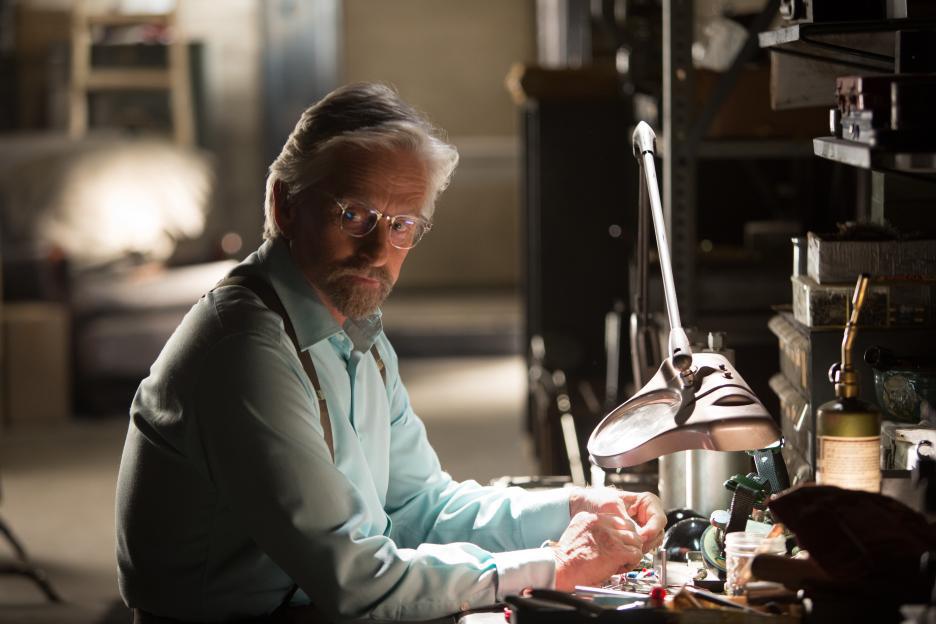 “Ant-Man” does not lack in action, but this new ant-sized action is as miniscule as you might guess. It never ceases to be unique, as we see ant-sized Paul Rudd run up the barrel of a gun before turning full size to punch a security guard, but it’s also not an easy type of fighting to play up. Sometimes we even see it played down. When a fight occurs on the tracks of a toy train, we see the small plastic engine fall off the track with no damage or even much noise to a full-size adult. It’s shown for comedic effect, but it instead just emphasizes the smallness of the action. I’m a traditionalist, I guess. I’d rather see the Hulk help destroy New York City than see Ant-Man knock over a little girl’s train set. But don’t let that fool you into thinking this is a little movie. It packs a big punch in the big picture. Plus, we get to see a minor Avenger practice for his bigger role in the upcoming sequel. It’s a nice reminder of the macrocosm universe that Marvel works in. “Ant-Man” isn’t just a filler between Avengers movies. It’s a contender in its own right.