Director Steven Spielberg hasn’t impressed me this much since Catch Me if You Can—which might as well have been the title of his colorfully animated The Adventures of Tintin. Faithful to its small screen and comic strip roots, The Adventures of Tintin follows a young journalist, Tintin (Jamie Bell is a nice, but mature fit), his small dog Snowy, and his new pal Captain Haddock, voiced wonderfully by Andy Serkis (Rise of the Planet of the Apes), as they discover the secrets behind a famous war ship and its lost treasure.

I haven’t witnessed such excited, thrilling chase scenes in a film since Spielberg’s Indiana Jones trilogy. And in 3D, the action is even more spectacular! The animation is incredibly realistic, capturing even the minutest, most particular of details in the characters and their surroundings. The Adventures of Tintin tells a more electrifying pirate story in 10 minutes of flashbacks than Pirates of the Caribbean has told in 8 years of movies. And it likely has the most intense action of any PG-rated film in years as it makes perfect use of each of its 107 minutes. 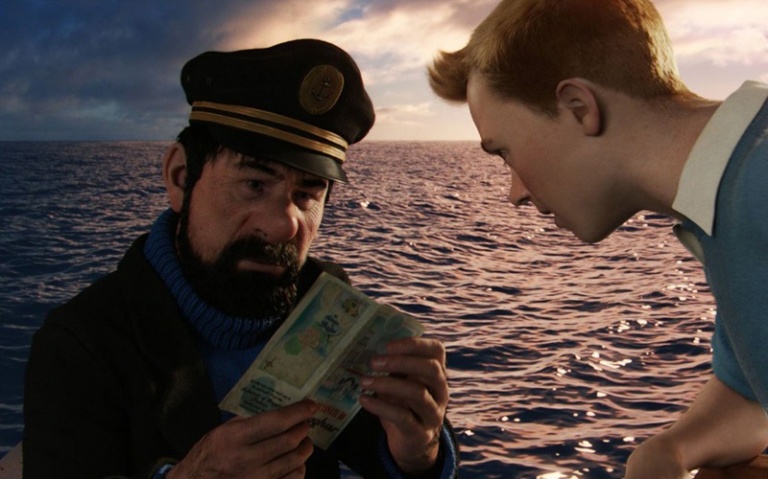 The story is masterfully clever, and taps into the unique style of the comic strip. Simon Pegg and Nick Frost, the hilarious British duo of Shawn of the Dead and Paul, voice the utterly hilarious Thomson and Thompson, bumbling idiots who also happen to be cops. Daniel Craig voices the dreadful, but unbelievably realistic Rackham, the pirate bent on figuring out the location of the secret treasure before Tintin and friends can reach it. While there is a notable and disappointing lack of female characters (just minor characters here and there) The Adventures of Tintin’s cast is a brilliant bunch of British vocal talents.

It seems that the most unforgettable films seem to be the toughest to write about. I can’t praise this movie enough. And the best news of all…The Adventures of Tintin begins a new trilogy by Spielberg and producer Peter Jackson! I can’t wait! If the Academy likes any animated movie enough to follow Up and Toy Story 3 into the list of Best Picture nominees, it has to be The Adventures of Tintin.

15 thoughts on “The thrilling, swashbuckling ‘Adventures of Tintin’”