About once a year (if we’re lucky), a movie musical comes along that makes us forget that the best days of live-action musicals are behind us. Now, most of our musicals come in the form of jumpy candle-sticks and dancing snowmen. Steven Sondheim’s 1986 musical “Into the Woods” cowered in the shadow of another popular musical that hit the stage that same year…“The Phantom of the Opera.” Still, the fairy tale mash-up managed to snag a few coveted Tony Awards and won the hearts of many devoted fans. “Into the Woods” was always primed for a Hollywood movie. And now, it’s finally here.

Jack, of beanstalk fame (Daniel Huttlestone, who broke the hearts of millions when he was shot in 2012’s “Les Miserables,” perhaps Hollywood’s last good movie musical), Red Riding Hood (Lilla Crawford, in a huge breakout performance), Cinderella (Anna Kendrick, always pitch-perfect), and a meek and barren Baker and his wife (British star James Corden and Emily Blunt, rounding out a great year) slowly make their way into the dreaded woods after an evil witch (Meryl Streep, of course) promises to reverse the spell which has left the husband and wife pair childless. But soon these troubled souls will all learn to be careful what they wish for, as a hunky prince will pine for Cinderella’s heart (Chris Pine, actually) and one large beanstalk will prove to be too much for the small fantastical village. Oh, and watch out for The Wolf (Johnny Depp is a zoot suit riot in a smaller role).

“Into the Woods” presents a watered-down, PG version of the dark and twisted tale Sondheim put on the stage, but it doesn’t lose much in doing so. In fact, the script (by James Lapine, who wrote the play with Sondheim) is a masterful mix of merry and malice. Cheerful, and then in a heartbeat terrifying. It gets away with an awful lot of grim (well, Grimm) for its rating. In fact, between its catchy tunes, the story is a fast-paced, feverish tall tale. And, like the musical, “Into the Woods” is very self-aware. It’s a dark satire of every fairy tale you grew up hearing.

An ensemble as great as this is nearly necessary for the number of important roles that “Into the Woods” relies on. Several stories play brilliantly off of each other as the characters’ paths begin to intersect. The Baker’s Wife, the role that won “Into the Woods” its only acting Tony, is performed with grace by Emily Blunt, who went from badass soldier in “Edge of Tomorrow” earlier this year to charming and funny baker’s wife here. She can do no wrong, it seems, and her recent Golden Globe nomination for the role suggests that as well. Welcome to America, James Corden! Last year, the British actor starred in “Begin Again,” his first major American movie role. Now, I’m confident in saying he can feel free to visit as often as he pleases. I’m waiting for the day he hosts “Saturday Night Live.” He’d be perfect. But I’ll get back on track. I, like most, had never heard the name Lilla Crawford before seeing it appear here in the credits. Best known for her role as Annie in the Broadway revival in 2012, Crawford has a confident sass and commanding voice that makes her performance as Red Riding Hood absolutely unforgettable. Of all of the performances to come from this great cast, hers is the one that really made an impression on me. Covered in ugly prosthetics, Meryl Streep shows humor and heart (and belts out one emotional musical number) as her witch appears throughout the woods to check in on the progress of the mission. She’s in classic form, earning her own Golden Globe nomination. But beyond a doubt, the one character who encapsulates the essence of “Into the Woods” is Chris Pine’s Prince Charming. The mega-hunk without much of a brain is almost a cartoon in the exaggerated way he presents himself, saying things like “I was raised to be charming, not sincere.” His rendition of “Agony” (alongside his prince brother, played by Billy Magnussen) would turn around even the worst day. You simply can’t help but smile at one of the most fun scenes of any movie this year (truly!). 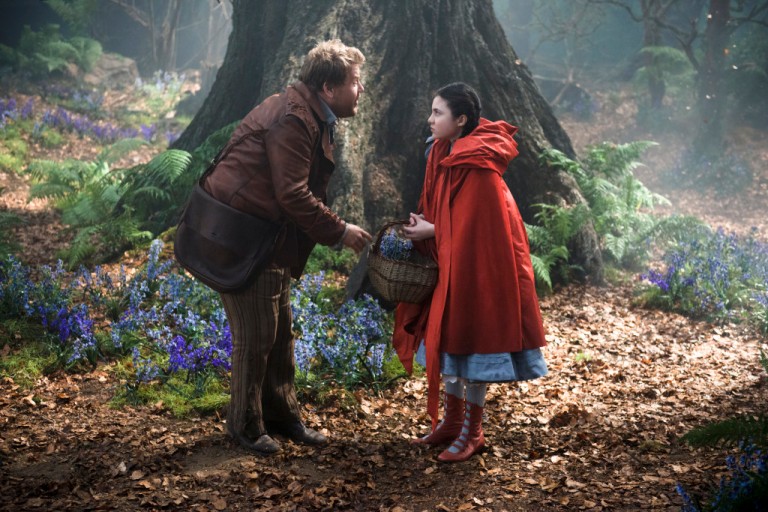