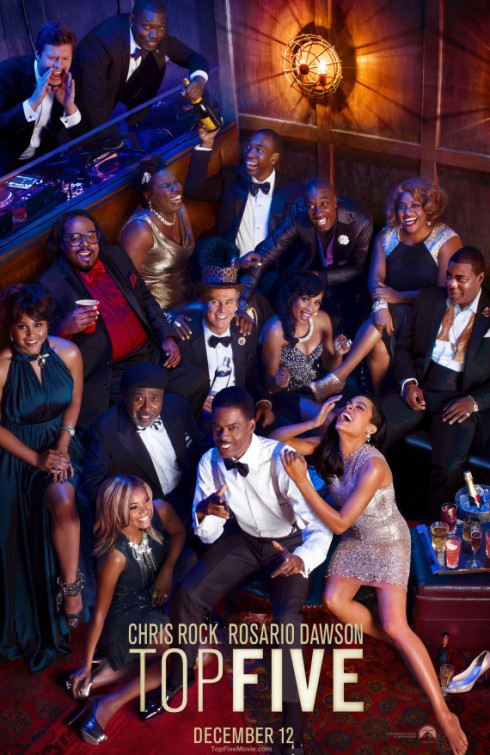 In a year where it seems everyone is playing ultra, exaggerated versions of themselves comes “Top Five,” writer/director/star Chris Rock’s latest about a formerly world-famous comedic actor who hopes to transition into more serious works. If Michael Keaton’s meta “Birdman” was a comedy, it would look something like “Top Five.” Chris Rock’s resume might lead you to believe “Top Five” is another “Grown Ups” or “Head of State,” but you might be surprised. While he’s no Sidney Poitier, Rock can be taken seriously if he tries hard enough. With his help, “Top Five” is an unexpected mini-success.

It’s the weekend of Andre Allen’s (Rock) TV wedding to reality star Erica Long (Gabrielle Union), but Allen is busy promoting his new film about the Haitian slave revolution of the early 1800s (with help from his agent, played by Kevin Hart, and bodyguard, played by J.B. Smoove) and interviewing with New York Times feature writer Chelsea Brown (Rosario Dawson). As he attends his bachelor party (with a few special cameos), visits family (including Tracy Morgan and Jay Pharaoh), and runs a few errands, Brown will force Allen to be honest with himself about his relationship, his past transgressions (including alcoholism and jail), and his future in entertainment. While it’s not always hysterical, “Top Five” (one of the worst titles of any movie this year) finds a way to string together a socially relevant story with a few good jokes and a refreshing ending.

For a movie that seems to want to be rooted in realism, it sure does come with a heavy dose of outrageous. It’s often absurd, but rarely to its benefit. Some scenes left the crowd laughing so loud the dialogue was lost under echoes of enjoyment. Still, most of the time I was left with the familiar Chris Rock face of confusion. I’m sure you’ve seen it before. “Top Five” shows, yet again, that Chris Rock really was better at stand-up. Sorry for the rigorous honesty. His jokes here sound like leftover lines from a routine he wants to do. They’re told with the same stand-up cadence, unnatural for one-on-one dialogue. You’ll laugh, no doubt, but couldn’t it do better?

Rosario Dawson is a gem, never the star of the show but almost always the one you remember. In this, she works with the material she’s given to be a solid foil to Rock’s character. Every good comedy needs a true love interest, and it’s no surprise that the two people who spend the most time together would make that connection. But as well as the romantic subplot is told, the chemistry never feels real. As much as you root for that spark to appear, you never see it. Just two actors not good enough to convince us that they’re not acting.

By being careful to continuously repeat themes throughout the movie without leaving too many loose ends, “Top Five” threads the needle between blockbuster comedy and avant-garde entertainment. It might be easier to respect than enjoy, but that won’t stop you from getting a few big laughs in.