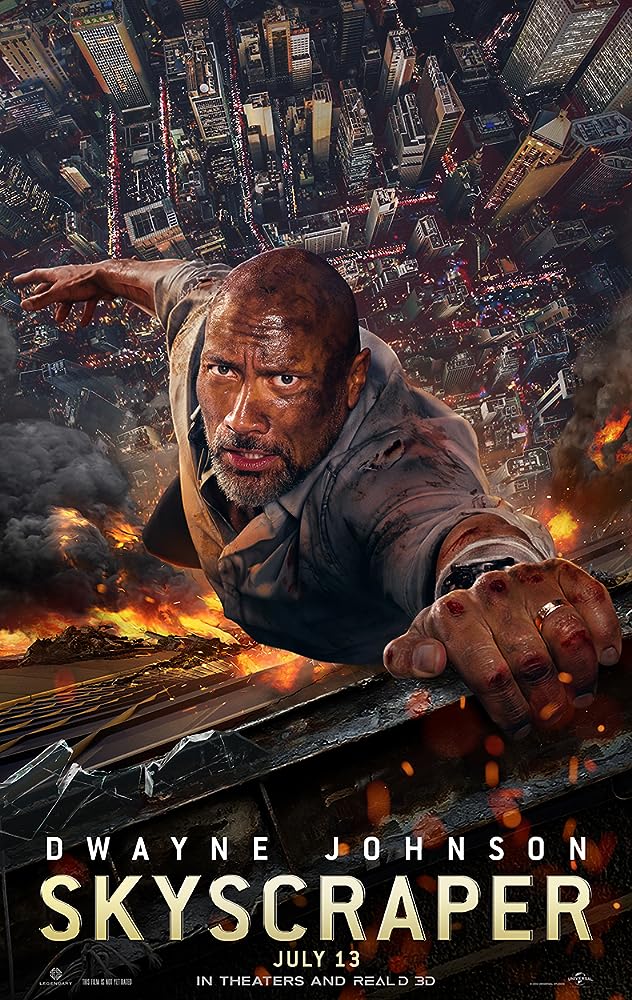 You know what a good-bad movie is, right? One that’s so bad, it cycles back around and becomes good again? Those guilty pleasure movies that you don’t usually admit to watching once a year even though you definitely do? “San Andreas” is that for me. The cheesy lines, the over-the-top action, the obliteration of every known law of physics…and the best-worst closing lines I’ve ever heard: “So, what now?” “Now, we rebuild.” Classic good-bad movie moment. Well, “Skyscraper” is not a good-bad movie. It’s a bad movie.

Dwayne Johnson plays a former hostage negotiator who lost his right leg in an on-the-job mishap. Now, he’s a security analyst, tasked with making sure the world’s tallest building is ready to open to tenants. But when he takes his wife (Neve Campbell) and kids to Hong Kong to stay in the building and talk to the designer, an unexpected terror plot will trap his family in a burning building with nobody willing to save them. Except him.

All of the elements of a good-bad movie are present in “Skyscraper”: lots of machine guns, a large fire, an impenetrable panic room, and even its own take on the “San Andreas” closing lines: “What do we do now?” “Rebuild.” Those words were in this movie. I’m serious! “Skyscraper” is missing its own personality. It goes through all of the patently absurd motions, but it lacks the heart. Even Johnson seems out-of-place. Sporting a suit jacket and a salt-and-pepper beard, “Skyscraper” tries to make a mature family man out of our muscly hero. I’m not buying it. Loyal dad, sure, but down-on-his-luck middle-aged man? No way.

Dwayne Johnson is one tornado movie away from his own disaster trilogy—but even though “San Andreas” has a special place in my heart (and my Blu-ray collection), I don’t think “Skyscraper” ever will.