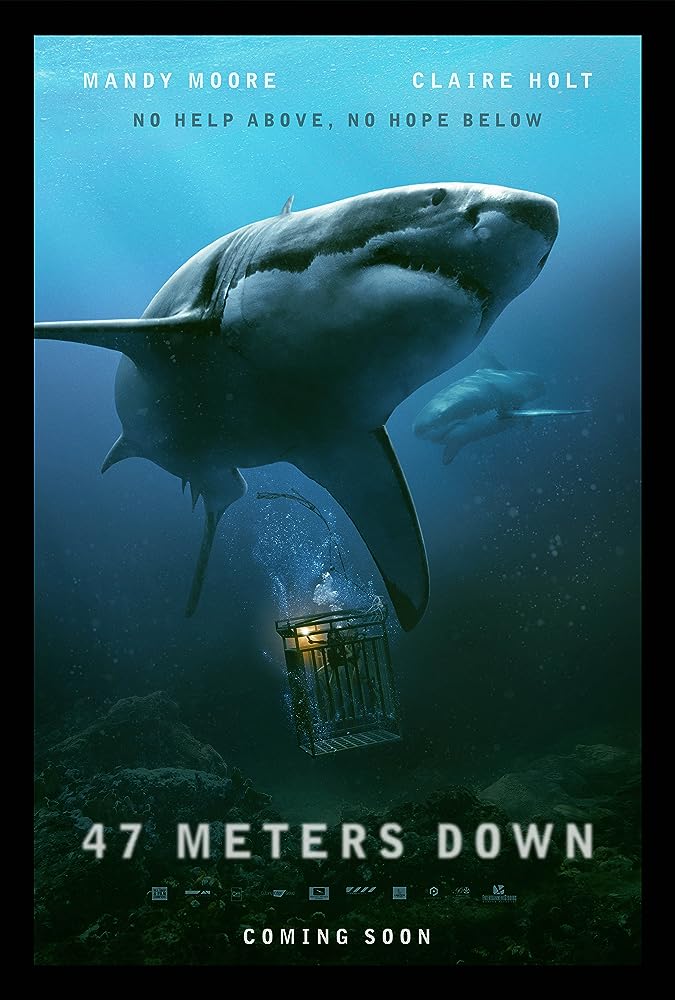 A theater full of uproarious laughter, during a scene that was definitely not intended to get a laugh, is the perfect representation of the unforgivably awful “47 Meters Down.” It makes “Jaws 3-D” look like “Jaws.” Its characters are so unbearable, it’ll have you begging for Steven Seagull, Blake Lively’s avian sidekick from 2016’s “The Shallows.” You’d gladly take Mandy Moore or Claire Holt’s place in that rusty shark tank 50 yards below the surface if it meant sparing you from watching another groaningly awful scene…okay, maybe that’s a bit too far. Mandy Moore, who found a role that works for her in NBC’s “This Is Us,” sparking talks of a career renaissance, here descends back to a level closer to “A Walk to Remember”—melodrama, angst, and general crappy acting abound. Her constant play-by-play (“The cage is sinking!” “I’m running out of air!!” “Sharks!!!”), when they’re all things we can clearly see, are an attempt to add dialogue when there’s no easy way to do it. Maybe silence would have been their best bet.

“47 Meters Down” resorts to horror movie chum—foreshadowing lines, jump scares—because it has nothing else to offer. Its few attempts at humor were met with groans, and its most absurd moments of seriousness were met with chuckles—and in some cases, like I mentioned, full-throated laughter. Not with the movie; at it. I know I’m not providing the most poignant take on “47 Meters Down.” Frankly, I don’t want to waste my time. It’s not even worth that. The only thing that saved it from being the worst film of the year is a half-hearted attempt at a trick ending that they ending up botching anyway. While it was met with mixed reviews, and friends told me they had good summer fun with it, I found “47 Meters Down” to be a complete waste of time.