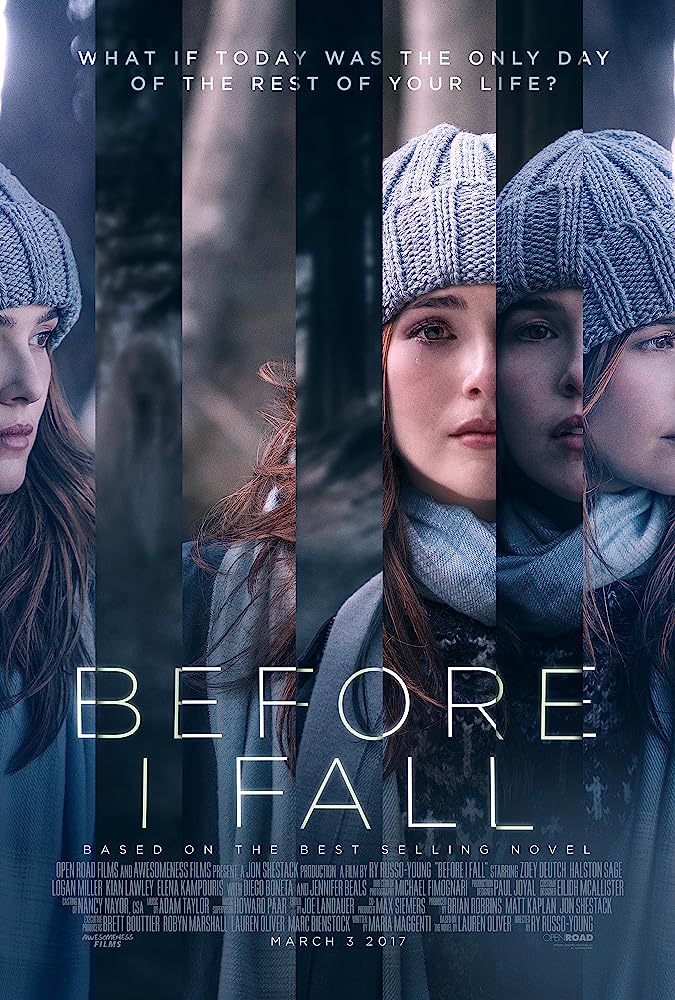 You know that hilly, affluent neighborhood in Grand Theft Auto V? That part of Los Santos with the winding roads and gated driveways? If that was real life, the sheltered pretty girls in “Before I Fall” would live there. It’s just like the community in the Pacific Northwest where Sam (Zoey Deutch), Lindsay (Halston Sage), Ally (Cynthy Wu), and Elody (Medalion Rahimi) wake up on Valentine’s Day, just a normal Friday in the lives of these close-knit high school “baes” (if you don’t like the millennial lingo, this might not be the movie for you). But after a busy school day and a fun, care-free party at a friend’s house, Sam gets into a nasty car crash on her way home. But she inexplicably wakes up to relive Cupid Day. Over and over again. Until she can figure out what she needs to do to change the course of her life and the lives of those around her.

Even back when Lauren Oliver’s YA novel of the same name released in 2010, this “Groundhog Day”/butterfly effect concept was hardly original. The young adult novel adaptation is where great film goes to die. For every “The Perks of Being a Wallflower,” there’s “The 5th Wave,” “I Am Number Four,” and four “Divergent” movies. And “Before I Fall.” If the trailer doesn’t give the ending away, the obvious foreshadowing and easily deciphered clues will lead you to the answer within the first thirty minutes. The weak, tepid script and bare-bones plot are barely engaging enough to drag audiences along until the movie’s predictable conclusion.

Deutch, Sage, Wu, and Rahimi are perfect in the same way that cookie cutters are the best for shaping holiday sugar cookies. Their characters are just different enough to stay friends but still allow different types of people to relate to them. It’s just what you’d expect. In their defense, it’s not that they were bad. There was the foil, the comic reliefs, and the valiant main character who drives home the good-intentioned message that “Before I Fall” hopes to instill. Everyone plays their part. No, it’s not their fault “Before I Fall” manages to be a waste of time. And in an age where movies with female directors and screenwriters are still so regrettably rare, I respect director Ry Russo-Young and writer Maria Maggenti for adapting Oliver’s novel into a movie that will surely appeal to an audience of young girls that can more easily relate to the group of girls at the story’s core. But if that doesn’t describe you, you don’t stand to get much from their efforts.