Directed by Joel and Ethan Coen

In “Hail, Caesar!” writer-directors Joel and Ethan Coen give us just enough of their cast of stars to tease us into wanting more. A ten-minute scene with Ralph Fiennes is the funniest I’ve seen all year. A musical number with Channing Tatum has the audience pleading for more screentime from the smooth-dancing “Magic Mike” star. Coen Brothers favorite Frances McDormand (“Fargo”) is in a hilarious three-minute bit. Even the excessive screentime given to Josh Brolin, in the lead role, has us hoping for a few more minutes. But these great performances don’t turn “Hail, Caesar!” into an articulate story. It’s a jumbled mess—entertaining, but incoherent. 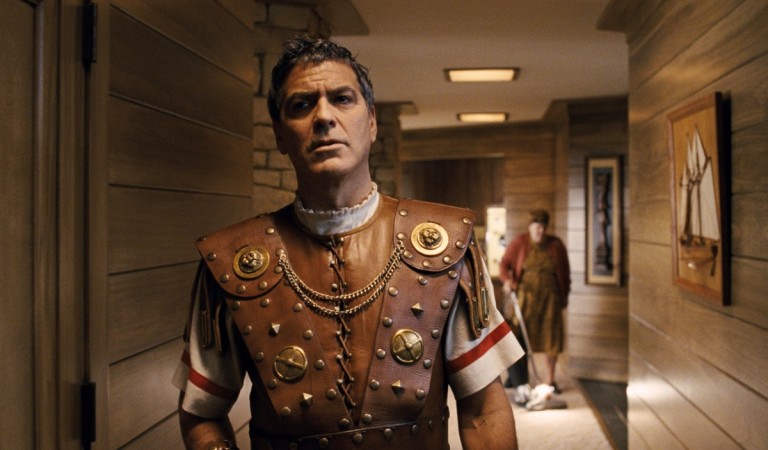 Hollywood fixer Eddie Mannix (Brolin) is called upon to keep unpredictable Hollywood stars like Baird Whitlock (George Clooney) in check. So when Whitlock is kidnapped for ransom by a strange group of old white men known as “The Future,” Mannix spends the day trying to get him back, which dealing with other problems—like a starlet (Scarlett Johansson) pregnant without a husband or a young actor of popular Westerns (Alden Ehrenreich) tapped to lead an artsy theatrical drama.

As young actor Hobie Doyle, young actor Alden Ehrenreich is a breakout sensation. His hilarious deadpan delivery filled the theater with laughter. Josh Brolin has read a Coen script before (in 2010’s “True Grit”), but here he’s a natural. Jonah Hill is wasted in a small role, but his “21 Jump Street” partner Channing Tatum is utilized perfectly. As twin sister gossip columnists, Tilda Swinton is doubly good fun. But Ralph Fiennes, as esteemed director Laurence Laurentz, is the film’s brightest bright spot. And the Coens’ sharp, witty script fills “Hail, Caesar!” with jokes that stick most of the time. Its quickness and humor felt like a welcome blend of Sorkin and Tarantino. But the story is undeveloped and raw. It felt forced or strung together. Despite a great cast of characters, Joel and Ethan Coen couldn’t give them a story worth playing out.