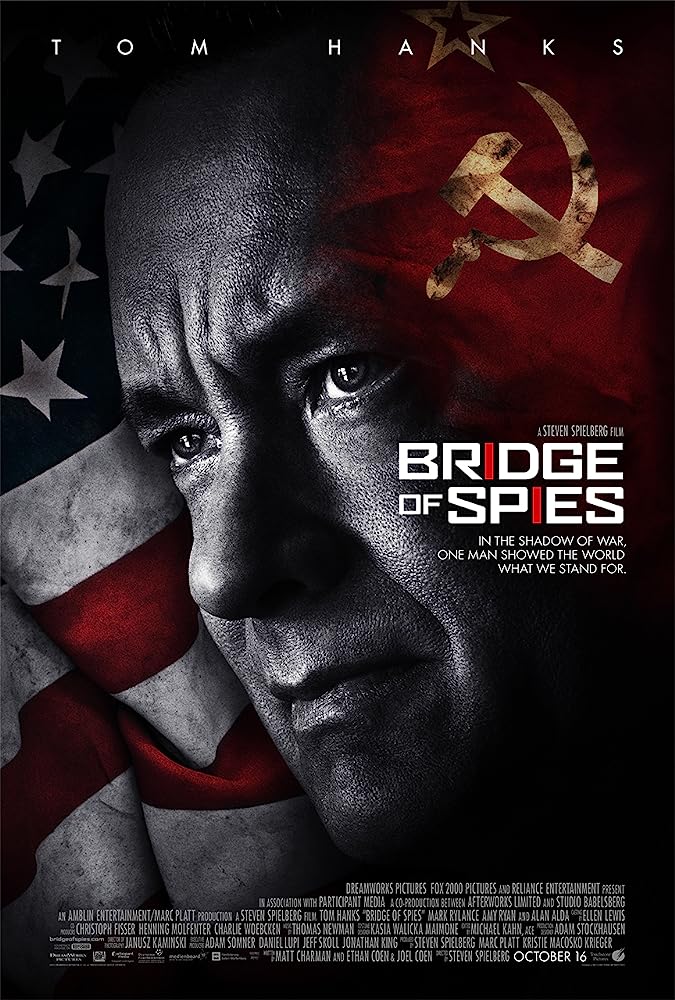 “Catch Me If You Can,” “The Terminal,” “Saving Private Ryan.” The previous three collaborations between director Steven Spielberg and Hollywood legend Tom Hanks have been pretty successful. Their latest, “Bridge of Spies,” may not be up to that caliber. But few films are. “Bridge of Spies” is yet another reliably solid film from two of the greatest filmmakers of our time…or any. Plus, we haven’t seen either of them release a movie in a couple of years (“Saving Mr. Banks in 2013 for Hanks, “Lincoln” in 2012 for Spielberg). Can’t we just be happy we get to see them working again?

In the heat of the Cold War in 1957, the U.S. government captured an alleged Soviet spy in Brooklyn. The instantly reviled man, Rudolf Abel (Mark Rylance), was represented by a respected insurance lawyer, Jim Donovan (Hanks). His unfair trial took the pair to the Supreme Court, where Donovan was committed to giving Abel a fair and democratic trial. Soon after, an American pilot (Austin Stowell) is captured in the USSR, and an American student is detained on the wrong side of the wall in East Berlin. The CIA tasks Donovan, despite his obvious hesitations, to travel to Berlin to negotiate the exchange of the respective prisoners.

I can’t pretend to be surprised anymore when Tom Hanks gives a monumental performance. He’s one of the surest bets in Hollywood, and he has been for decades. As real-life Cold War hero Jim Donovan, Hanks delivers his share of dramatic monologues. But he keeps the tone light, despite the heavy subject matter. This type of everyman hero is Hanks’s bread and butter. It’s a cake-walk for him. Plus, he’s always been my personal favorite…you’re not likely to hear a bad word from me (let’s just ignore “Larry Crown,” okay?). Rylance has impeccable delivery playing the ever-so-likable accused spy. Some of the smaller supporting players put too much effort into their performance, while others take it too easy. Overall, acting isn’t where “Bridge of Spies” excels, despite Hanks’s powerful turn. Well…okay…to put it in perspective…this isn’t a powerful turn like Forrest Gump or Captain Richard Phillips or Jim Lovell or probably even Josh from “Big,” for what that was worth. Maybe closer to Carl Handratty? He’s good, but keep it in perspective—we are talking about a guy who at this point has a standing invitation to attend the Academy Awards.

Just a few days ago, frequent Spielberg cinematographer and two-time Oscar winner Janusz Kaminski took home the Hollywood Film Award for his work on “Bridge of Spies.” I still think this film (don’t you love clickbait?) deserves all of 2015’s cinematography honors, but “Bridge of Spies” felt distinctly Spielbergian. It was undeniably beautiful. Less beautiful was the unorthodox way “Bridge of Spies” was edited. Michael Kahn, another Spielberg favorite and a 3-time Oscar winner in his own right (“Raiders of the Lost Arc,” “Schindler’s List,” “Saving Private Ryan”) juxtaposed scenes almost like they were shot on double-exposure, sometimes transitioning into the next scene before the current one has time to really end. It’s like crossfading on Spotify, when your next song begins playing before the current song’s outro has properly concluded. It makes for a fast-paced movie with no down time, which is a miracle considering the film’s nearly two and a half hour runtime. But something about it seems unnecessary.

The script, too, got the big-name treatment. The Coen brothers helped newcomer Matt Charman tackle the blistering Cold War epic. That’s where the film’s subtle, nuanced humor came from. But to me, “Bridge of Spies” would have been better without it. Without the humor. Without the unique editing techniques. Without the frill. Maybe Steven Spielberg feared that audiences couldn’t handle a straight-forward Cold War thriller that lasts more than two hours. I assure you, we could have. I would have preferred it.