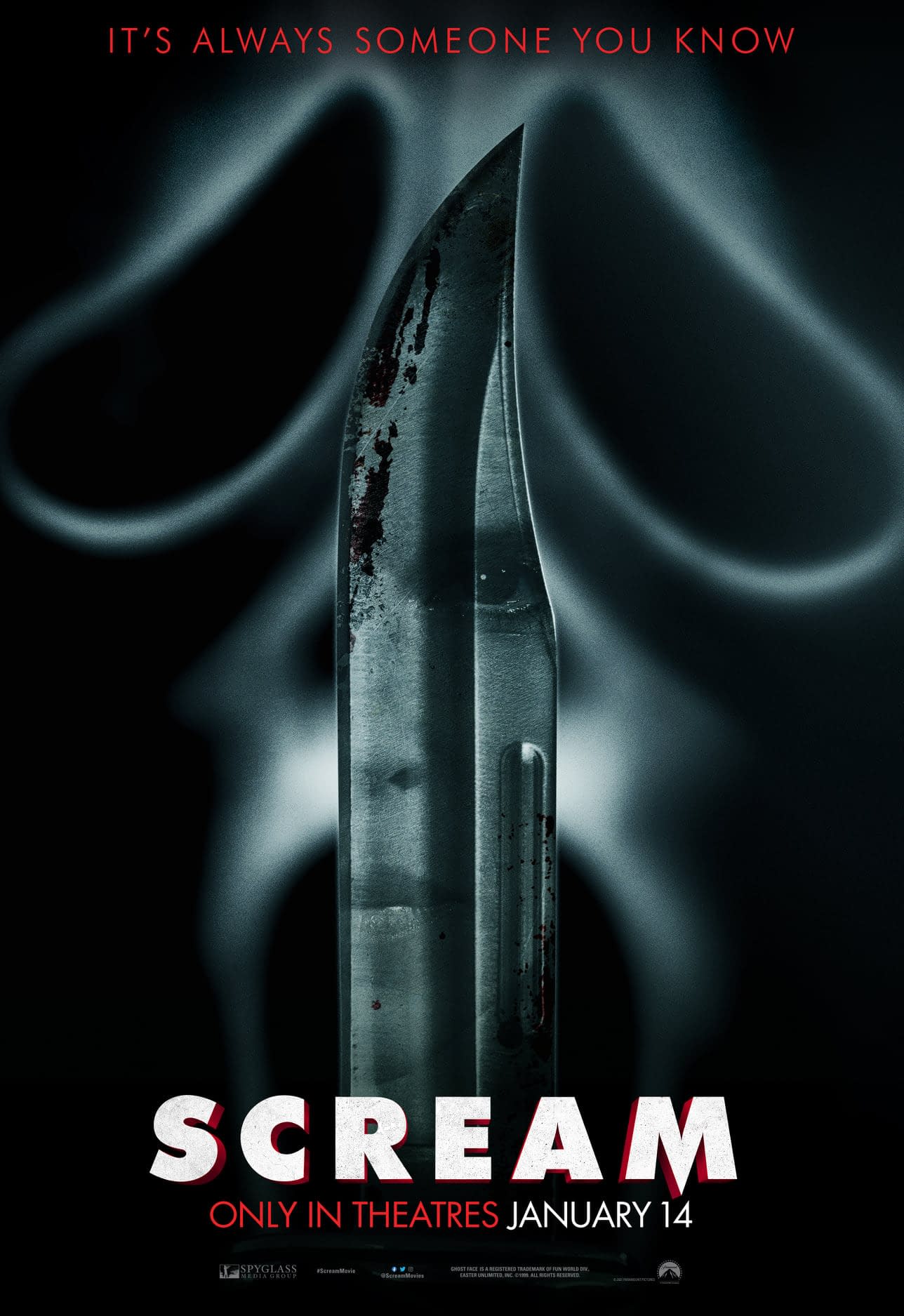 “Scream” reboots its iconic 25-year-old horror franchise with a familiar scene—a young girl, Tara (Jenna Ortega), home alone, is called by an unknown number. The caller talks to her about scary movies—including his favorite, the first “Stab” movie (which, if you remember the “Scream” sequels, was based on the events of the first “Scream” movie). She prefers newer horror movies. He laughs off the girl’s assertion that elevated horror movies like “Hereditary” are better than the old-school slashers of the ‘80s and ‘90s. And then, as if to prove his point, he gives her about a dozen slashes.

A sequel needs to be either stupid or proud to parrot so many of its franchise’s motifs. “Scream” is the latter. The movie is almost brazenly confident in itself. It doesn’t hesitate before openly referencing itself by having its characters talk about the “Stab” movies. If it had quavered, I don’t think “Scream” would have worked half as well as it does. 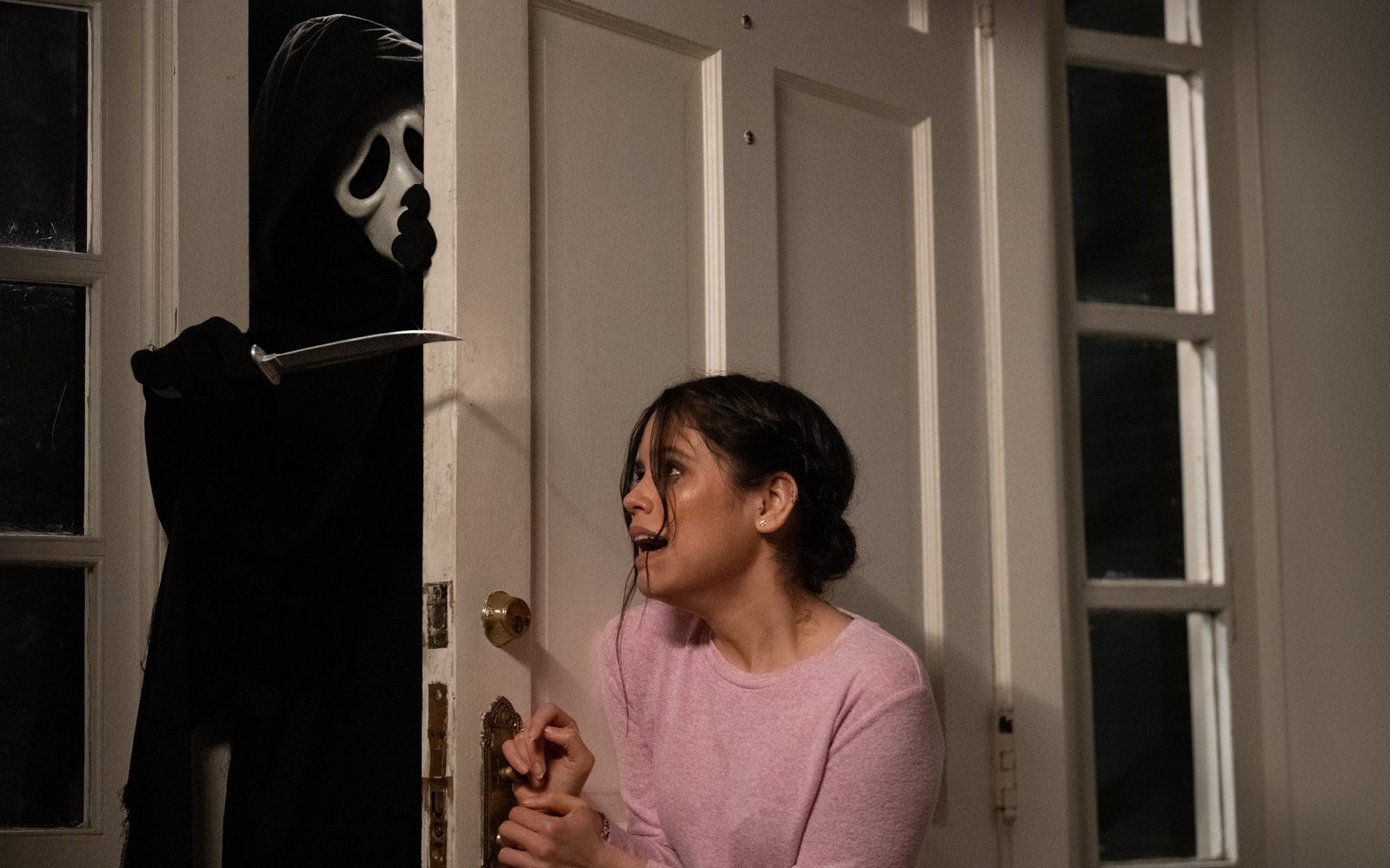 When Ghostface moves on from Tara (Ortega, by the way, is a bona fide scream queen in the making), he tracks down Woodsboro residents who had some connection to the “Stab” movies. Like the previous copycats, they’re probably looking to inspire another movie. The resurgence in crime brings Sydney Prescott (Neve Campbell) and Gail Weathers (Courtney Cox) back to Woodsboro, where Dewey (David Arquette) has been living all along. But the main characters in this sequel are a group of high school friends who almost all have some connection to the original killings in one way or another…making them all potential victims, and also suspects.

“Scream” makes you suspect Ghostface behind every open refrigerator door, whether he or she is there or not. The jump scares that Tara confesses to loathing when she’s talking to the killer on the phone are prevalent, but they’re also done to perfection. “Scream” may not be elevated horror, but the franchise has elevated the slasher movie by leaning into its tropes. It’s confident enough to say “These are the best and worst parts of our genre, but we’re going to use them all anyway.” The franchise has always been that self-aware. When a character goes off alone, they do so despite knowing (and sometimes professing) that it’s a bad idea. They know the rules of horror movies. But is this “Scream” sequel derivative, like Sydney jokes the “Stab” sequels were? I don’t think so, precisely because every copy/pasted piece is introduced with a knowing wink.

Jenna Ortega is effective in her role, like I said, but so are basically all her costars. Melissa Barerra, playing Tara’s sister Sam, makes quite a transition from last year’s “In the Heights” to this. Playing twins, Jasmin Savoy Brown and Mason Gooding are also standouts. I enjoyed Dylan Minnette in “Don’t Breathe” and I was happily surprised when I saw him here. And of course, you can’t go wrong inviting Neve Campbell back. I will say, however, that she and Courtney Cox weren’t used as well as they could have been. After his 2020 documentary, I have a new appreciation for David Arquette. Dewey is finally a well-rounded character instead of just a dorky rookie cop.