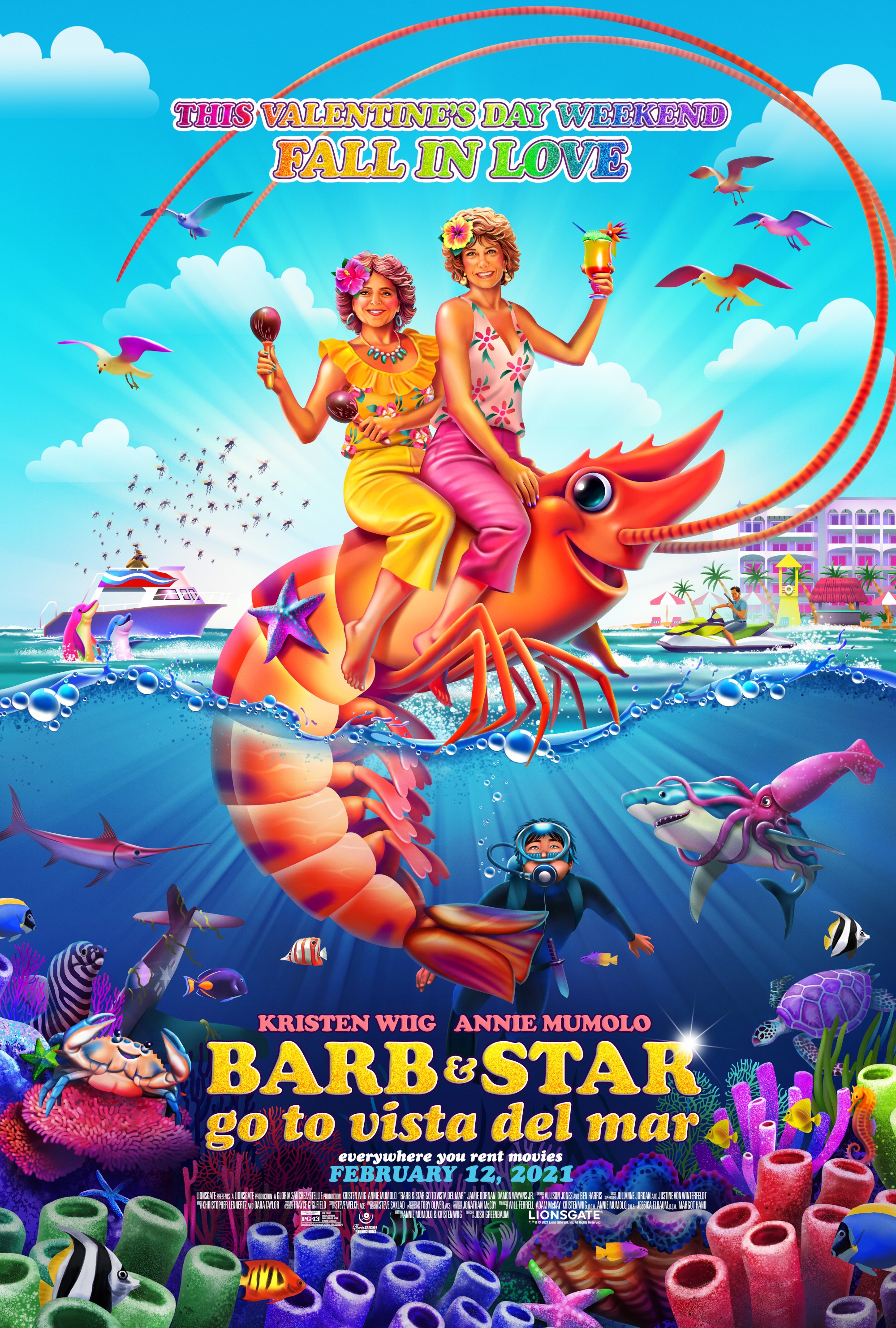 Kristen Wiig, Annie Mumolo, Jamie Dornan, and a second Kristen Wiig star in the wackiest comedy of the year, the Will Ferrell-produced “Barb and Star go to Vista Del Mar.” In it, Barb (Mumolo) and Star (Wiig) have the adventure of a mid-lifetime when they take a spontaneous trip to a Florida resort town after losing their jobs. It’s all fun and games until they meet Edgar (Dornan), an evil henchman sent by his boss (Wiig again, this time in ridiculous makeup) to help execute a plan to kill thousands of people at the resort town Barb and Star are staying in. But will a budding (and forbidden) romance between Edgar and Star change the antagonist’s mind?

“Barb and Star” is built upon a wacky premise that’s right up Kristen Wiig’s uncanny alley. She’s known for comedy that isn’t afraid to embarrass itself, and she and Mumolo helped write a script that is so confident in its absurdity, you almost don’t mind. When Jamie Dornan breaks into a song-and-dance number on the beach, you just accept it. That’s just the kind of movie this is. For their parts, Wiig and Mumolo are hilarious. Sure, this feels a lot like an “SNL” sketch that someone extrapolated for 100 minutes, but they pull it off. Wiig, especially, is in her element. All the mannerisms we’ve seen from her previous characters are present here. Star feels like the culmination of every “SNL” character Wiig ever played—Sue the Surprise Lady, aging actress Mindy Grayson, and she wasn’t even in that mom jeans sketch but it sure felt like she was. Truthfully, I don’t remember Annie Mumolo from her roles in “Bridesmaids” or “Bad Moms” (or “Joy,” or “The Boss,” or “This is 40”). I had already seen more than half her filmography, but to me she was an unknown. Not anymore. From now on, for better or worse, I’ll think of Barb when I see her name. Then there’s Jamie Dornan, who shows that he can act in a comedy as well as he can in any other genre—that is to say, only moderately well.

“Barb and Star go to Vista Del Mar” was announced almost two full years ago and was shot in July of 2019. If it feels like a movie from a different world, that’s because it is. While its comedy may be a bit too much for some, for others I expect it will be just the care-free escapism they’re longing for in this world that’s focused on just one or two major news stories. If that sounds good to you, put on some Jimmy Buffet, throw back a couple of margaritas, and go to Vista Del Mar with Barb and Star this Valentine’s Day.