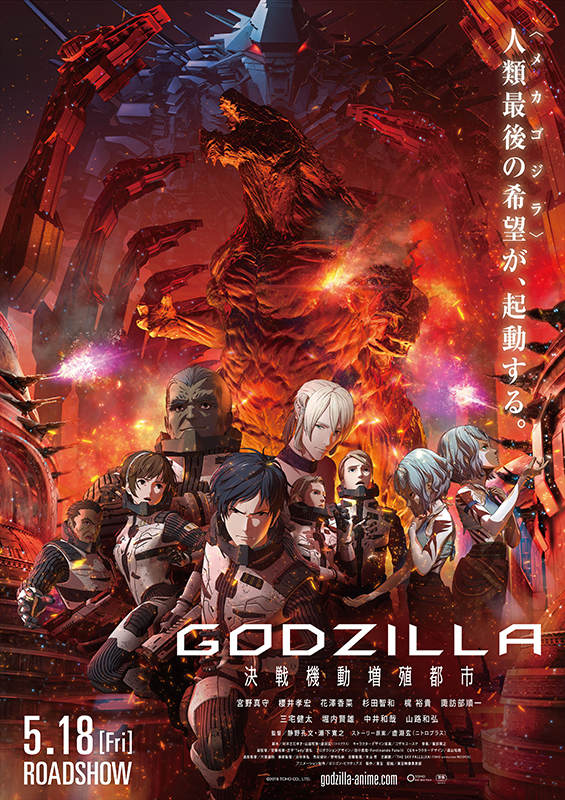 After several films where the characters had continued attacking Godzilla only with tanks or with Mechagodzilla, the animated films have shown that attacking the monster takes a bit more creativity. “Godzilla: City on the Edge of Battle” takes too much time to set up this elaborate plan (again, we don’t see Godzilla much until the final thirty minutes), but it continues the story of the first movie in a natural and plausible manner.

When Haruo wakes up on Earth after the not-quite-successful attack on Godzilla in “Godzilla: Planet of the Monsters,” he realizes he’s in a sort of hut. It almost looks like civilization. The others find their way there, too, and realize that a civilized race of humanoids lives underground. They also find the scraps of a Mechagodzilla that they use to make three flying robots called Vultures to stage their next attack on the most formidable foe, Godzilla.

After a second movie, I’m realizing that Haruo is a mostly one-note character. He’s angry at the world and determined to defeat Godzilla, but his one-track mind doesn’t let him think about much else (besides, notably, caring about a Native girl he encounters). Then again, his character is the only one to have any characterization at all. The others have still not made much of an impression. I’m still holding out hope that the third movie builds upon one or two of the secondary characters and gives their actions in the first two movies a little more context or meaning.

“City on the Edge of Battle” uses familiar themes of exploitation that we’ve seen in “Pocahantas,” “Avatar,” and real-life America. But the most exciting parts of the movie involve Godzilla himself, who, by the end, looks a bit like the overheated version we saw in 1995’s “Godzilla vs. Destoroyah.” Had there been a bit more monster madness, I think I would have had a higher opinion of the movie. A post-credit scene teases the coming of another monster in the third movie, which has me excited. It’s about time this animated trilogy bring in some friends.