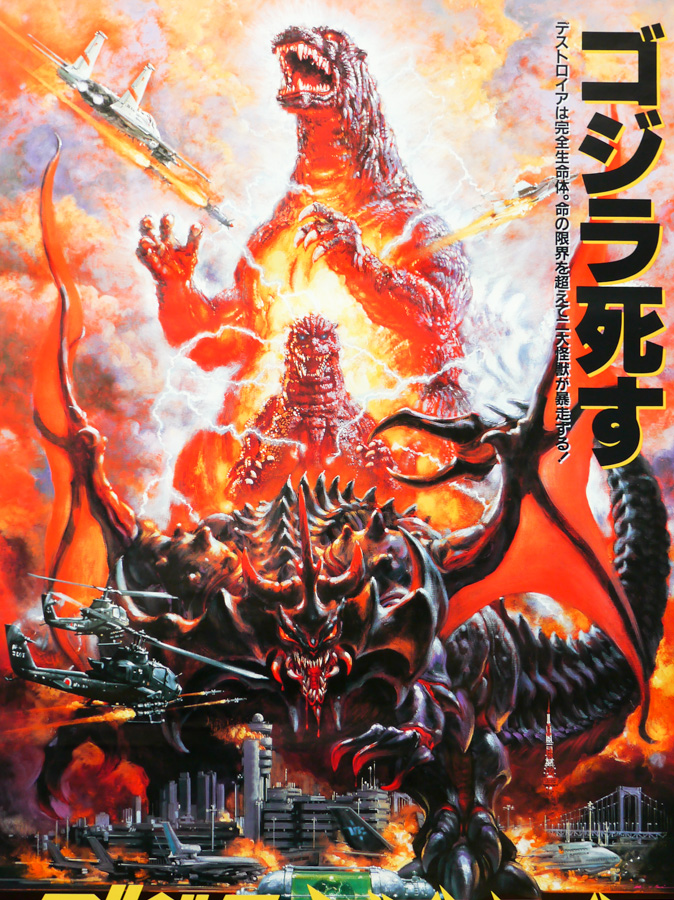 Intended to be the final Godzilla movie (but haven’t we heard that before?), “Godzilla vs. Destoroyah” really puts the big guy through the ringer. Right away, we see him attacking Hong Kong. But he looks radically different—bigger, redder, and angrier. Turns out, he’s feverish. Like, ready to hit 1,200 degrees Fahrenheit feverish. Scientists guess that he’s been exposed to more nuclear energy than he can handle, and if it gets worse, he may melt down like a nuclear reactor—and take a chunk of Asia with him. To make matters worse, human-sized crustaceans are appearing from the sea, also angry and powerful. They might have been altered by the oxygen-destroyer that killed Godzilla fifty years ago during the events of the original movie. They keep growing more powerful, and eventually combine to form Destoroyah, a beast more powerful than Godzilla.

The last Heisei-era Godzilla film (even though Japan’s Heisei era didn’t end until 2019), “Godzilla vs. Destoroyah” is also the last Godzilla movie that composer Akira Ifukube ever worked on. Ifukube worked on about a dozen of the Godzilla films directly, but his score was used in almost every single one (and would continue to be after this movie, and even after his death in 2006). His score in “Godzilla vs. Destoroyah” uses many of the pieces from his original score (what is known as “Godzilla’s Theme” probably most of all), but also rounds it out with some new orchestral work. His booming music is a fitting sound to end the Heisei era on…truly, it’s the only music that could have lived up to the moment.

But today, the moment is undercut by the knowledge that Toho would revive the franchise again just a few years later. Perhaps “Godzilla vs. Destoroyah” might have been more emotionally powerful had I thought this was really the end, but I know that it’s not. And with that in mind, the movie doesn’t impress me much. First, the science seems really shoddy…and not in a fun and excusable way. Characters kept saying oversimplified statements about their scientific opinions in ways that are totally unsubstantiated by facts. When they see a glowing hot Godzilla, one is quick to conjecture about the cause…and everybody takes it as the gospel truth without looking into it. What happened to the scientific method? This had never bothered me in past movies, but here, where the plot is more grounded in reality than many of the other Godzilla movies, I was annoyed.

When Destoroyah combines to be the giant beast who will take on Godzilla, he looks pretty awesome. But when he’s just a bunch of murderous little monsters, the character design is less impressive. During the many scenes where they’re shown attacking civilians and soldiers, it’s apparent that they’re puppets being moved around by people. Not on strings, and not with someone inside, but some other way (like a remote control toy car). They’re not convincing at all. Feverish Godzilla, though, might be the coolest one yet. I said that same thing just two movies ago, when I watched “Godzilla vs. Mechagodzilla II,” but I think this suit even tops that one. If only the rest of the movie reached that level of coolness.