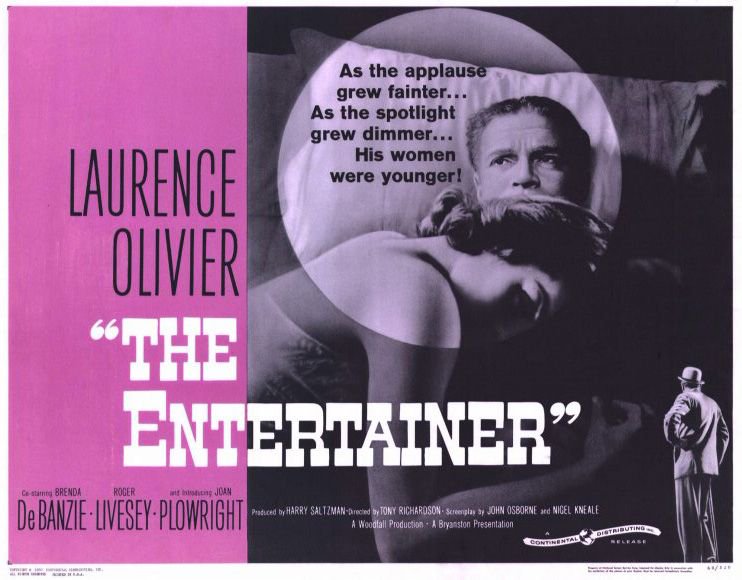 Over the past few years, as I have inched closer to the age of 30, I have found an increased fascination with stories of men approaching death (morbid, I know). Specifically, I love stories about aging creatives coming to terms with their own fading irrelevance. Normally, these stories are about men—movies like “Limelight,” “8 ½,” and “Youth” are great examples—but just this year, “Truth” highlighted the reflections and regrets of an aging actress. As the old saying goes, “Better to be a has-been than a never-was.” That old line pops up in director Tony Richardson’s 1960 adaptation of the stage play “The Entertainer,” in which Laurence Olivier (who originated the role on stage) plays a fading vaudeville performer in England whose latest show is struggling to pay for whatever project he might want to do next. It’s a prime example of this kind of story, but this one adds a strong element that doesn’t always appear in these movies—family.

Archie Rice (Olivier) is a womanizer with a depressed second wife (Brenda de Banze), three children (Albert Finney, Alan Bates, and Joan Plowright), and a father (Roger Livesey) who used to be a singer himself. His marriage is struggling, just like his latest under-attended stage show. He’s always looking ahead to the next one, in his career and his marriages. His daughter, Jean, the only cool head in the family, tries her best to keep him on track…but it’s no easy feat.

“The Entertainer” is only the second Laurence Olivier movie I’ve seen, after “The Marathon Man” (one of his last major roles). I was happily surprised by how affably brilliant he is. This role earned him one of his ten Oscar nominations for acting (only Jack Nicholson has had more among men). He had the looks of Ewan McGregor and a sense of humor closer to Robin Williams than anyone else, maybe. He puts on quite a show as Archie Rice. I was also impressed with the cool seriousness of Joan Plowright. A year later, Plowright would marry Olivier, her on-screen father. Archie Rice spends much of the movie courting a beautiful girl his daughter’s age, so perhaps it was only natural that Olivier brought his character to life.

The story transitions from character study to family dramedy whenever Archie comes home. Joan Plowright’s Jean becomes an important character in her own right, even appearing in several scenes without her father. It adds layers to the story and adds a nice amount of context for Archie’s background, but it also spreads our attention too thin. We don’t even meet Archie for about ten minutes. The first time we see Archie’s second wife, she’s sitting with Archie’s father, who lives with them. I thought she was his mother for most of the movie because we never see them act like a couple. Maybe I missed the conversation when that relationship was clearly laid out. It was almost as if I was expected to see the stage play first. I was confused.

“The Entertainer” shows off Laurence Olivier’s talents and gives him a terrific character in Archie Rice. But Olivier already knew that. He had played Archie many times before on stage, and it shows. He’s the reason you care about this movie.