Abe, a 12-year-old chef played with pubescent sincerity by “Stranger Things” star Noah Schnapp, is something of a cultural fusion. His dad (Arian Moayed) is a lapsed Muslim, his mom (Dagmara Dominczyk) is a semi-observant Israeli Jew, and each of Abe’s grandparents hope that he’ll pick their religion as he grows into manhood. But Abe just wants to cook. When he meets a Brazilian chef, Chico (Seu Jorge), who specializes in fusion recipes, he inspires Abe to try new things. But Abe is growing up too quickly for his parents, who respect his passion but would rather he find some friends and stay a kid a little longer.

The “Stranger Things” kid is stranger than ever in this awkward performance. It suits the role, though! Abe is a mature kid who seeks rapport with adults before other children. This is only Noah Schnapp’s second role since starting on “Stranger Things.” He’s something of a late bloomer, after some of his child co-stars have found success in blockbusters like “It” and “Godzilla: King of the Monsters.” His “Abe” co-star Seu Jorge is best known (though I was unaware of him) as a musician, and his David Bowie covers from a decade ago got praise from Bowie himself. His role in “Abe” is nominal, unfortunately, but he does well regardless. 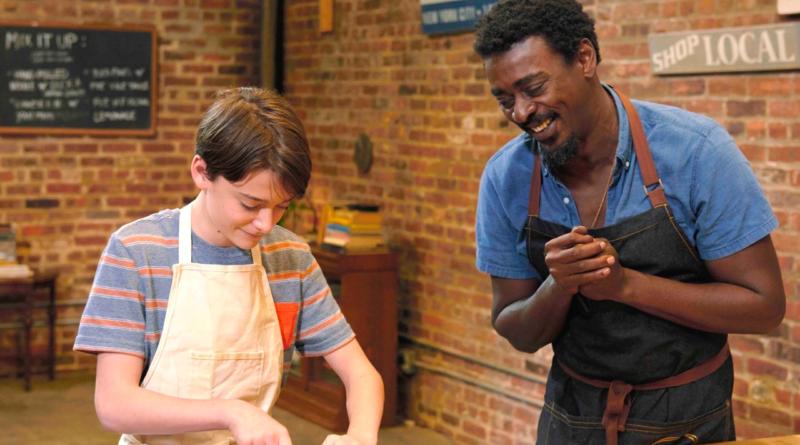 Chico criticizes one of Abe’s early recipes as bold, but not very good. I feel like “Abe” is that way, too. Spunky voiceover narration and hashtags that occasionally pop up on screen (Abe’s Instagram account is a major character) give “Abe” a unique texture, but that doesn’t always translate to great taste. It might seem that “Abe” is an enjoyable—if slight and forgettable—food movie with plenty of tasty sights and sounds (it seems that Seu Jorge’s samba influence snuck into the bouncy film score), but I’d be remiss if I never mentioned how deep into Abe’s family drama this movie goes. His grandparents are major players (shoutout to Mark Margolis for being great at 80), and the drama between Jew and Muslim is important to the plot. It’s kind of the whole point, actually. Does “Abe” do a good job trying to broker Middle East peace? You’ll have to be the judge of that, I guess. But it has a fun time trying.