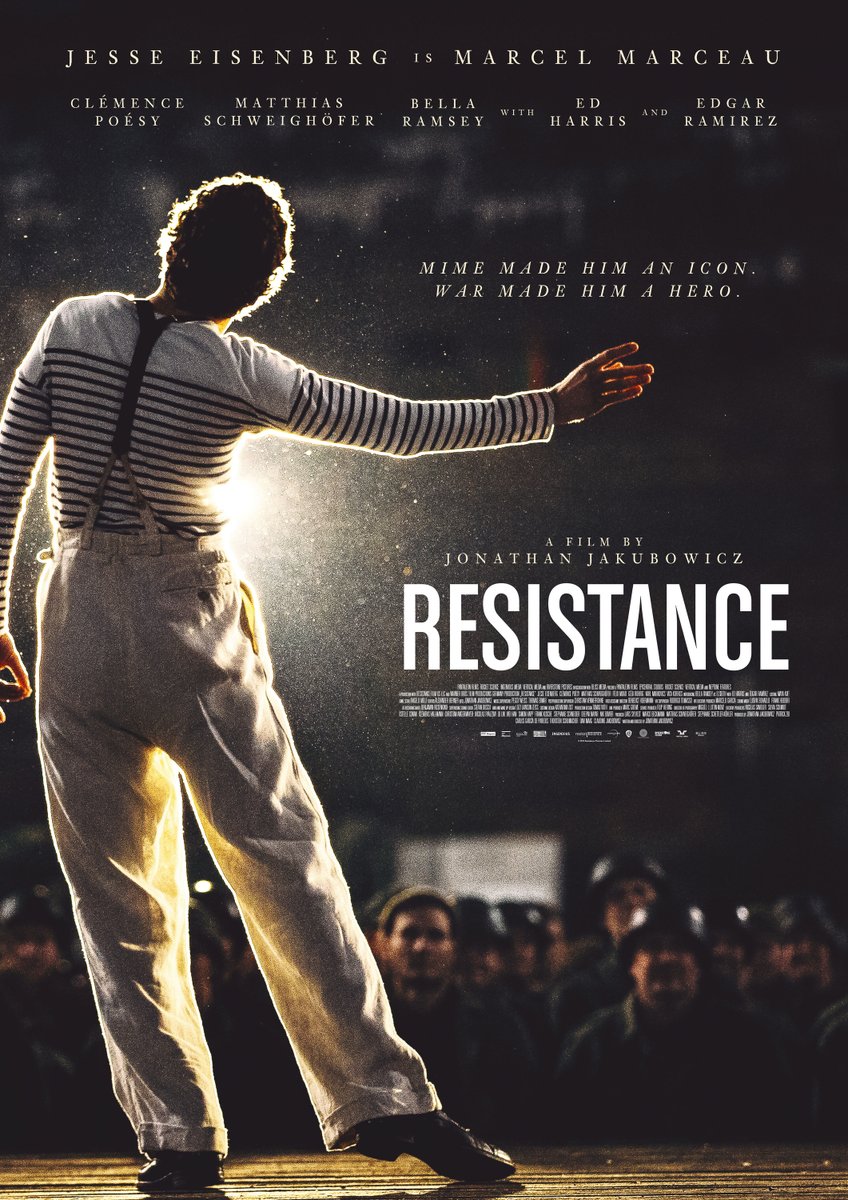 “Resistance”—the second English-language feature from “Hands of Stone” director Jonathan Jakubowicz (Venezuelan-born, but of Jewish-Polish descent)—tells the remarkable true story of Marcel Marceau (played by Jesse Eisenberg), a French actor and mime who, in his younger years, helped rescue thousands of children orphaned by Nazis. Working with his brother (Félix Moati) and a team of resistance fighters, Marceau (a name he took on to survive in France) fought against Nazi occupiers before decided that instead of fighting an unwinnable battle, they would all be better off protecting the children whose parents had already been killed.

Eisenberg quite literally plays a clown, but “Resistance” is his most serious role in years. It’s also one of the best performances of his career (which goes back almost twenty years now, it might surprise you to realize). Marcel is an iconic character, and Eisenberg clearly worked hard in an effort to do the part justice. But we never get to know any of the other characters nearly as well. His father, Charles Mangel (Karl Markovics), a straight-laced butcher who discouraged Marcel’s artistic endeavors, was also, in a twist, an amateur singer. I could watch an entire movie told from his perspective, but we don’t get to spend much time with him here. And yet, while we learn the most about Marcel, with only this snapshot of time to look at, we don’t get to see his full picture, either. Instead of seeing the full scope of his life story—which was, by all accounts, remarkable for all of his 84 years—we only see the part about his wartime heroism, a story told better in movies like “Schindler’s List,” “Hotel Rwanda,” and plenty of other stories from over the years. What makes Marcel Marceau’s story different (is being a performer) is only a minor part of “Resistance.” That’s a shame.

But as easy as it is to want more from a movie about Marcel Marceau, it’s still easy to appreciate the movie “Resistance” is. Though I’ve been known to use the word “accessible” as a pejorative, I liked that “Resistance” was particularly easy to follow. I say this because many movies that cover years-long spans of time often struggle to fully explain everything. Here, though, we’re allowed to live in each moment before the story jumps a few months or a year. It never feels like Jakubowicz’s script is trying to rush us through history. Besides a few slow periods (especially after the halfway point), “Resistance” keeps a steady pace almost all the way through. One problem I had was its use of a senior Nazi officer as our singular villain. I’ve always had trouble believing that high-ranking officials would ever make it their purpose to take down a person or small group, but in movies like these, we almost always see that one angry Nazi stand in for the entire awful lot of them. But ’tis only a minor qualm.

“Resistance” tells a story of courage everyone should know. It doesn’t tell it quite as well as I might have hoped, but it’s certainly a good primer to Marcel Marceau’s story. Maybe it’ll inspire some viewers to dig deeper. I know I will be.