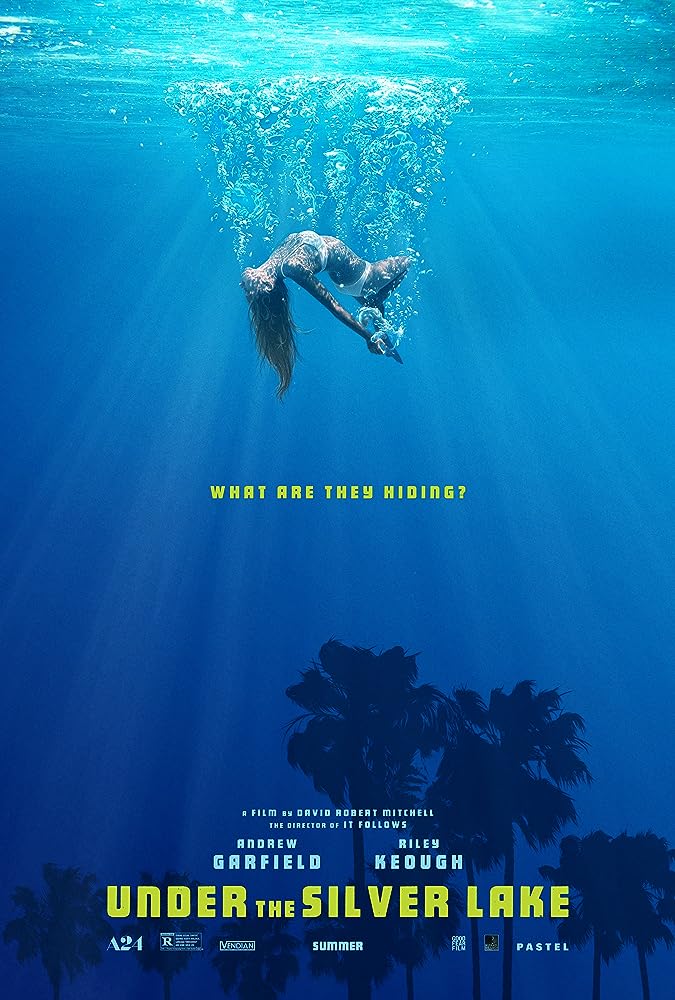 For writer/director David Robert Mitchell’s follow-up to the critically successful 2014 horror film “It Follows,” he decided to weave a wild Los Angeles-set tale of intrigue, conspiracy, and zines. In “Under the Silver Lake,” everyone is a little off, but in a believable, only-in-California way. That includes leading man Andrew Garfield, playing an unemployed loner named Sam who faces eviction in five days. But that’s not what’s bothering him at the moment. Instead, he’s become obsessed with the disappearance of a girl (Riley Keough) who invites him into her apartment a day or two before she vanishes without a trace. As he investigates, he discovers that she’s not the only unexplained disappearance. Dogs, too, are being taken at a scary rate. Is there something supernatural or mythical behind this, as a local zine artist (who Sam befriends) suggests?

It doesn’t take long to figure out exactly what kind of tone “Under the Silver Lake” hopes to take. From the earliest scenes, the work of cinematographer Mike Gioulakis and composer Disasterpeace (real name Richard Vreeland) evoke noir films of old. Vreeland’s score, for instance, crescendos in an epic orchestral performance so loud I had to turn my TV down. But while David Robert Mitchell’s script shows promise, it fails to flow smoothly to its finale. The first two acts give the impression that neither Mitchell nor Andrew Garfield’s Sam was really that interested in getting to the point. But at the same time, running around L.A. looking desperately for clues is, rather conveniently, all Sam does. At each turn, he’s encountering a person he’s seen before who is connected in some way. But after so many of these informative chance encounters, you begin to tire of the old way of telling these types of noir stories. Even if you don’t have to reinvent the wheel, you should change the tires every so often.

With all of these characters coming and going, the only true constant is Andrew Garfield. In his ninth movie in as many years since breaking onto the scene in 2010’s “The Social Network,” Garfield shows he’s capable of handling a wide variety of characters and films. Kudos to him for making “Under the Silver Lake” just quirky enough to stand out. Too bad Mitchell’s script ran him all over L.A. and then didn’t give him the sort of satisfactory conclusion that would’ve warranted such a long (2 hours and 20 minutes) and involving film.

Despite a standout performance by Garfield and some great technical aspects, “Under the Silver Lake” feels like the beautiful shell of a better movie that was never written.

One thought on “‘Under the Silver Lake’ spins an elaborate noir story, but not one worth sticking around for”