Can we all agree to stop laughing at 1990s references in movies? Nostalgia bait is a cheap form of comedy. Why is it funny when someone suggests to Carol Danvers (Brie Larson) that she shop at a Radio Shack? It’s usually anachronistic, for one thing. People actually in the ‘90s wouldn’t reference ‘90s things with such relish as we see them referenced. Only looking back would anyone ever talk about Blockbuster like that, for instance. (Side note: I grew up with a Family Video, and there are still hundreds of those—so stop your whining, Blockbuster apostles.) That said, actually, “Captain Marvel” has far fewer ‘90s references than I expected it would, and much of them are seamless and unremarked upon—thank goodness. For a movie billed as a must-see for people needing a ‘90s flashback (Marvel made a throwback website to promote the show), most of what we get is relegated to the soundtrack and wardrobe (like a Nine Inch Nails tee shirt, or a florescent yellow tank top).

Also: can we be done with jokes about what aliens/people from faraway lands/other planets know and don’t know regarding the English language? Like one character knows what a filing cabinet is, but doesn’t know what a cat is. How? Carol Danvers doesn’t know the phrase “welcome wagon,” but she never once asks for clarification about anything else that is said. It’s very inconsistent. “Wonder Woman” was full of these stupid jokes, where we were meant to laugh at Gal Gadot’s character for not understanding some things, even though so many other new things went by without her batting an eye.

Those are just a couple examples of how Marvel has moved toward humor in the place of of high-stakes action. Way too many superhero movies lately have severely skimped on the peril. Where are all of the innocent civilians who could lose their lives? Even if we count the alien civilians in “Captain Marvel,” there are very few innocent casualties. Marvel’s focus on comedy can be fun at times, but when the audience isn’t made aware of the stakes, it’s difficult to care whether or not the hero “saves the world.”

Also, “Captain Marvel” is probably another unnecessary Marvel movie, like “Doctor Strange” or “Ant-Man and the Wasp.” They serve one small purpose—in this case, giving backstory for the one new character in “Avengers: Endgame”—and yet it’s given one of the biggest movie budgets of the year. But “Captain Marvel” is better than those other two unnecessary entries in the MCU. For all my complaining (man-plaining?), “Captain Marvel” can be a lot of fun. It does have a few good fight scenes, for one. Maybe not enough for my liking, but a few. And the fight choreography (mostly hand-to-hand) is fun to watch, unlike the trickster fighting styles of some of Marvel’s other heroes (the ones that use their powers and keep their distance). Even though I had trouble understanding exactly what her powers were. They seemed to increase/change throughout the movie. At her best, she was like Mario after getting a star.

Plus, “Captain Marvel” has Jude Law, which already makes it better than it could have been. And Brie Larson does a commendable job, even if her character’s personality (by design) can sometimes be a bit distant. Samuel L. Jackson has his most screen time as Nick Fury (don’t quote me on that, but I’m pretty sure), and I really enjoyed it. “Captain Marvel” fills in his backstory, too, which has a more immediate payoff (since you already know what happens after the movie, in his case). 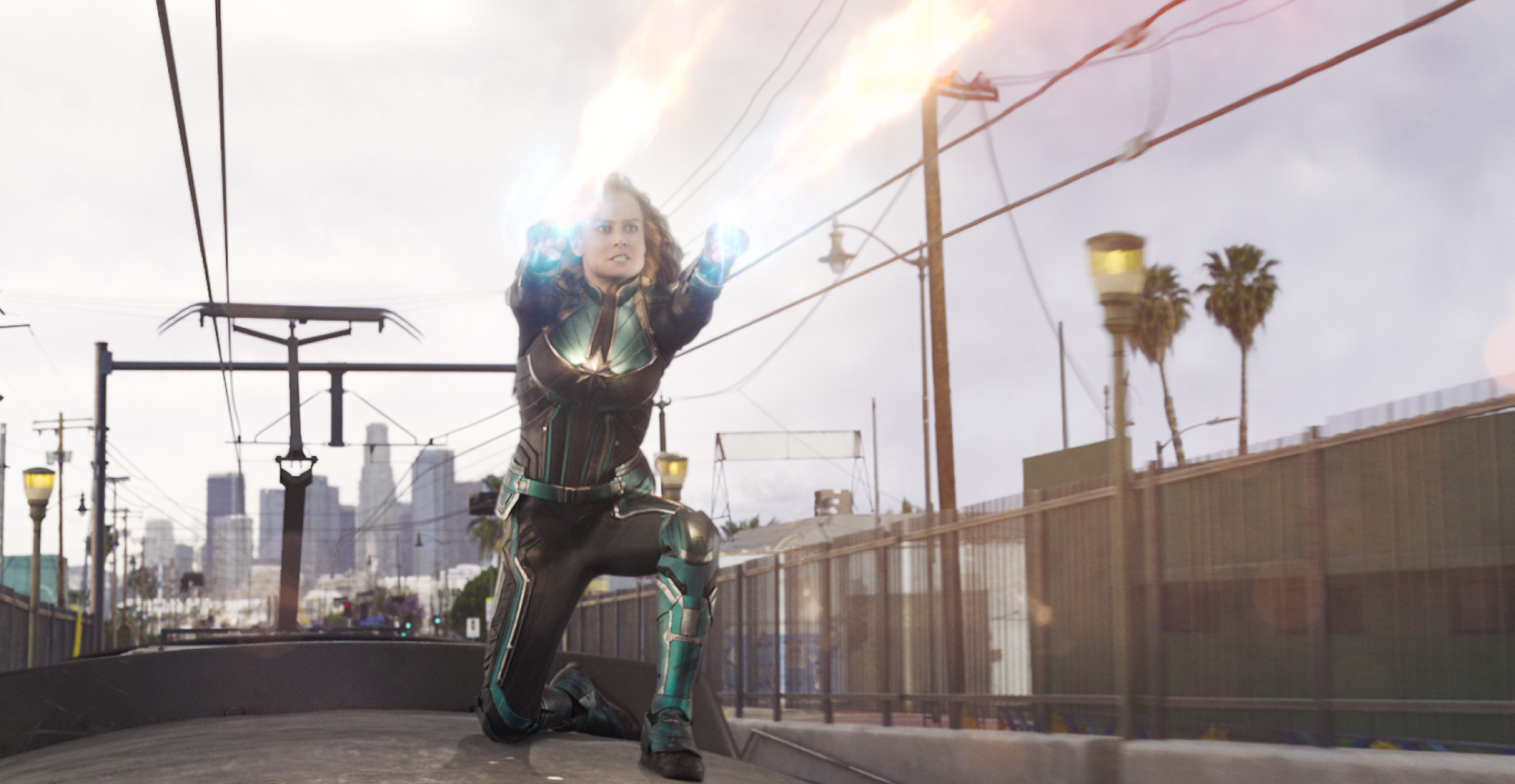 Side note: “Captain Marvel’s writing team is comprised of four women and one man (who also co-directed, with his wife, who also co-wrote). “Wonder Woman,” on the other hand, was written by all men. Wonder Woman also had a more revealing suit—which led to several comments on her appearance by male characters—and a love interest, who (maybe it’s just my opinion?) took advantage of the virginal outsider by wooing her with his Chris Pine charm. What I’m trying to say is that “Wonder Woman” may have been the first major superhero movie led by a woman, but “Captain Marvel” definitely feels more feminist (in its creation and its content), if that interests you.

Marvel diehards will eat “Captain Marvel” up like they eat every other MCU entry up. Sometimes they’re dead wrong, misled by their blind devotion, but this time there are some good qualities to back up their admiration. “Captain Marvel” won’t go down as one of the best superhero movies of all time (for me, the benchmarks to beat are still “Spider-Man,” “The Dark Knight,”  “Guardians of the Galaxy,” and “Logan,” in case you want to use that to weigh my superhero movie credibility), but we’ve certainly been exposed to a lot worse.