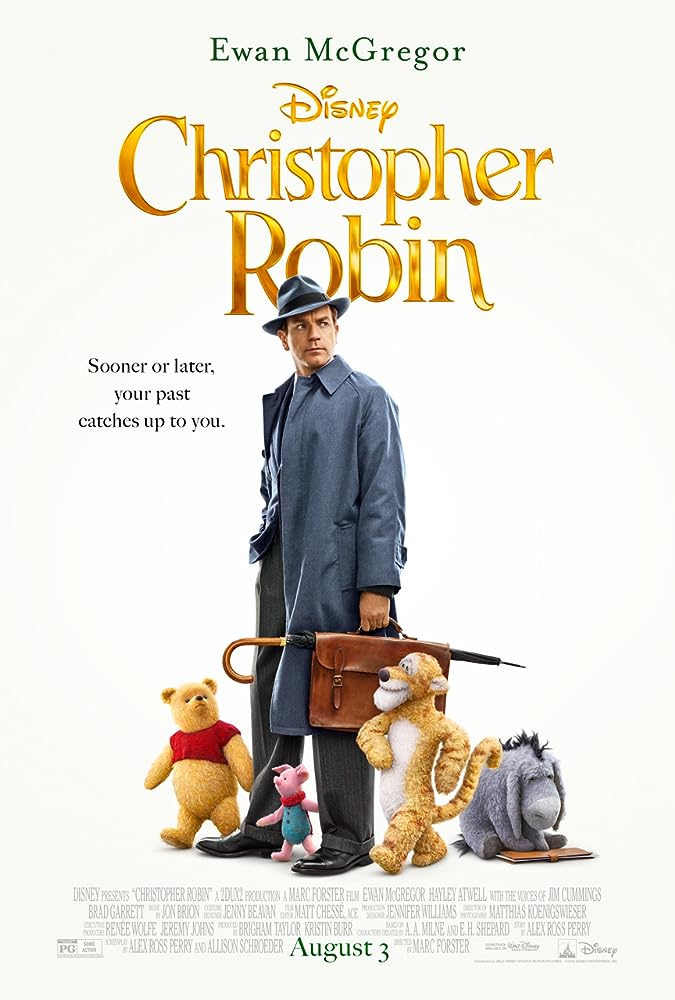 Disney rehashes many of A.A. Milne’s original stories and trots out plenty of classic Pooh-isms in its sweet-as-honey follow-up to the 90-year-old tales of Christopher Robin (Ewan McGregor) and his lovable, furry friends from the Hundred Acre Wood. Sure, the plot of “Christopher Robin” (which finds the title character as a grown man prioritizing business over his wife and daughter) is about as predictable as movies come, but that doesn’t make it any less enjoyable. Not in this case, at least.

I was worried when I heard that “Christopher Robin” would ditch the animation style of “Nine Old Men” club members Eric Larsen and John Lounsberry (and Frank Thomas, Ollie Johnston, and Milt Kahl, also of the famed Disney animator group, who created the Tigger and Piglet animations we know and love) in favor of a more realistic CGI take on the characters. Though they make occasional use of E.H. Shepard’s book illustration style during some scene transitions, for the most part the style that we’re used to is gone. So, too, are (most of) the voices we’ve gotten used to hearing. Sterling Holloway, who voiced Pooh in the earliest Disney shorts, died back in 1992. John Fiedler, the original voice of Piglet, died in 2005 after last voicing the character in “Piglet’s Big Movie.” The others either passed away or retired from voicing their characters, but even 2011’s “Winnie the Pooh” adaptation had a more faithful voice cast than we have here. The only saving grace is Jim Cummings, who has voiced both Pooh and Tigger since the late 1980s. Without him, I don’t think I would have liked the movie at all. Taking away the classic hand-drawn animation style (the 2011 film was Disney’s last hand-drawn film until “Moana”) and most of the familiar vocal actors was almost enough to ground “Christopher Robin” before take-off, but the film’s reliance on Pooh and Tigger (as well as Ewan McGregor) gave it a chance to succeed. Plus, I guess Brad Garrett’s fitting Eeyore voice does the job. But that’s about all the credit I’m willing to give in this department.

It’s true that “Christopher Robin” is front-loaded with enough “workaholic absentee father” sadness to make anyone feel a little down. And that Christopher’s inevitable turnabout (with the help of his pals and his daughter, of course) can be seen from a mile away. But somehow, none of that matters, because Ewan McGregor is characteristically impeccable and because A.A. Milne gave the world a treasure trove of wonderful stories and quotes to pull from. Pooh spends the movie quipping things like “People say nothing is impossible, but I do nothing everyday” that you can’t help but find adorable and agreeable. Plus, Let’s face it: even on their worst days, Disney doesn’t make bad movies, and neither does Winnie the Pooh. “Christopher Robin” is a perfectly sweet family movie full of everything everyone loves about the adventures of Winnie the Pooh and friends.