Up until now, you probably know Logan Marshall-Green as “that guy who looks kinda like Tom Hardy.” But “Upgrade,” his futuristic neon-noir action movie, should prove to be a star-maker for the 41-year-old actor (only one year younger than Hardy). It might just help him shake off that association for good.

In a future where technology can drive your car, make you a protein shake, and autonomously fly police drones (it doesn’t sound that far away, really), the newest innovation can also help a man walk. That’s what happens when Grey Trace (Logan Marshall-Green) is paralyzed by a gang of thugs. Right before they paralyzed him, though, they also shot his wife (Melanie Vallejo). With the help of his upgrade, Grey will do his best to track down the men and avenge his loss—as long as the technology attached to his spinal cord will cooperate. 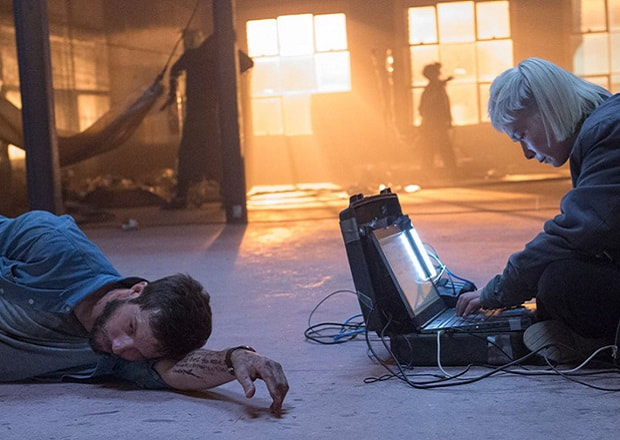 Leigh Whannel, a veteran actor and writer (“Saw”), takes a pretty drastic turn for his second directing effort (after “Insidious 3”). “Upgrade” is listed as part horror movie on IMDb, but there’s nothing especially scary about it. Instead, “Upgrade” is more like a revenge thriller mixed with an action comedy. Grey Trace is a vocal skeptic when it comes to technology—he prefers his muscle car to his wife’s self-driving robot car—so when he has to rely on it entirely, his reactions can cause some laughter in the audience. Marshall-Green flexes his action and comedy muscles in this one. But while the setting is stylishly neon, the acting entertaining, and the action kickass, the story is a straight-forward amalgam of revenge thrillers we’ve seen in the past, with a few extra surprises. It’s “Payback,” “Oldboy,” “John Wick,” “Death Wish.” It’s its own thing, of course, but it’s also all of those movies. A different leading man, a different setting, but a similar motive, a similar villain, a similarly twisting plot that wants you to believe one thing until it wants you to believe something else. If you think this sort of movie has worn out its welcome, you can skip “Upgrade.” But if a technological upgrade to the genre sounds appealing to you, step right up. If you ask me, “Upgrade” does just enough to make this already-fun genre more entertaining than it’s been in a couple years.