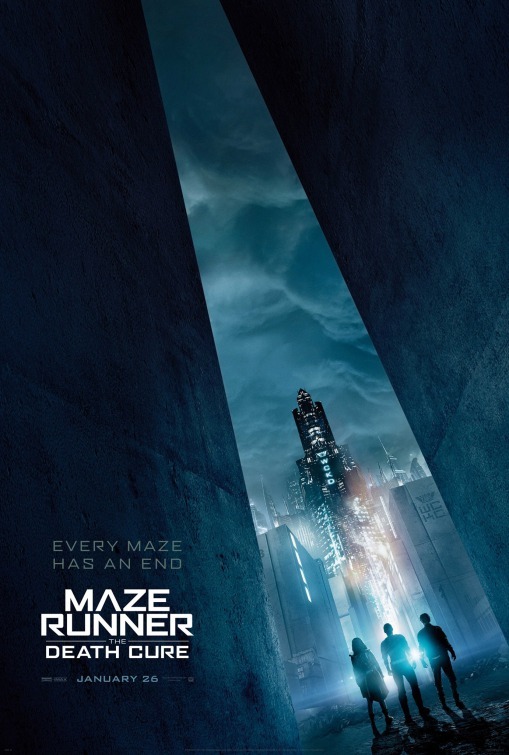 With each sequel—first, 2015’s “The Scorch Trials,” and now, “The Death Cure”— the “Maze Runner” franchise (based on James Dashner’s YA novels) has strayed further and further from its simple, humble roots. In the first film, Thomas (Dylan O’Brien) and Teresa (Kaya Scodelario) are dropped into an impossible, dangerous maze, without any memory of their life up to that point. After much internal strife amongst the maze kids, Thomas and Teresa (and many others) managed to escape the maze. But their rescuers were none other than the people who put them in there in the first place! So Thomas (and fewer others this time) escaped the facility in which they were being kept. Unfortunately, Minho (Ki Hong Lee), who until Thomas’s arrival had been the boys’ fearless leader, didn’t make it out. Now he’s been transferred to the highly-guarded WCKD headquarters in the middle of the last remaining city, which is teeming with security. Not content with freedom if Minho remains a captive, Thomas leads a daring rescue mission with Newt (Thomas Brodie-Sangster), Fry (Dexter Darden), Brenda (Rosa Salazar), and others, to save their friend.

The “rescue mission” trope is a tale as old as time, but it didn’t get so popular without a good reason. Even if you haven’t seen a “Maze Runner” movie before, you can understand the desperation needed to run into the lion’s den, risking life and limb, to save someone you love. It’s an incorruptible plot—despite the uninspired dialogue and contrived plot twists’ best efforts to throw this movie off the rails. As for the ridiculousness of it, you can partly blame Dashner’s novels (I stopped reading after the first one—thankfully, the movies are better than the books). But as for the daring excitement of the movie, you can thank the big budget (and the visual and sound effects it could afford) and the larger-than-life orchestral score (from John Paesano, who lent his talents to the previous two “Maze Runner” movies, too). If “The Death Cure” is a January release and not a popular summer blockbuster, the sights and sounds could’ve fooled me.

This isn’t your little brother’s YA movie. Sure, there’s not a lot of blood, but the guns are real, the zombified flesh-eating sickies are real, the authoritarian antagonist and his trigger-happy state police are all very real…the peril is real. And, let’s face it…if you’ve seen “The Maze Runner” and “The Scorch Trials,” these 400 words won’t matter much to you—you’re already going to see “The Death Cure.” But maybe you were going to wait until it was on DVD—don’t. It’s exciting enough to see in theaters. So just get off your butt and go already.