After Darryl Ponicsan’s novel “The Last Detail” was adapted into a film starring Jack Nicholson in 1973, he decided to capitalize (albeit, thirty years later) by writing a sequel, “Last Flag Flying.” In Richard Linklater’s adapted script (written with help from Ponicson), the story is the same but the names have changed. I guess they didn’t want to mislead people into thinking the film would be a direct sequel, even if the novel was. The tricky situation Linklater had to manage—trying to adapt Ponicson’s sequel while not confusing audiences who had no idea the 1973 movie adaptation even existed—seems to have tripped up the accomplished screenwriter. Despite having all the pieces, “Last Flag Flying” ended up a disappointment.

The character played by Nicholson in 1973 is now in the hands of Bryan Cranston. Sal, as Linklater calls him, is a bartender in Virginia—as he tends to his dwindling few regulars, an old face walks in. Doc (Steve Carell, in the role originally played by Randy Quaid), an old war buddy, made the trip from New Hampshire, where he had settled. He takes Sal to meet up with the third member of their old trio, Mueller (Laurence Fishburne, originally Otis Young), now a pastor. The circumstances of this reunion are somber—Doc’s son, who was serving in Iraq, was killed in action. His body is being flown in soon, and Doc hoped his friends would accompany him on the long, hard journey.

Linklater’s script is tasked with introducing us to characters who have a rich backstory. Assuming none of us had seen “The Last Detail” was smart, but the backstory given to us is fractured…it’s treated as a mix between enigma and inside joke. It distracts from the story at hand, which has its own speedbumps. Linklater couldn’t tell the story straight, so he over-dramatized it by injecting mystery and twisty turns when all he really had to do was write some convincing and meaningful dialogue and let his accomplished cast do their best with it. Maybe he picked these mistakes up from the book—I don’t know. Either way, these trip-ups made “Last Flag Flying” look like a half-baked mockery of the Oscar-winning drama it could have been. 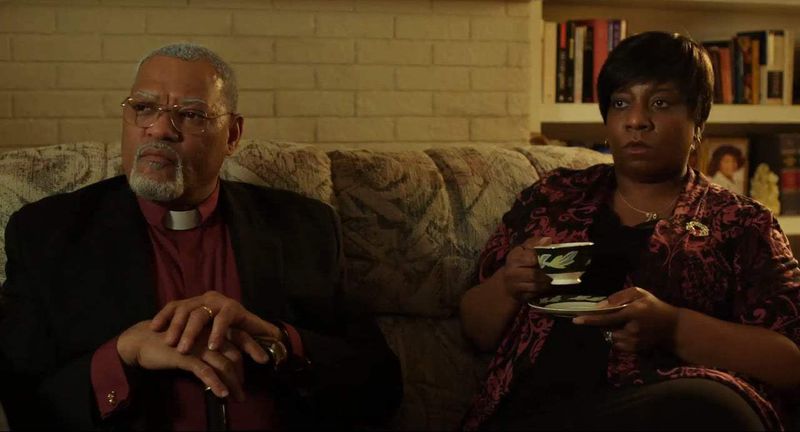 Speaking of Oscar nominations, “The Last Detail” received two for acting. In “Last Flag Flying,” Steve Carell may see similar results. He digs deep to deliver one of the year’s most emotionally stirring performances. Unfortunately, his character is in grief—he’s quiet, pitiable. He doesn’t get nearly enough lines, but when he gets the chance to talk he doesn’t spoil his opportunity. Cranston’s crass character gets the bulk of the action. Sal can’t shut up. But let me tell you…he is no Jack Nicholson. In today’s society, hearing a man—regardless of whether he’s a former soldier and this film is set in 2003—use racial slurs and flirt with thirty year olds and talk about his boner…well, it’s uncomfortable. Some people will love it, surely. He’s loud and proud. But for me, it was a little much—especially because I was expecting a serious story about a man’s grief. Cranston’s character (like, I assume, Nicholson’s forty years ago) sort of steals the show right out from under Carell—or tries to. But Carell is too good, thank goodness, for this movie to be completely hijacked.