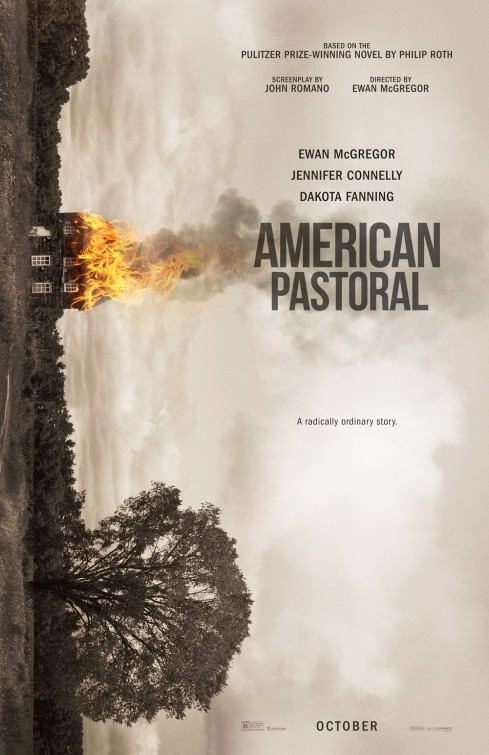 “Things don’t happen for a reason—they happen because they happen.” That’s how director and star Ewan McGregor describes Philip Roth’s seminal 1997 novel “American Pastoral,” the work that writer John Romano faithfully adapted for the screen in the 2016 film of the same name. After nine years and two failed directors, McGregor took the reins, only his second directorial effort (after 1999’s “Tube Tales”), and saved this movie from near-death. Thank goodness someone did.

Everything suggested the Levovs would live the perfect American life. In the 1950s, Seymour “Swede” Levov (Ewan McGregor), nicknamed because of his blue eyes and light hair (which made him an outlier in his mostly-Jewish New York high school), was a star quarterback and heir to his father’s successful leather glove factory. He married Dawn Dwyer (Jennifer Connelly), a humble farmer and beautiful Miss America winner. Together they had a lovely daughter, Merry (played by Ocean James, then Dakota Fanning), lived on an idyllic farm in the wealthiest suburb of Newark, New Jersey, and went about living their American Dream. Fast forward a few years. Already threatened by her mother’s beauty, and wanting the affection of her handsome father, Merry develops a worrisome Elektra complex. She develops a stutter, possibly as a coping mechanism. In high school, she becomes a rebellious anti-Vietnam War hippie, fed up with her parents’ centrist inclinations. Then, Merry runs away from home…but after a tragedy rocks their quiet town, police storm the house, claiming Merry committed a horrid crime. It shakes the family—and everything they thought they believed in—to their core.

“American Pastoral” is bookended by the audiobook-worthy narration of David Straithairn, playing an old high school acquaintance of Swede’s. It’s a small detail that goes to the heart of the filmmakers’ devotion to the original text, by all accounts a literary masterpiece from a man not new to seeing his work adapted to the big screen (from 1960’s “Battle of Blood Island,” starring Roger Corman, to 2016’s well-reviewed “Indignation”). Roth’s meandering writing style doesn’t lend itself to a 90-minute film treatment—“American Pastoral” is over 450 pages long—but when treated properly it can make for the perfect source. It’s told like the greatest generation tells stories. Rich in nostalgia and unreliable in its blind devotion to the mythology of “the good old days,” the way in which the Swede’s story is told becomes a story in and of itself. And while the end might not give you a satisfied, full feeling, just remember: “Things don’t happen for a reason—they happen because they happen.” I know that’s a weak excuse for a general slowness and anticlimax, but in this case it’ll have to do.

Because, the fact is, “American Pastoral” is far greater than its plot. Without exception, every actor hits their marks, nails every line. Maybe we can credit director McGregor, and his instinct for acting (and the idea that actors who direct tend to draw out good performances from other actors), or maybe we can just look at their track records. McGregor first, obviously. As the Swede, the whole movie revolves around him—his devotion to his daughter, his commitment to his wife, his drive for success. McGregor has been one of the industry’s most consistent actors, and I can’t help but enjoy nearly everything he does (his double-duty performance as two brothers in Season 3 of “Fargo” was one two of the best performances on television in years). Jennifer Connelly’s alluring subtlety is the perfect quality for the beauty queen mother who inadvertently causes her daughter’s rebellion (well, according to Merry’s therapist). Playing Swede’s hilarious father, Peter Riegert (who also played Artie, arguably the best addition to Season 3 of “Unbreakable Kimmy Schmidt”) makes for a wonderful side character, exerting pressure on Swede in his business and his parenting.