Scouts Guide to the Zombie Apocalypse (2015)

Back when I was 15, I would have probably given “Scouts Guide to the Zombie Apocalypse” a perfect 10/10 rating. The horror-comedy fulfills every teenage boy’s hero fantasy—kill the undead, save the day, kiss the hot girl. “Scouts Guide” thrives on childish gags and sophomoric humor. But the main characters are all high school sophomores—so maybe that’s not such a bad thing.

For the past couple of years, Ben (Tye Sheridan) and Carter (Logan Miller) have talked about quitting the Scouts program they’ve spent half their lives in. As they enter junior year of high school, their social lives might depend on it. But to celebrate their fellow scout Augie’s (Joey Morgan) newest badge, probably for the final time, Ben and Carter join him for a camping trip in the woods. Off the grid, they’re unaware of the viral infestation that quickly turns most of their hometown into a zombie wasteland. Together with a rough-and-ready young stripper (Sarah Dumont), the Scouts will band together to gather up survivors and flee town before there’s no way out. 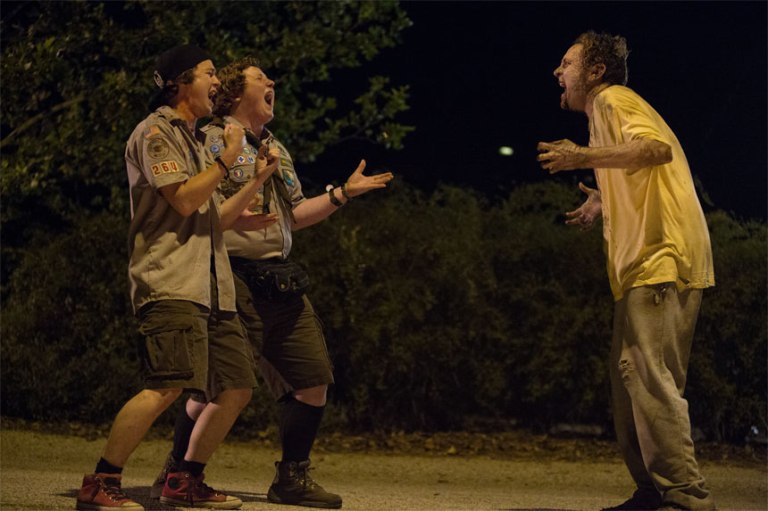 “Scouts Guide” relies on slapstick humor, gross-out humor, and just plain old bad humor to send up the overdone zombie genre. There are never-before-seen pieces of the zombie anatomy and one fake cat that will leave you rolling your eyes. It seems like it was made for teenagers, but if they were under 17 they would’ve needed a parent to see the R-rated comedy in theaters. Maybe “Scout’s Guide” had the long game in mind, though I don’t know if its DVD sales have supplemented the lackluster box office showing. But to the right crowd, “Scouts Guide” is a silly bit of old-school zombie fun, complete with B-movie special effects and high school comedy stereotypes—the straight-laced naïve kid, the chubby aloof nerd, the rebel, the hot sister. It lets you watch “Scouts Guide” mindlessly, which is really the only way to watch it anyway. If you think too much, you might realize how bad it is—like how the characters, for a while anyway, make all the wrong choices, abandoning perfectly good vehicles and leaving weapons lying around. It doesn’t even bother to explain the logistics of this particular zombie scenario, like how people become zombies.

“Scouts Guide to the Zombie Apocalypse” was eaten alive by critics, but to the right viewer, it’s a bunch of bloody, vulgar fun. Eat up.