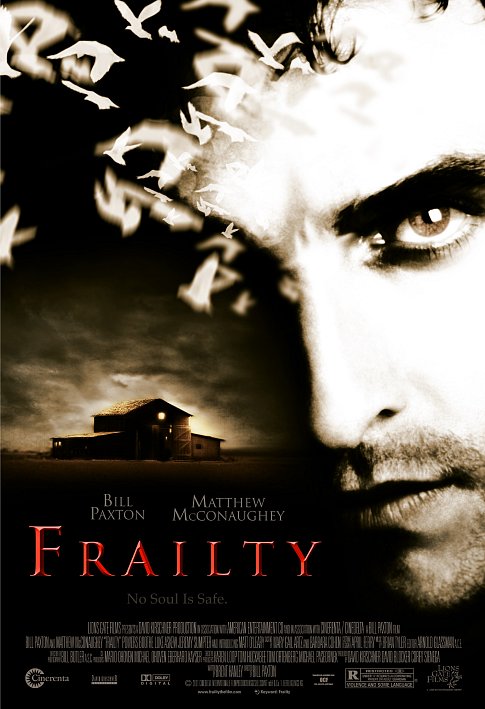 Bill Paxton, who died after surgical complications in February, made his directorial debut with 2001’s “Frailty,” an odd cult classic about a serial killer (played by Paxton) claiming to do God’s work, and his two sons—one buying into his dad’s lunacy, the other not so much. Meanwhile, flash-forward scenes show one of his sons (Matthew McConaughey) telling the violent tale to an FBI agent (Powers Boothe). “Frailty” was a first for screenwriter Brent Hanley, too, and also his most recent feature—though, at the time of Paxton’s death, they were in talks to team up again to adapt Joe Lansdale’s novel “The Bottoms” to the big screen. As far as I can tell, that project’s status is now up in the air.

Hanley’s overly dramatic, “dun dun DUN!” dialogue and voiceover narration (boringly done by McConaughey) is a source of frustration. It turns “Frailty” into a time capsule of turn-of-the-century thrillers, that predictable series of events leading to an unpredictable (but, at that point, pointless) conclusion. That’s the case here. You expect the little twists and turns. Up until the final fifteen minutes, it’s nothing special. But despite the dramatic dialogue, “Frailty” doesn’t incite the sense of dread a story like this deserves. You end up doing most of the work, fabricating the sense of doom and darkness a movie like “Frailty” should have no trouble conveying.

The phony performances have a lot to do with that failure. Bill Paxton is not in his best role, despite the fact that he’s holding the directorial reins. He’s too comfortable, too cheerful for someone who has just received a message from angels telling him that it is his duty to purge the world of demons before the judgment day. In a movie full of absurdities, he seems disturbingly okay with things. I think that’s the point, but the vibe that Paxton gives off is not dark or realistic enough to convince me of his true sinisterness. Somewhere between “Alright, alright, alright” and the Academy Awards, Matthew McConaughey is notably lacking the seriousness and commitment he brings to “True Detective,” where we saw him reprise his role of flash-forward true-crime storyteller. It’s hard not to laugh at his performance, which, looking back, is pretty terrible.

Until the “A-ha!” final twist, there’s little incentive to keep watching this uninventive thriller. “Frailty” will forever be Bill Paxton’s debut in the director’s chair, but, thankfully, he left behind a long list of credits we can be more thankful for.

One thought on “Director Bill Paxton swung wild with ‘Frailty’”