I’m sure real-life war reporter Kim Barker, whose memoir inspired “Whiskey Tango Foxtrot,” did actual good for the people of Afghanistan. On the contrary, actress Tina Fey mostly makes jokes on the Afghan people’s behalf. Screenwriter Robert Carlock (“30 Rock,” “SNL”) has a history of writing for Fey. Over the years, his writing has done her well. But it’s gotten pretty predictable. She’s never transitioned into anything more inventive than what we’re used to. If you’re not tired of Fey’s regular performances, “Whiskey Tango Foxtrot” might be for you. But if you’re looking for anything outside the box, you’ve come to the wrong place.

Fey’s character, Kim Baker (yes, one letter away from the real thing), a content writer for a news station, finds herself shipped to Afghanistan when the new War in Iraq takes away her company’s best war reporters. Baker is thrown in front of the camera for the first time as she interviews Marines, like General Hollanek (Billy Bob Thornton), and Afghan dignitaries, like Attorney General Ali Massoud Sadiq (played by London-born Alfred Molina, just one of the white actors shamefully playing Middle Eastern characters). She and the others in the press corps (like the characters played by Margot Robbie and Martin Freeman) try to get footing in a foreign land, while also competing to capture the best video footage to send back to their needy bosses. 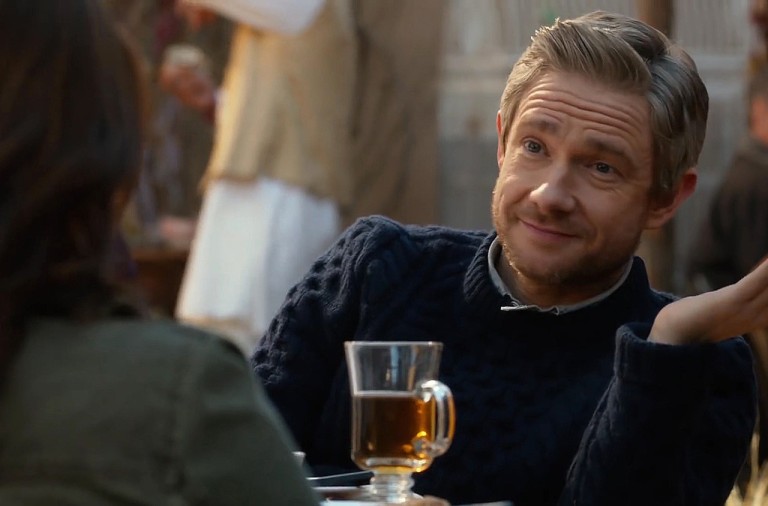 The WTF of the title might suggest something new or unexpected—or at least some consistent comedy—but “Whiskey Tango Foxtrot” doesn’t give you any of that. Its confusing tone leaves Fey joking about women drivers one minute, witnessing a bloody death the next. It’s hard to take seriously, but it also refuses to give us any good laughs. War-com isn’t a subgenre I want to see again. It’s like an “Eat Pray Love”/“American Sniper” mash-up. The comedy is muffled and the most exciting action sequence is rushed, shielded in almost complete dark, and ruined by Harry Nilsson’s folk song “Without You.”

For her part, Tina Fey isn’t bad. Like I said, she’s gotten comfortable in these roles, which change very little. Even to go as far as saying this might be her best film performance might not be a stretch, but considering “Baby Mama” and “Sisters” are on her resume that doesn’t say much. Martin Freeman returns to the big screen in an enjoyable role as a Scottish reporter. The acting isn’t the problem. But “Whiskey Tango Foxtrot” is a ten-year-old story that’s forgotten as soon as it’s seen. It leaves a lot to be desired.