“A force is awakening. Do you feel it?”

Director J.J. Abrams treats the newest installment in the “Star Wars” franchise with the utmost respect. In his hands, “The Force Awakens” feels utterly classic. Abrams avoids the use of computer effects when it could be done, and his cast is full of up-and-comers who, under his direction, become typical “Star Wars” characters. Domhnall Gleeson, Oscar Isaac, Adam Driver…all of them have a late-‘70s look and feel to them. Progress is made when it needed to be made, but Abrams knows that what ain’t broke shouldn’t be fixed.

As the opening credits tell us, the last remaining Jedi, Luke Skywalker (Mark Hamill), is missing. The First Order, under the command of the brains of the operation, General Hux (Gleeson), and the brawn, Kylo Ren (Driver), hope to find him first, to end the era and the Jedi and regain control over the galaxy. But the resistance, led by Leia (Carrie Fisher) and expert pilot Poe Dameron (Isaac) are close to finding a map that will lead them to Luke. When a former Stormtrooper, Finn (John Boyega), and a scrap metal scavenger, Rey (Daisy Ridley), come across the map, they also find the help of Han Solo (Harrison Ford) and Chewbacca (Peter Mayhew), who help them on their journey to find the resistance and put an end to the First Order. 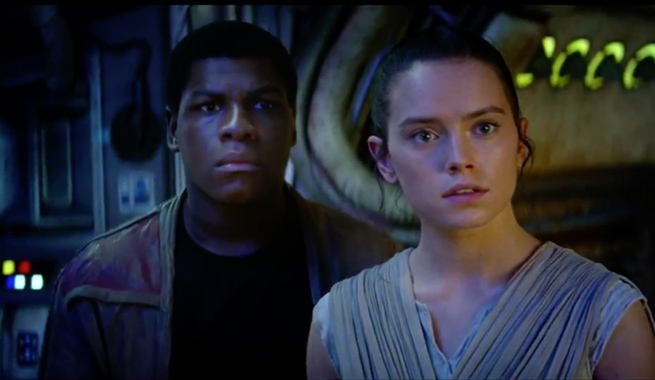 Finn is now one of my favorite characters in the “Star Wars” franchise. Boyega is a natural. He brings an unexpected humorous side to the film, without taking away from the seriousness of a situation. His scenes with Ford, whose age (and recently-healed broken leg) are apparent whenever we see him try to run, are especially comical. Verbally sparring with Han Solo, we’re reminded of the spirit and energy the scrappy young Han brought to the original films. Ridley, in her big-screen debut, will shock the world with her graceful handle on every situation. The acting force is strong with her. Gleeson ends a strong year on a high note with a passionate performance as the leader of the First Order. The fire he breathes into his character is refreshing, since the dark side has never been full of strong actors…especially not the ones working behind the scenes. But Gleeson’s words are his most powerful weapon, and he wields them with precision. Driver, on the other hand, ditches the “Girls” hipster vibe and becomes downright dreadful as Kylo Ren, whose very name strikes fear in my heart. Driver is zealous in his approach. He makes Ren a human character. Too often, “Star Wars’” good vs. evil story (one of the greatest good vs. evil stories in cinema history) is fraught with all-good and all-bad caricatures. Here, we see moral ambiguity and true humanity. Good isn’t always good, and bad isn’t always bad. Driver epitomizes that internal struggle.

A John Williams script, the fade-out editing, the unique galactic creatures…“The Force Awakens” has it all. Abrams scrapped the spirit of the prequels—which relied heavily on computer effects, told complicated stories which centered on a do-nothing Senate, and featured melodramatic acting that got caught up in emotions—and went back to what works. “The Force Awakens” hopes that you’re familiar with the “Star Wars” story, but it stands alone much better than the prequels.

I’m not sure what awakened in me, but I think it might have been a newfound belief that sequels don’t have to be bad. 2015 might have been the year of the franchise reboot. If “The Force Awakens” is the new trend, I think these are the movies I’m looking for.