“Whiplash” does to jazz what “Pi” did to math, what “Black Swan” did to ballet. In writer/director Damien Chazelle’s dramatic new film, a young jazz drummer (Miles Teller) has to win the approval of his drill sergeant instructor (J.K. Simmons) before he can become one of the greats – but, as is the case in all great movies of this kind, the instructor will stop at nothing to unlock the potential he sees in his student. Nothing. This freedom let Simmons unleash upon viewers an intimidating, commanding, and Oscar-worthy performance. He’s emotionally intense, dark, unsettling. I half expected him to rip through the screen and shout a profanity-laced insult directed at me. And as for Teller – well, he’ll have to put some blood in the game if he wants to get to the top. He has major acting chops, though he’s never had the chance to show them – until now. 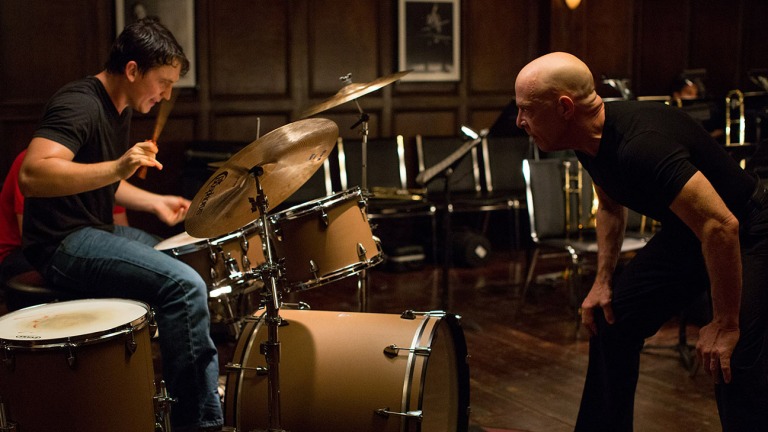 Together, Simmons and Teller are in a battle of wits, a dramatic waltz that comes to its ultimate climax – crescendo, if you will – in the film’s final moments. Final moments, which are, as expected, earth-shatteringly good. Part of that can be attributed to the music itself, which was convincingly faked by Teller, who spent months practicing the art of looking like a jazz drummer. Teller actually has 12 years of drumming experience, but no amount of training can turn you into a first-rate drummer in a matter of months. Still, the music we hear (with original pieces composed and conducted by Tim Simonec) does wonders to the film’s increasingly electrifying drama. Like the film itself, the music has a way of reaching incredible heights and then stopping on a dime, leaving your heart pumping as if for no apparent reason. “Whiplash” is a defibrillator jolt to the chest. It’s a total rush.