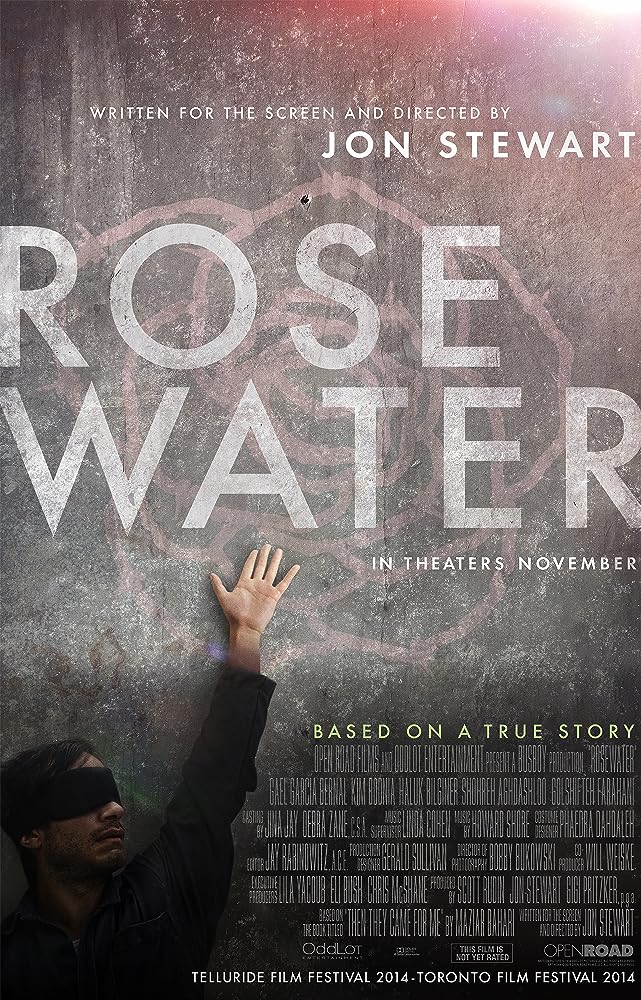 “Rosewater” stands at the crossroad of entertaining and important, a distinguished place that not many films each year get to stand at. It recounts the true story of Iranian-born, London-based Newsweek journalist Maziar Bahari (Gael Garcia Bernal), who was taken captive in his home country on counts of espionage for covering the 2009 election that led to the Tehran Square revolution. “Rosewater” is also the passion project of Jon Stewart, the host of the satirical nightly program “The Daily Show.” But why would a popular comedian pick a dramatic story like this for his screenwriting and directing debut, you ask? Shortly before the election, Bahari appeared on Stewart’s show – sadly, Iranian officials used his appearance as fuel for their claims of Western-sympathizing and espionage. Stewart, feeling partially to blame for Bahari’s captivity and torture, set out to share his story on the big screen. “Rosewater” is that honorable effort.

Thanks to Stewart, there’s no stuffy true-life-story script here. That’s what we’ve grown to expect from these films – dry, straight-forward scripts that move the interesting true story ahead. Jon Stewart doesn’t settle for just interesting. Instead, “Rosewater” blends archival footage of the revolution with realistic recreations for maximum dramatic effect. It has true-story thrills to spare. Plus, Stewart uses his satiric wit to liven up the screenplay with personable dialogue and even a decent amount of humor. You’ll find yourself laughing at some of the dark film’s lighter moments. And Gael Garcia Bernal, the Mexican-born star of several foreign films (but you might recognize “Babel” and “Casa de mi Padre”), gives Stewart’s script a personality like we’re not used to. Bernal is a lovable character we can’t help but feel sorry for. And Kim Bodnia, the Dutch actor who plays Bahari’s interrogator, is a surprising success. If he’s a method actor, pulling from his real-life to draw out these emotions, he must have a lot of issues. He’s incredible. At times, though, especially in the film’s second half, “Rosewater” can seem sluggish. Solitary confinement is almost as boring for us as it is for Bahari. Despite the odds, Bernal keeps the film going. He makes us want to know what happens to his character in the end. But he and Stewart know that the focus needs to remain on the people, on the revolution, of which Bahari is just one representative. And so it does. “Rosewater” is the movie of the moment, a powerhouse film as moving and important as it is entertaining and well-made. It’s a must-see.