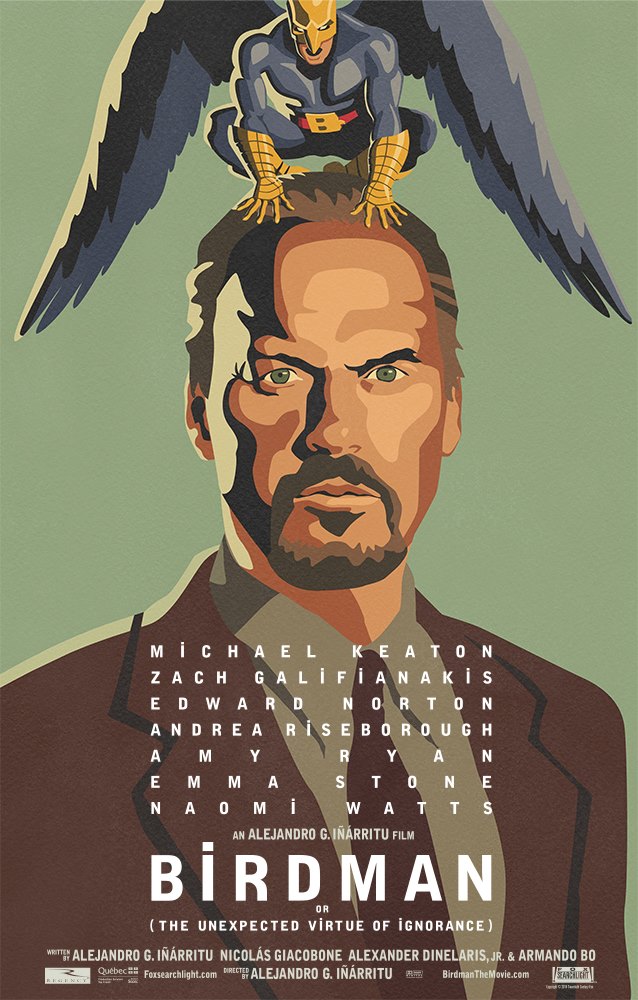 “A thing is a thing, not what is said of that thing.” That quote can be seen in the dressing room of Riggan Thompson (Michael Keaton), the has-been star of the Birdman movies of the early 90s. The quote is an attempt to make whatever I say here completely irrelevant, and it drives home the entire point of director Alejandro G. Inarritu’s film “Birdman.” At the heart of it, art should serve a purpose beyond fame, money, or going viral on YouTube. As Riggan struggles to adapt a Raymond Carver work for Broadway, a deep voice bellows in his head trying to convince him to go back to his days of fame and glory (and billions of dollars) as Birdman. “Birdman 4” would surely be an international sensation, but Riggan wants more than that now. He wants his work to last. But as he’s being tugged in all directions by his own desires, as well as those of his agent (Zach Galifianakis), his daughter (Emma Stone), his castmates (Andrea Riseborough, Naomi Watts, and Edward Norton), and his ex-wife (Amy Ryan), Riggan fears all of his hard work could crumble, leaving him as culturally irrelevant as he was before.

If the real-life correlation between Riggan Thompson and Michael Keaton isn’t obvious to you yet (Keaton starred as a caped superhero in two Tim Burton-directed “Batman” movies, in 1989 and 1992), it should be. After years of taking supporting roles in forgettable action movies like the “RoboCop” remake and “Need for Speed,” Keaton couldn’t afford to screw it up this time. Thankfully, “Birdman” trumpets Keaton’s triumphant return to relevance. Keaton stares cultural irrelevance in the face, and irrelevance stands down. Keaton could very well be looking at his first Oscar nomination. If the Oscars were tomorrow, I would say he was looking at a win (but we still have half a dozen more weekends of good movies left this year). You feel the truth in Keaton’s voice as he emotes to his daughter about needing to feel important again. As a child of the late 90s, I didn’t know Keaton was capable of such a high caliber of acting. “Birdman” makes Michael Keaton a hot commodity again. But Keaton is far from the only star worthy of attention. If you would have asked me last year, I would have called Edward Norton culturally irrelevant and worthy of a “Birdman”-esque movie to mock his illustrious career in 90s movies like “American History X” and “Fight Club.” But now, after two commendable performances in Wes Anderson movies and one – dare I say – career-topping performance in “Birdman,” Edward Norton might be back to stay, too. And I will say, as a fan of “The Illusionist,” “The Incredible Hulk,” and even “Stone,” I am excited to see what the future holds for Norton. But I’ll keep going! Since “The Help” back in August 2011, Emma Stone has settled for lower-brow roles in “The Amazing Spiderman” and “Gangster Squad.” But now, as Riggan’s daughter Sam, Stone takes on something a little more ambitious again. Sam is a former addict just out of rehab, now helping her father with his first theater production. But Riggan was never really around, instead settling for fame and popularity amongst the populous…but not necessarily with his family. Stone digs deep and gives a visceral performance you feel when you watch.

It took a four-man team to write “Birdman,” three of whom teamed up to write Inarritu’s 2010 Spanish-language Oscar nominee “Biutiful.” Sporadic drum beats, like those you might hear at a Greenwich Village poetry reading, serves as much of the film’s background music. It’s only fitting, since the script is pure poetry. Wonderfully telling a compelling narrative while making a point about the beauty of artistic intention, “Birdman” offers the best of both worlds.

But the one facet of this very multi-faceted success that I can guarantee garners award consideration is not acting, directing, or writing. It’s the unmatched perfection of Oscar-winner Emmanuel Lubezki’s cinematography. Lubezki fluidly follows the actors and actresses throughout the Broadway theater, where a majority of the movie is set. Instead of cutting from room to room, “Birdman” opts to follow Riggan and the other characters through the halls, past extras playing stagehands. Sometimes, the camera will transcend time and space and walk down the hallway to run into a character hours later, though we just saw him or her on screen a few seconds ago and the screen never went dark. And occasionally, the camera will catch up with multiple characters in multiple areas of the stage without ever cutting scenes. Why take a shortcut to the destination when so much of the fun is in the journey itself?

It’s a treat to see so many things go so very right in “Birdman.” You don’t just owe it to yourself to see it. You owe it to Michael Keaton.