On October 16, film director Terry Zwigoff visited the Ohio State University’s Wexner Center for the Arts to give a retrospective on his nearly 30-year career in directing. Besides the films I’ve seen and reviewed here, Zwigoff has also directed two lesser-known biographical documentaries; “Louie Bluie” in 1985 and “Crumb” in 1994. The Academy Award-nominated writer and director talked about the creation of each of his films and his inspirations. He praised Sony Pictures Classics (a bit I definitely couldn’t pass up, since I’m a huge fan of theirs) for being the only studio that respected “Crumb” enough to let it run at its full two hours. He divulged to the crowd that during audience test screenings of “Crumb,” he wrote his own forged audience feedback cards to trick his producer into letting him keep the film as it was (though audiences generally were not fans). At times, Zwigoff took the mystique out of his films, telling how in his two documentaries he labored to stage scenes so that they would look natural. And lastly, he was a bigger cynic than I’m being now. But overall, he was entertaining, informative, and personable. Plus, when I asked him why he hasn’t directed a movie in eight years (the first audience question of the night), he said I had a good question. So now I have to be a fan. But let’s let his movies speak for themselves.

In a world that stifles creativity and encourages sameness, can one hipster Lone Ranger (a Juno-type character before Ellen Page perfected it) break the mold? Can creativity win out? That’s the question asked in Zwigoff’s odd-ball 2001 film “Ghost World.”

Thora Birch and Scarlett Johansson (in her breakout role, at 15) play Enid and Rebecca, two girls who, upon graduating high school, begin looking for an apartment to share. In the meantime, they think it’d be rad to prank a seemingly creepy man who posted a personal ad in the newspaper reaching out to a woman he met at a party. It turns out, however, that Enid kind of likes the man, Seymour (Steve Buscemi), and his taste for old jazz and intelligent conversation. But it’s, like, major creepy to Rebecca, who simply wants to continue working and begin renting a nice apartment in the suburbs.

The Oscar-nominated script (by Zwigoff and Daniel Clowes, whose comic book the film is based on) is inconsistently funny and oftentimes slow. It held my attention okay, but in the end it was a bit of a let-down. Like “Juno,” the comedy is sarcastic and irreverent, but in a subtle way that won’t make your laughs audible. To the bigger point, Zwigoff said the story held a message about being present in a world where everyone is lost in their technology. To be honest, I was checking my phone too often to notice.

If you’re like me, “Ghost World” won’t be the most satisfying way to spend nearly two hours. It’s a smart story about individuality, but it takes a roundabout way of getting to the point.

On the contrary, Zwigoff’s “Art School Confidential” (his other collaboration with the cartoonist Clowes) is like an art school film gone very, very right. It insightfully and hilariously covers the art school experience (and, really, college in general) from the point of view of a boy that just wants his art to make him professionally and socially successful.

When Jerome (Max Minghella, “The Social Network”) left home for art school, he hoped that he could become the next Pablo Picasso. Instead, his art professor (John Malkovich, in what Zwigoff says is the best role of his career) and his classmates (including Joel David Moore and Scoot McNairy) make his technically well-made masterpieces a laughing stock. Instead, they favor a newcomer’s (Matt Keeslar) minimalist works. To make matters worse, Jerome’s art model love interest Audrey (Sophia Myles) likes the newcomer better too. “Art School Confidential” chronicles the struggles Jerome and his classmates face just to survive the hell they attend. 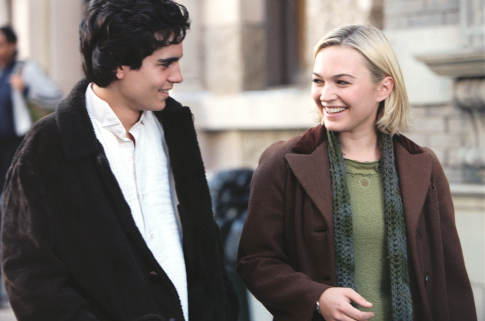 Clowes’s script asks “What is art?” and gives the only true, sardonic answer anyone can give. A screenplay riddled with intentional clichés finally makes you forget them, as it turns them into something much more genuine and realistic. I think that was the point. It really is like a best-case-scenario art school final project. That’s a true compliment. Sometimes its comedy is creepy and sexually deviant, but it’s off-the-wall, bold humor you don’t hear very often. It gets away with it.

Minghella, in his first leading role, has a breakout performance as Jerome. He’s confident in his ability to act, and it translates. The audience sees him going beyond the usual teenage performance. And Malkovich really is in classic form, a true stimulus for a film’s humor if I ever saw one.

“Art School Confidential” is a real surprise, an unexpectedly entertaining and compelling comedy. Is it art? Watch and learn.

Willie (Thornton) and Marcus (Cox) travel from city to city and department store to department store to take jobs as a cheap mall Santa and elf duo. Why do they work so cheaply? Because before they leave they rob the place blind. That is, until they meet their match in Phoenix in the form of store security officer Gin (Bernie Mac), manager Bob (John Ritter in his last live-action role), and a young boy (Brett Kelly, who Zwigoff championed for the role though he isn’t an actor) who warms the heart of grinchy Willie.

Being Zwigoff’s most popular film isn’t much of an accomplishment for “Bad Santa,” considering its initial Hollywood appeal (at least compared to his other films). But “Bad Santa” is also full of huge turn-offs, the most obvious of which is its excessive use of vulgarity, rudeness, and overacting. Billy Bob Thornton, generally in control of his emotions (see the “Fargo” TV series), can’t help but shout his way through every angry line. But he’s not angry at people or events, he’s angry at the world. And Tony Cox is even worse, fitting a “Jesus Christ” or a “God damn” into every other line. Not that I’m against vulgarity: if it’s done well, it can add to the realism and the emotion of a line. But here, it just seems like another excuse to be blasphemous. Willie has every vice a man can have. He’s a walking, breathing, drinking, sexing cliché. You find yourself saying “Well, that escalated quickly” often. But, in Thornton’s defense, he tried. Zwigoff said that in several scenes, Thornton actually got drunk to give his character’s alcoholism a splash of realness. “He was a better actor sober,” Zwigoff admitted, though.

Even if the ending tries to redeem the film’s first hour and ten minutes, it doesn’t quite make up for it.