In 2007, writer/director Paul Thomas Anderson (“The Master“) carefully crafted a 25-year saga following an oil tycoon and the trials and tribulations he faced on the road to questionable success. The film received eight Academy Award nominations and two wins, for Best Actor (Daniel Day-Lewis) and Best Cinematography (Robert Elswit). What it hasn’t yet received is proper praise from me. Until now.

Daniel Plainview (Day-Lewis) discovers a knack for oil prospecting while a geological surveyor in the American West. Along with his adopted son HW (Dillon Freasier), Plainview finds a significant sea of oil under the land of Abel Sunday (David Willis) and his family, including his outspoken son and local preacher Eli (Paul Dano). At the cross-section of greed, religion, and money, Daniel Plainview and Eli Sunday lock horns and struggle to meet their particular wants and needs.

Daniel Day-Lewis is the greatest actor alive today. In “There Will Be Blood,” he teaches a master class in acting. No matter how many roles I’ve seen him in, I never see him as Daniel Day-Lewis. You can’t say that about any other actor with his level of popularity. Aside from his incredible acting expertise, Day-Lewis’s personal privacy allows him to be seen in a unique light in every new role. He has full command of his character for every second, and it’s the little things he does right to make Daniel Plainview a well-rounded and complete character. To Day-Lewis, even the small-talk has big effect. He’s as close to perfect as one will find. But Paul Dano is nearly his equal. Dano is perhaps today’s most underrated actor, a consistent acting talent without theAcademy Award nominations to go with it. Like Day-Lewis, Dano’s versatile acting range and isolation from media outlets allow him to hide behind the characters he’s performing as. What’s better than both actors? Any scene in which Day-Lewis and Dano face off. It’ll blow you away. 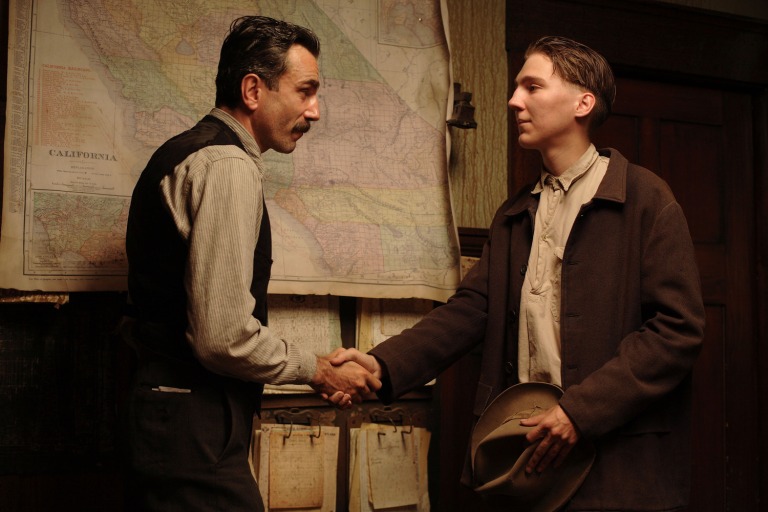 In “There Will Be Blood,” Paul Thomas Anderson’s script says just as much with actions as it does with words. You don’t hear the first line of dialogue until 15 minutes into the film. You appreciate it. Anderson’s dialogue accurately reflects the lexicon of the turn-of-the-century American West, but doesn’t lose viewers in mind-numbing Old English. Plainview spits distinguished insults backhandedly, drawing laughs and responses of “Oh, burn!” while Eli Sunday just looks on, dumbfounded. It’s as entertaining as it is respectable, a rare feat accomplished.

You won’t see many movies quite like it. There’s not much wrong with it. Technically, it’s just about perfect.