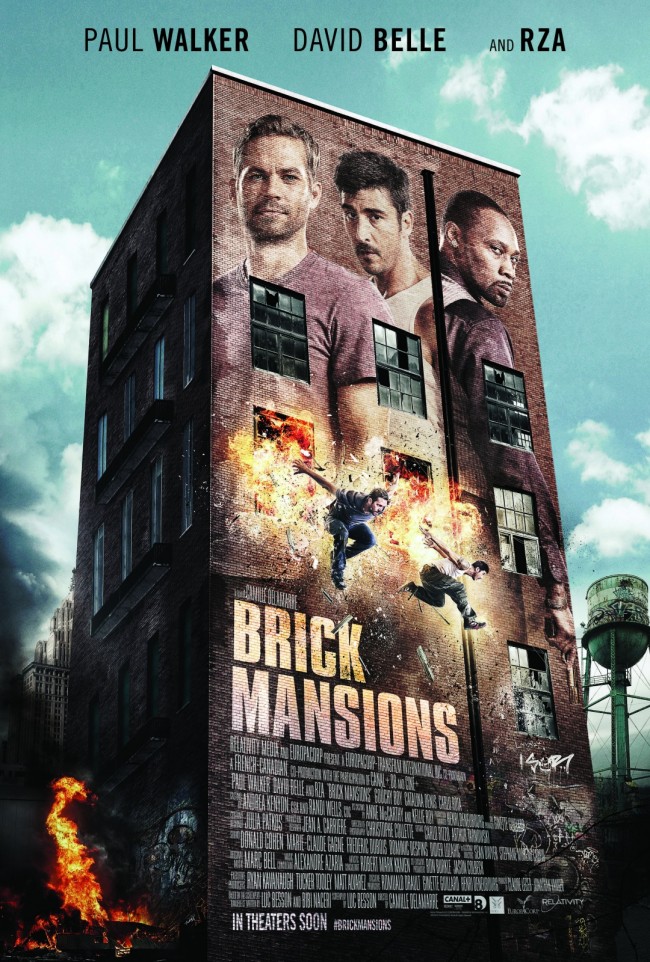 True, it has an uninspired script. True, not a single actor gives anything beyond a run-of-the-mill performance. True, it’s basically “The Parkour Movie.” But despite these odds (and the fact that it’s a  worse remake of a so-so French action movie, “District B13”), “Brick Mansions” made me believe in the excitement of real-life stunts again.

In the hardest-core display of parkour I have ever seen, David Belle (one of the two inventors of the training discipline) plays Lino, a strapped-for-cash drug thief in the urban jungle of Detroit. More specifically, Lino lives in a walled-up community of Detroit known as Brick Mansions. In the future, you see, Detroit (even more overrun by violence and corruption) puts a wall around the most crime-ridden part of the city and pulls its police force, schools, and hospitals. Lino is being chased by the self-proclaimed Mayor of Brick Mansions, the powerful drug kingpin Tremaine Alexander (RZA), after he takes some of Alexander’s loot and doesn’t pay up. So Alexander kidnaps Lino’s girlfriend (Catalina Denis). But Alexander also has his hands on an even more precious treasure, a ticking neutron bomb big enough to wipe out the entire Brick Mansions community. Respected Detroit cop Damien Collier (Paul Walker, in the last film he was able to complete) is sent in undercover to defuse the bomb, but also sets out to kill Alexander once he’s inside (since Alexander killed his policeman father). As Collier partners with Lino to get on the inside and reach their common goal, they’ll face their share of obstacles. Nothing that can’t be overcome by parkour!

Essentially, “Brick Mansions” is a gimmick movie. See the inventor of parkour in his first major role in an American-released movie (the film’s actually Canadian). See Paul Walker, American action icon, in his last major role in a movie. It’s a simple idea, but sometimes it’s that easy. Action rarely gets more dizzying, nor stunts more flashy, than in “Brick Mansions.” You get guns, fists, car chases, and attractive people (both girls and guys). You want well-choreographed fight scenes? You got it. It goes 90 minutes, non-stop. Belle (and Walker, too, doing most of his own stunts) leap from buildings, scale walls, and hop cars as they show off their gravity-defying parkour. Sure, Belle uses his abilities for even the most pedestrian of tasks (getting into a van, for instance), but when it comes to stunts this epic there’s no overdoing it. I feel like I pose this question every time an entertaining action movie is released…Can an audience forgive cheesy dialogue and lousy acting in their action movie? I can, if the action is exciting enough. In “Brick Mansions,” it is.

“Brick Mansions” is the epitome of a guilty pleasure movie. I’ll probably buy it on Blu-ray—I had that much fun watching it. It’s so cheesy. It’s so predictable. But one thing you won’t expect is how much you’ll enjoy yourself.