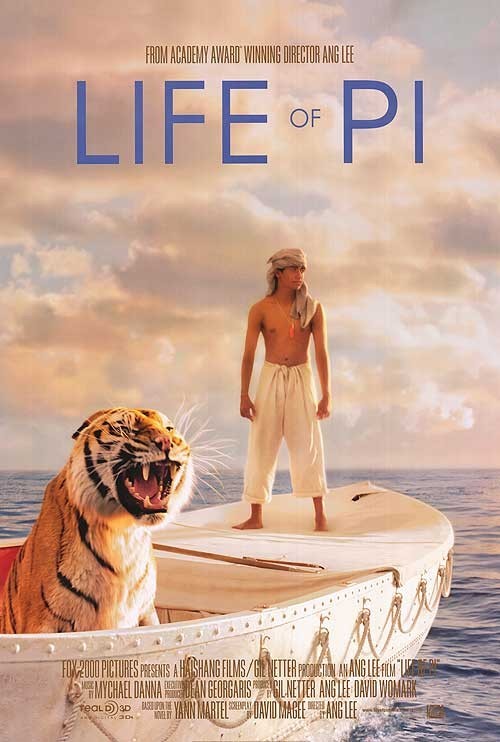 I hate myself for waiting so long to see director Ang Lee’s visual marvel “Life of Pi.” I convinced myself that the Yann Martel novel was not a story to adapt into film – it’s just about a boy stuck on a boat with a tiger, after all…right? I was completely wrong. It’s about so much more.

Irrfan Khan plays Pi, a middle-aged Indian man living in Canada with a wife, two kids, and an incredible story. When a writer (Rafe Spall) hears about Pi’s story, he comes to his door to hear it for himself with the hopes of turning it into a book. What follows is a dramatic retelling of, you guessed it, the life of Pi, starting from his childhood but focusing mainly on a terrible accident at sea, which leaves him (for most of the movie, played by Suraj Sharma) alone on a lifeboat with an angry, hungry Bengal tiger.

“Life of Pi” is about as visually striking as any movie I have ever seen (“Gravity” might have it, though). Animals (including the tiger) crafted entirely with CGI ushered in a new era of visual effects. It makes me believe in an entirely new form of storytelling. If a movie ever fills you with so much wonder, I’d be surprised. It’s magical. But more than the visual effects, “Life of Pi” has an incredible story (with its Oscar-nominated screenplay) and an ending that hits you like a ton of bricks.

The tiger (crafted from CGI over 80% of the time, according to the film’s visual effects supervisor) strikes terror in your hearts, even when you know he isn’t real. And actor Suraj Sharma, even when he’s screaming and cowering at nothing at all, sells us on the tiger’s concreteness. For a character with very little dialogue (monologue at the digital tiger and narration from older Pi make up most of the words you hear), Sharma is incredible. He deserved far more credit for making “Life of Pi” work than he did.

By looking simply at the trailer, it’s easy to underestimate how awesome and unforgettable “Life of Pi” actually is. Don’t make the same mistake I did.

In 2013, it shared Oscar nominations with “Life of Pi” for Best Cinematography, Production Design, and Original Score, but “Anna Karenina” only walked away with Best Costume Design. Still, this romance epic based on the Leo Tolstoy novel went largely unappreciated among moviegoers. It’s a niche art film, using the set design of a theater production while blending in beautiful, aesthetic cinematic elements to make a historical drama unlike any you’ve ever seen before.

When Anna Karenina (Kiera Knightley) travels to visit her sister, she meets Count Vronsky (Aaron Taylor-Johnson), and the two immediately have a connection. But her big-shot husband, Karenin (Jude Law), would face crucifying embarrassment if people found out. And Anna would lose the right to see her son if she left Karenin. Stuck between loving the man she loves and staying in a relationship she may need but doesn’t want, Anna is left without hope.

Period romances can be so stale, don’t you think? Not this time. This sultry, passionate love story is enough to steam up the windows. This isn’t your mother’s romantic literary adaptation. From the very beginning, Knightley and Taylor-Johnson spread the sexual tension thick, so it takes a long while to soak all the way in. They have you so convinced, you’ll find yourself rooting for the adultery. It’s a well-adapted screenplay, brimming with intense drama so emotionally charged it’s hard to stop watching. I’ll admit, it does drag on for 15 or 20 minutes too long, but it’s a historical drama that doesn’t. In its grand set design, I found the theatrical acting and dolled-up characters nearly comical. But by using music and dance to elegantly express the built-up sexual tension, it crisply conveys all that it needs to without using throwaway dialogue.

“Anna Karenina” isn’t your average period romance. It takes a classic love story and turns it into a sensual dance of mystery and excitement.