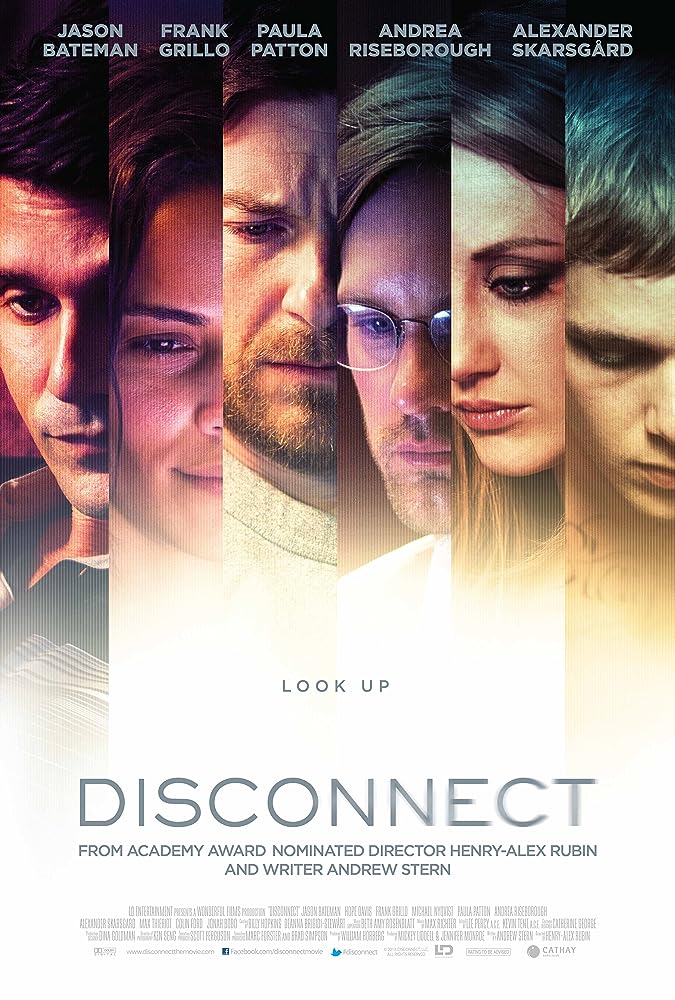 A couple’s already rocky marriage hits its low-point when their credit card information is stolen. Could it be from the oversharing habits of the wife, Cindy (Paula Patton), who frequents chat rooms, or the husband, Derek (Alexander Skarsgard), addicted to online gambling? They hire a private detective, Mike (Frank Grillo), to investigate, but he’s taking too long and the military man in Derek feels the need totake matters into his own hands. Meanwhile, Mike’s son (Colin Ford) and his buddy are cyber-bullying a classmate, Ben (Jonah Bobo), by posing as a flirtatious girl. Too bad Ben’s father (Jason Bateman) is too preoccupied being a lawyer to be an attentive parent. He’s currently representing a news station, and in particular a reporter (Andrea Riseborough) who has been investigating a ring of online escorts who sell private chats for money and airline miles. But when she gets too close to one escort (Max Thieriot) to be objective, she lets her heart get in the way of the law. In one hell of an ending, these stories come to their climactic (but not all tragic) conclusions. At its heart, “Disconnect” is a message picture about the dangers of tech-addiction and the wall of privacy that’s torn down whenever you log in. Sounds preachy, right? Wrong. Because “Disconnect” also doubles as one of 2013’s most intense and unnerving dramas.

In the most serious role I’ve ever seen him in, Jason Bateman is superb. He reaches new emotional depths as he conquers the gravitas needed to play the “disconnected” father of a cyber-bullied teen. It’s by no stretch of the imagination an easy role to pull off, but Bateman handles it perfectly. Max Thieriot – best known nowadays for his role on “Bates Motel” – gives Kyle, an online stripper involved in an underground sex trafficking ring, vulnerabilities and conflicting emotions. Kyle’s position is no easier to handle than anyone else’s, and Thieriot gives us mixed-signals. Alexander Skarsgard and Paula Patton are incredible. The portrayal of their troubled marriage is heartbreaking because you buy into it so effortlessly.

“Disconnect” finds your rawest nerve, whatever your age or situation, and wages an all-out attack on your emotional well-being. Call it fear mongering if you want, but “Disconnect” will get to you. It’s deep like that. Not fake, but legitimately upsetting to watch. These aren’t real people…but they are. They may not have the same name or look like Hollywood actors and actresses, but they’re out there. And they sit behind computers, like the one I’m on right now – the one on which I ordered “Disconnect” from Netflix – and you would never know it. But “Disconnect” lifts the veil on these wizards of Oz trying to wield power they don’t have. You probably have some awareness of the dangers of online crime, but “Disconnect” puts brilliant actors in the roles of the real people out there getting played every day – it’s what you needed to see to understand just how tragic these situations can really be.

A cross-section of interconnected tech-reliant Americans, “Disconnect” is as powerful and moving as it is important. You might not want to hear what it has to say; that’s all the more reason to listen. But even if you agree, or stubbornly disagree, “Disconnect” is a fine specimen in drama, mystery, and intrigue. Even if you watch it just for that, I’m confident you’ll be blown away.

4 thoughts on “‘Disconnect’ is a master class in dramatic acting”