Based on the unbelievable true story of Richard Phillips, a commercial ship captain whose Maersk Alabama was taken over by Somali pirates on a 2009 trip around the horn of Africa, “Captain Philips” rightly tells the story that deserves to be told. It’s a long and harrowing tale of bravery and survival, but director Paul Greengrass uses a lot of real-time filming to let the tension build naturally, without the Hollywood effects. “24” taught us that action in real-time has the potential to be much more suspenseful. Don’t expect the film’s pulsing score to build the tension for you. It doesn’t need to. By the end of the 20-minute, real-time scene in which Phillips (Tom Hanks, superb) looks on helplessly as armed pirates board his ship with a metal hook ladder, the tension is already butter-thick. That’s how Greengrass likes it. Of the nine Best Picture nominees for 2014, “Captain Phillips” has the third-highest domestic gross. But its commercial success doesn’t buy into the Hollywood style. 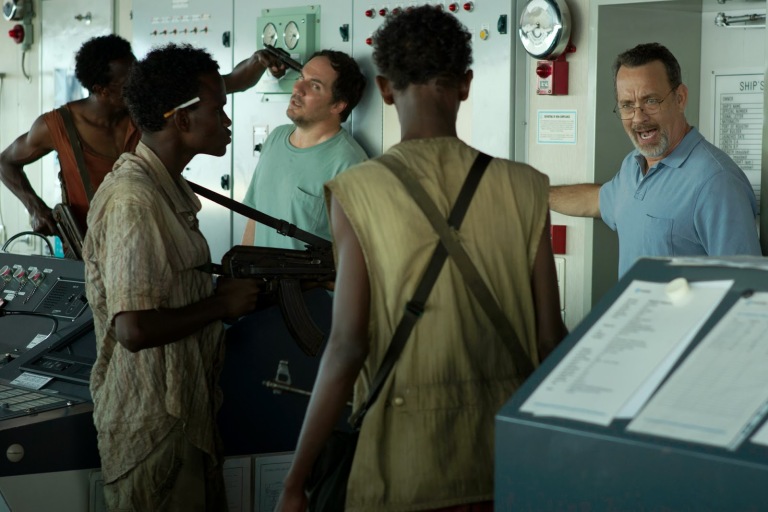 Case in point: Barkhad Abdi, nominated for the Oscar for Best Supporting Actor, just a year ago was working as a cab driver in Minnesota. As the Somali pirate captain, Muse, Abdi is incredible. His strong personality necessarily clashes with his own crew and the crew of the Alabama. The remaining three pirates of his crew, all first-time Somali actors, have talent far beyond what their résumés suggest. Ten months ago, I wrote a blog post predicting an Oscar for Tom Hanks in 2014. While I didn’t have the guts to choose whether it would be for “Captain Phillips” or “Saving Mr. Banks,” which at that time were both pre-trailer plot synopses with rumored casts, I did feel confident in my forecast. Then Oscar gave us all a big, gold middle finger on nominations day when he snubbed Hanks of the chance. Either way, Hanks shows why he’s a living legend. His outstanding emotional range and depth have rarely been tapped into like they are in “Captain Phillips.” Phillips was a pretty average ship captain, and Hanks gives us average. Hanks’ blue polo and khakis is the outfit of his normalcy. But when the stakes get high, Hanks performs beyond the call of duty.

Greengrass’s piece of cinematic realism is chaotic and disorderly, just like the situations he’s trying to recreate. Somali pirates and Phillips’s crew shout over each other out of fear and confusion. He can’t hear what they’re saying because neither can they. We’re brought into the story. When Phillips’s story ceases to be action-packed and exciting, so does the film. That’s how it should be. Why sugarcoat something when it’s better bitter? The short stretches of action-less dialogue make the film’s truly climactic moments all the more incredible. The killer ending is better than most I saw in 2013 (behind only movies like “12 Years a Slave” and “Prisoners”). At 2 hours and 15 minutes, “Captain Phillips” might drag a little right before the final scenes, but Greengrass stays committed to telling the story the way it played out in real life.

Brimming with natural suspense, the compelling story of “Captain Phillips” is an unbelievable story told with unprecedented believability. Its adapted screenplay just won the highest honor it could by the Writers Guild of America (too bad they gave this travesty its award for Best Original Screenplay). It’s one of the best films of 2013. Bravo!

2 thoughts on “‘Captain Phillips’: Director Greengrass tells the story the way it deserves to be told”