It’s a bird, it’s a plane, it’s…an overused cliché that shouldn’t be the first line to anyone’s “Man of Steel” review. Oh well. Zack Snyder’s new Superman reboot follows the already wide-open path made by some recent superhero movies, where big explosions are sometimes replaced by serious drama. The Dark Knight trilogy set the tone – dark, psychological, not devoid of action but not reliant on it. Snyder follows suit. It pays off big time.

Snyder saw it fit to track Superman (Henry Cavill) from his humble origins as a baby on the planet Krypton through his troubled school years in Kansas to his adulthood fighting for the safety of Metropolis. Russell Crowe shines as Jor-El, Superman’s biological father, only to be outcooled by Kevin Costner as his adoptive father. The Father of the Year award is going to be a toss-up this year. But not everything is Americana happiness for the Man of Steel. He wants to find his true extraterrestrial identity. And his purpose. With the help of journalist Lois Lane (Amy Adams), he does. But as he fights to discover his roots in Krypton, General Zod (Michael Shannon) searches for Superman on Earth. You see, Zod and Jor-El didn’t end their relationship on the best of terms, and Zod needs to kill Superman in order to extract his blood and recreate Krypton on Earth. He has a pretty unhealthy obsession with bringing his home planet back from the dead. Heavy sci-fi stuff. 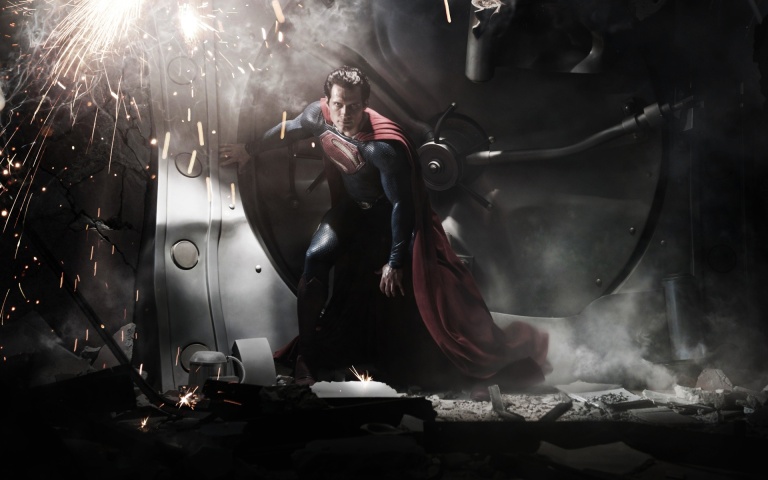 Henry Cavill does good as…no, Henry Cavill does well. Superman does good. Anyway, audiences aren’t used to seeing fantastic superheroes in recent years. Christian Bale didn’t ruin the Dark Knight trilogy, but he couldn’t hold a hat to his villains. Chris Hemsworth and Chris Evans are mediocre as Thor and Captain America. And in 2006 Brandon Routh made a laughing stock of Clark Kent in “Superman Returns.” But guys, we found a keeper. Cavill has the charm, he has the abs, he has the humor and the gravitas needed to pull off a superhero role. Bravo! Amy Adams wasn’t so memorable, but like the love interest in so many superhero movies, her role isn’t the most important (even when the superhero gender roles are reversed). If I’m going to glorify anybody for their role, it’s going to be one of the supporting men. If Kevin Costner is the coolest man on Earth (and I’d argue that he is), Russell Crowe is the coolest man on Krypton. Everyone’s favorite deadpan Christopher Meloni basically plays Elliot Stabler as an Army colonel. And by that I mean he’s awesome. And bask in the hypnotic villainy of Michael Shannon as General Zod. This man knows how to play a villain. His voice demands obedience, his demeanor shows no mercy, yet somehow he makes you adore him as you would a hero. He’s out-of-this-world good. They’re all awesome. “Man of Steel” drowns in the cool of its male leads.  Somehow when it comes to this movie, my vocabulary dwindles down to “cool” and “awesome.” Guys, this is your movie, and I’m certain you’ll have the same typical masculine reaction.

“Explosive” doesn’t begin to describe the heat this movie packs. Awesome fight scenes – including Russell Crowe and Michael Shannon trading punches on Krypton and Superman throwing down with, well, everyone – look fantastic with the help of some nearly flawless CGI effects. “Man of Steel” is the crossroad between the exciting action of “The Avengers” and the noir-ish drama of “The Dark Knight.” It strikes a rare balance that any fan of superhero movies should be thankful for.

So stop wondering how the Man of Steel shaves or where his red underwear went and just and enjoy the Zod-damn movie. It’s one of the best of the year!