I’m a Bing man myself, but nobody can resist the fascinating and entertaining world of Google presented on the big screen in “The Internship.” Vince Vaughn and Owen Wilson reunite eight years after they crashed into our hearts in “Wedding Crashers,” and while no one is claiming they lived up to their lofty expectations, their comedic chemistry on screen is undeniable.

Former sales rep Billy McMahon (Vaughn) comes to the exciting (albeit decade-old) realization that old dogs like him and his buddy Nick Campbell (Wilson) need to start looking for jobs in the digital sector if they want to make good money. So Billy gets them the chance to beat out hundreds of college-educated twenty-somethings to become interns at Google, reputed to be the best place in America to work (and you’ll see why, with the unlimited free snacks, Segways and other innovative modes of transport, “nap pods,” and spiral slides alongside the stairs and escalators). But these “mental hunger games” for a handful of intern spots will prove much more difficult than these two tech-deficient old men ever imagined.

Papa bears Vaughn and Wilson are playing at about 60 percent in this one. It’s not their best outing, but it’s still great to see them together again on the big screen. Philosopher Vaughn offers his fair share of age-revealing anecdotes and little nuggets of inspiration. He’s the big brother we all wish we had. Wilson is somewhat less lovable, as his pursuit of a full-time Google employee (played by Rose Byrne) takes away from his mentorship of the young’ins. But together, the pair still incites laughs. Can you go wrong with these two? Even funnier than either of them is a cameo by a big name comedy star. He steals the show for a hilarious five minutes, but since his uncredited appearance isn’t mentioned in any trailers and his scene is funniest if you don’t see it coming, I’ll keep his identity a secret. 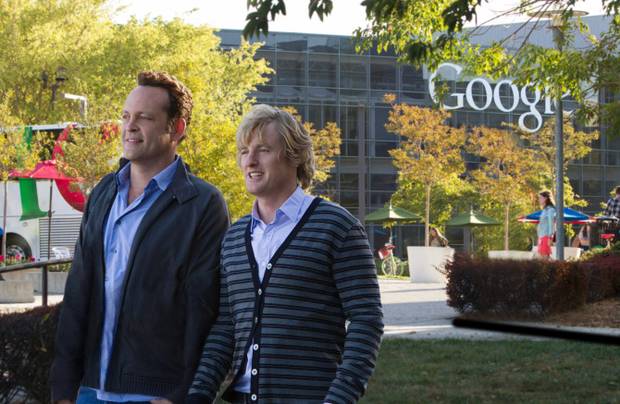 “The Internship” is the feel-good comedy of the summer, full of inspiration and wit and age-old adages for making it in today’s world (alright, and yesterday’s world). Seeing brainy Harvard grads compete for programming jobs at Google sure made this 21-year-old, liberal artsy English major feel like a real noob, but “The Internship” dropped some truth bombs about what it’s like for college grads today. This isn’t your father’s job search, where you used to be able to scan through the newspaper and take your pick. Now we hardly have any newspapers left to scan. Owen Wilson asks us “What happens to a dream deferred?” and “The Internship” gives us the answer. Sure, Vaughn’s script might be a little late to the game. It might reference Harry Potter and the X-Men like it’s still 2006. But in the end, “The Internship” offers some valuable advice for all the underdogs out there. And really, who doesn’t love a good underdog story?

3 thoughts on “‘The Internship’: Required viewing for Class of ’13?”