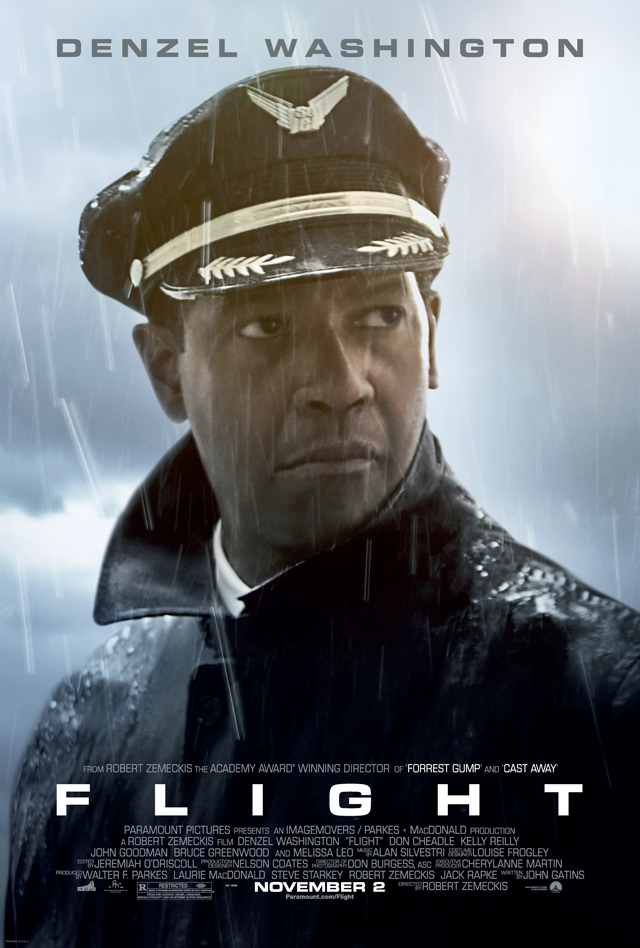 Get ready to lift off with “Flight,” the turbulent drama from director Robert Zemeckis (“Forrest Gump”). When Whip Whitaker (an Oscar-nominated role for Denzel Washington), an aviator extraordinaire, safely lands his free-falling jet, nobody really doubts his heroics. 6 people died, but over a hundred live because of his stunt. When we discover that the pilot was both drunk on mini-vodkas and high on cocaine when he performed his mid-flight aerobatics, though, we start to wonder whether or not he should be arrested or awarded a medal of honor. Zemeckis and screenwriter John Gatins (“Real Steel”) raise the stakes about 30,000 feet with this big question of ethics, and they make us wonder whether to love or hate Whitaker for what he did (and what he does). Is this Denzel’s best movie since “Training Day”? Is it Zemeckis’s best since “Forrest Gump”? In my opinion, absolutely.

First, the speed round of notable achievements: The 60’s rock soundtrack reminds me of “Forrest Gump.” It’s perfectly fit for Whip’s personality. Cinematographer Don Burgess (Oscar-nominated for “Forrest Gump”) finds beauty in tragedy. His shots, especially some of those inside the cockpit, heighten tension that’s already butter-thick. Zemeckis and Gatins introduce a couple minor characters with some major impact. It takes skill to make a character that’s only shown for five quick minutes so memorable. Like “Silence of the Lambs,” “Flight” knows how to use silence and simple background noise to create unrivaled suspense and drama. You don’t always need talking heads filling empty space. Let it run on empty, it’s better for it. “Flight” knows how to use SFX without rubbing it in your face. They could have made the whole movie full of SFX, but they didn’t need to. Because they had a story, they had emotion, and they had Denzel. You don’t need SFX after all that.

Gatins knows how to tell a story. The title of the movie not only refers to Whip’s profession but his tendency to fly from the truth. Should we feel sorry for him? Can we? Gatins catches us scratching our heads, but he doesn’t sacrifice a fantastic story in the process – as so many “thinker movies” have done in the past. This is just a fresh, classic drama. He expertly mingles two great stories, of Whipand a drug-addicted woman he meets in the hospital. This is a story that’s meant to be seen.

Thanks to Denzel, it’s a story that’s meant to be seen over and over again. He’s the real emotional pillar to this towering drama. He shows audiences why he was such a commodity a decade ago before he got into action/adventures like “Unstoppable” and “Safe House.” It got him his sixth Oscar nomination and his seventh Golden Globe nomination. But hey, nobody was beating Daniel Day-Lewis. By his side, John Goodman and Don Cheadle are their brilliant selves too.

I hate to say it, but “Flight” is one of those movies that’s difficult to describe. It effectively uses all of the traditional tools for building a great drama. It has a riveting performance by one of the best actors of our time. Everything from the soundtrack to the cinematography is memorable, even a week after seeing it. It’s a great, great movie. I guess I just can’t say enough about it.