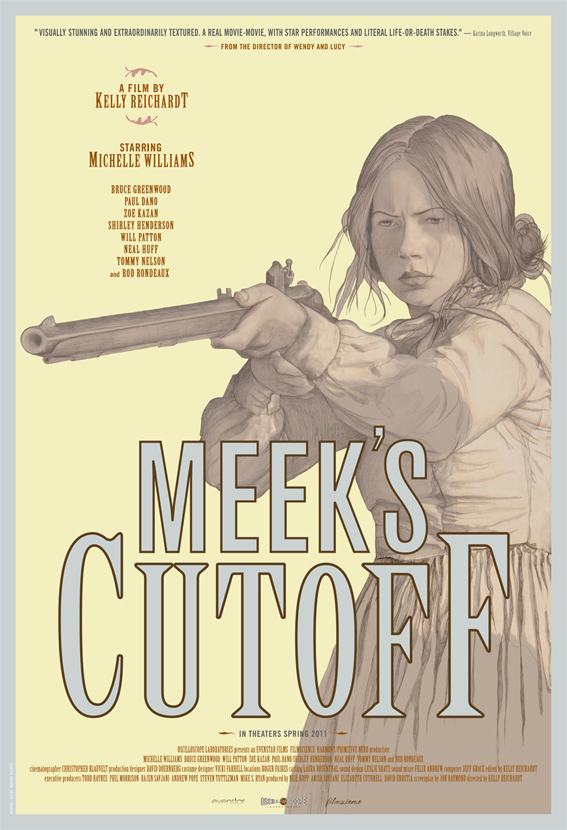 Artsy and aesthetic, “Meek’s Cutoff” aims to please…a select crowd of intellectuals. The tedious, uneventful story centers around three families of Americans (including Paul Dano, Will Patton, and Academy Award-nominee Michelle Williams) traveling across the Oregon trail under the direction of an unhelpful and desperately lost guide, Stephen Meek (Bruce Greenwood). “Is he ignorant, or is he just plain evil? That’s my quandary,” asks Emily Tetherow, played by Williams. When the group encounters a Native American man (Rod Rondeaux) who seems to know where he’s going (but without the benefit of speaking the language; they didn’t have subtitles so neither do we), the group is at odds on whether or not to keep them in their desperate party. Tetherow is an empathetic ear, likening him even to the whites (how dare she, Meek asks). Will he take them into traps of heathens, as Meek suggests, or will he lead them to water and wellbeing? Will they even last long enough to find out?

Performances were pleasing, but an unwarranted amount of routine 19th-century industry stole from the script its promising premise. What could have been a biting family drama was reduced to a documentary, starring Michelle Williams, which would have been better suited in an Oregon Trail museum. It’s the popular children’s computer game without life-threatening diarrhea. The women wash dishes, the men read the Bible, and the children sing songs…about the Bible. Their seemingly mundane lives (with their seemingly mundane problems) are put on display. If these trailblazers had digital camcorders, this would likely have been the outcome. The background noises serve as the soundtrack, though occasionally there is a soft, period-appropriate tune. It’s entirely too realistic for most mainstream movie-goers—but kudos to director Kelly Reichardt for keeping every second of filming within the borders of Oregon.

60-second mises-en-scene show small Conestoga wagons slowly tumbling across the bare wilderness, the rickety wheels of the wagons serving as the metronome to this symphony. It truly belongs in a historic art gallery; it’s an educational and interesting look into the lives of these travelers packaged as dramatic cinema. It gives the wrong impression, attracting an audience expecting an action-packed western or a dramatic family portrait and turning away those fans interested in the history behind it all. “Meek’s Cutoff” is not a bad movie…it’s just an acquired taste. It was interesting, artful, and expertly edited. But it could have been so much more for the majority of film buffs. I saw an edgy family drama—fights, arguments and the like—with a suspense-driven, climactic ending. I saw a great story, a decision to be made, possibly a new classic. What I got was a day-in-the-life-of story veiled in earth-tone bonnets.

For those of you interested in the history and truth behind the Oregon Trail and the travelers thereon, “Meek’s Cutoff” will make your day. But for those like me that hope for a dramatic tale of cowboys and Indians, you’re out of luck. For years critics have called the traditional western dead. By now, it’s been scalped and buried in the sand. R.I.P.

5 thoughts on “‘Meek’s Cutoff’: Is the traditional western dead?”