Take Ryan Reynolds’ “Buried” and put it on four wheels. Keep the inefficient communication to the wife and the government worker. Take away the big star and replace him with a rising one. Bring it back to America. Mix it up a little bit…and you get “Brake,” the latest from little-known director Gabe Torres. “Brake” is a fast-paced thrill ride that hits you whenever you least expect it. Jeremy Reins, played by Stephen Dorff (“Immortals”), wakes up to find himself locked in the trunk of a car after being taken hostage by terrorists. As a Secret Service agent, he knows the whereabouts of the President of the United States, and only his information can help his captors carry on with their assassination plot. They use every mean of mental and physical torture to break the uncooperative agent as they stretch his loyalty to its breaking point. Only cell phone calls to his wife (Chyler Leigh) and a coworker (Tom Berenger) can help him, but can they get to him in time?

IFC, the maker of “The Human Centipede” and its sequel, backs off from the filth and vile that they are notorious for–you won’t see any nudity, vulgarity, or gore. “Brake” won’t nauseate you, but it does have an air of intensity that surrounds many of IFC’s other releases.

After being released on just two screens, “Brake” has split critics. The New York Times’ Stephen Holden says the movie has only one message: “gotcha.” But like so many others, he also compares the movie to 2010’s “Buried.” It’s difficult not to. Variety’s Robert Koehler also compared the two, saying “Like ‘Buried,’ ‘Brake’ may become a technical object lesson in how to film in extremely tight spaces.”

The striking resemblances to “Buried” may have let “Brake” serve as a formidable sequel. But there are differences, and they both have their positives and negatives. “Buried” is a bit more claustrophobic, but “Brake” is faster-paced. “Buried” has a real sociopolitical commentary, it’s a message picture. But “Brake” relies on politics only as plot, and uses it well. “Buried” has a big name star, but “Brake” doesn’t seem to need that. 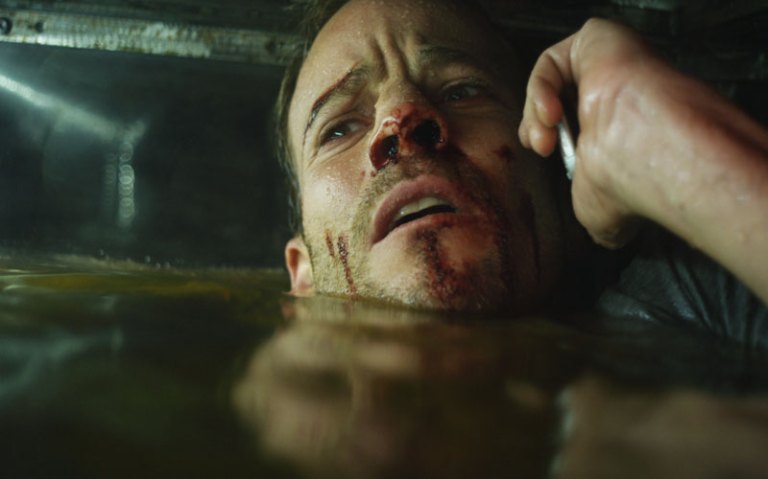 Could there be, under all the similarities, a Hitchcock-worthy mystery to share here? If I’ve ever seen a climax so…well, climactic, it’s been a while. The—as Holden calls it—“double-whammy” trick ending will give you whiplash faster than you can say “Holy sh–” and the pulse-pounding original music from Brian Taylor (“Paparazzi”) makes it even more suspenseful. Dorff is a stellar Keifer Sutherland lookalike, and possesses the same knack for action. And the script, written by first-timer Timothy Mannion and consisting mostly of over-the-phone conversational dialogue, is entirely realistic. “Mind-bending” isn’t an adjective I’ve used since “Inception,” and—while it’s not near that level of quality—“Brake” manages to throw you off its trail once or twice.

Here was where I was going to tell you to “take a brake” to see this film, but I decided it was too predictable.