William Hurt must have been surprised when he received his Oscar nomination for A History of Violence. After one ten-minute scene and no Golden Globe nod, Hurt had to be a long shot. Nominated for the film’s other Oscar, the story (adapted from the graphic novel by John Wagner) revolves around the ideal nuclear family, Tom (a relatable Viggo Mortenson), Edie (Maria Bello, the other half of cinema’s most famous staircase sex scene) and their two children, Jack (Ashton Holmes) and Sarah (Heidi Hayes), who live in the quaintest of Indiana towns. When Tom spoils an attempted robbery and becomes his small town’s local 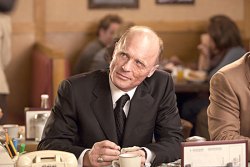 hero, he receives unwanted attention from a group of mobsters that think they know the hero. When Tom insists that they have his identity mistaken, the group, led by the eerily entertaining Ed Harris, begins stalking his family until Tom must face their claims. Mortenson and Bello seem the perfect couple, from the small acts of romance to the tag-team parenting style, and their acting reflects their characters’ unique chemistry. The Irish gang of thugs (director David Cronenberg initially wanted an Italian mob, but thought Ed Harris would make a better Irishman) is perfectly creepy, and, while they do seem somewhat cookie-cut, Jack and Sarah play their minor roles well. I could use words like “pulse-pounding,” “unpredictable,” or “thrill ride” to describe the erratic story, but you wouldn’t believe it until you see it. Sometimes the snaky story thrills at the expense of plot, and the ending might leave you needing closure—but when you try to leave your seat, you won’t get past the edge.

You may think this connection is a bit left field. A quick round of “Find the Bacon” shows me that Win Win’s Paul Giamatti starred with Maria Bello in Duets,

and Amy Ryan, who plays the wife of Giamatti’s character, starred in Gone Baby Gone with Ed Harris. Connections made, and it didn’t even take six degrees. Okay, so it’s a stretch, but when you watch movies daily you try not to rush things. So you forget logic—which is exactly what small-town lawyer Mike Flaherty (the infallible Paul Giamatti) does when he becomes the legal guardian of Leo (Burt Young), an aged client at the onset of dementia. Fearing the extra stress, Mike places Leo in a nursing home, despite Leo’s pleas, and continues to collect the monthly $1,500 checks for taking care of the man. A battle of conscience ensues when Leo’s 17-year-old grandson Kyle (Alex Shaffer) comes to visit unexpectedly and must reside with Mike, his wife (Amy Ryan), and his young daughter Abby (Clare Foley). Mike milks the situation for all its worth, but eventually he’ll have to face his ethics and decide what’s best for Leo, Kyle, and his own family. Giamatti normally plays relatable guys, but in Win Win we see an ultra-familiar everyday American. Mike is struggling to make ends meet, he’s out of shape, and he apologetically curses in front of his young children. He’s the 99%. His friends, played by Jeffrey Tambor and Bobby Cannavale, 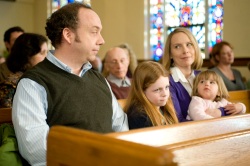 act like normal guys too. Believable acting at its best. Kyle, the newest addition to the household, acts robotic in his role. Something about it just seems fake. The unusual tale threads the line between documentary-style realism and what I’ll call “movie fiction.” Most lines of dialogue seem reasonable for a small New Jersey family, but not at the expense of profundity. Unlike Chronicle, the script sounds somehow distinctly Hollywood, in the best ways. Win Win is special, unlike most movies you’ll see this year. It’s one from the heart…and you may even learn something about yourself.