Winner of “Best Documentary Feature” at the 2009 Academy Awards, Man on Wire recounts one of the most intrepid misdemeanors ever imagined, what some have called “the artistic crime of the century.” In 1974, Frenchman Philippe Petit tight-roped the 200-foot span between the World Trade Center towers in New York City, walking, kneeling, and laying on his back for approximately 45 minutes without any connecting cables or netting below. It began as a dream, an intangible promise in the form of an advertisement in a French magazine that the towers would be built. Philippe ripped out the ad, hailing the buildings the tallest the world has ever seen, thus beginning the vicious practice routine that would lead to the dangerous, breathtaking feat.

Man on Wire presents a sort of noir look and feel and triumphs in cinematic achievement. Its dark, dramatic recreations blend masterfully with pictures, archived videos, and present-day interviews with Petit and his accomplices. At times, I do wish they would have been able to retrieve more actual footage and cut out some of the representations, but in the early 1970s I can imagine not everyone had the ability to document everything. That’s coupled with the fact that Man on Wire was only the supplement to a book penned by Petit, so at the time no intentions of a future Oscar-winning documentary were yet conceived. 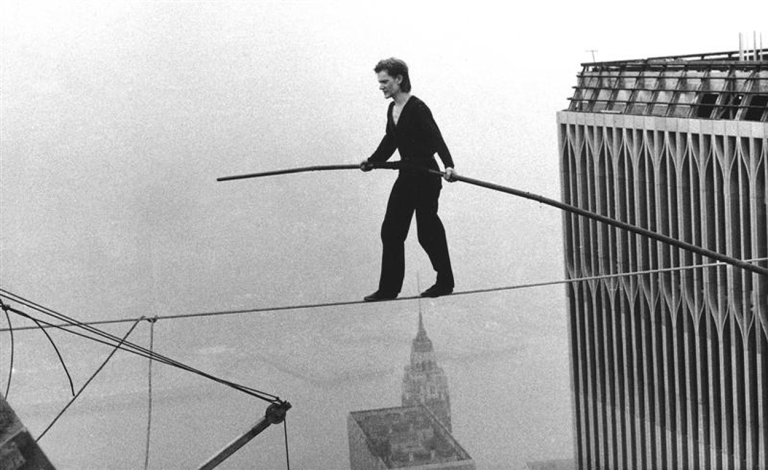 While the set-up for the climax is slow and calculating, the wonderful interviews with Petit help the story along. He is comical, emotional, and his French accent is music to my ears. Speaking of music, “A Fifth of Beethoven” adds a bit of clever fun to the aforementioned noir feel and amusingly compliments Petit’s wit.

An incredible true story about chasing your dreams leads to a heartbreaking truth, as Petit’s feat leads to losing some of his closest friends for a new life of stardom—and the film documents every detail. Man on Wire is tense, clever, and emotionally driven, as it chronicles one of the most thrilling stories imaginable. It just makes you want to say “Bravo!”