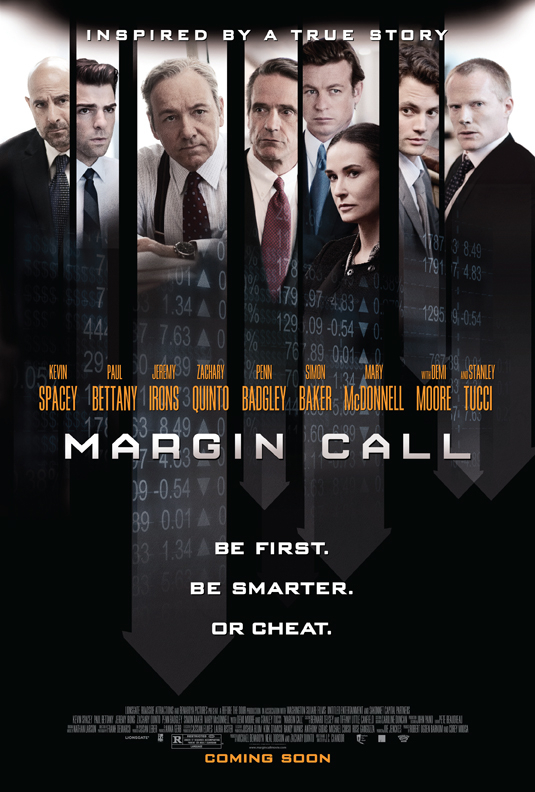 An extremely humanized, slightly fictionalized story of the recent Wall Street collapse, Margin Call is the first from writer/director J.C. Chandor (whose father, it may be worth noting, worked for years with Merrill Lynch. J.C. often accompanied him to the office in his formative years). After a heed of caution from the recently fired Eric Dale (a brilliantly utilized Stanley Tucci), a risk analyst, employees Peter Sullivan (Zachary Quinto, in a solid performance) and Seth Bergman (Penn Badgley, who is great despite his “Gossip Girl” past) discover the beginning of the end of their financial firm. In the next 24 hours, the two report up, to Sam Rogers (a deeply emotional and splendid Kevin Spacey), Jared Cohen (a businesslike, suave Simon Baker), and eventually, up to John Tuld (a perfectly refined Jeremy Irons). Watching Spacey duel with Baker and Irons is entertaining and amusing.

Intense drama is heightened greatly by the midnight setting (the height of the action occurs between roughly 8 p.m. and 4 a.m.), the dim lighting throughout the office, the pervading, intense arguments, and the incredibly secretive and discreet nature of the process.

While most movies that deal with financial situations (Wall Street and Pi, though still a fantastic film) are filled with fancy money jargon, Margin Call delivers its story in layman’s terms and remains a captivating drama. While Quinto and Badgley’s characters know their stuff, the higher-ups plead with them to simplify the situation. “Speak as you might to a young child…or a golden retriever. It wasn’t brains that got me here, I assure you that,” Irons explains to Quinto, acting as the uninformed audience. I didn’t once feel lost, and that definitely helps.

In doing so, financial films often dehumanize the situations. Margin Call personifies and humanizes the machine of Wall Street, and even sympathizes with many of those “1%.” Young Peter and Seth curse, drink, and discuss salary like most guys their age. Sam loses his best friend, his brown lab, to liver problems, and talks to his ex-wife, with whom he has a friendly relationship.

Margin Call ends rather unusually, as the financial crisis is obviously ongoing and no closure is truly possible.