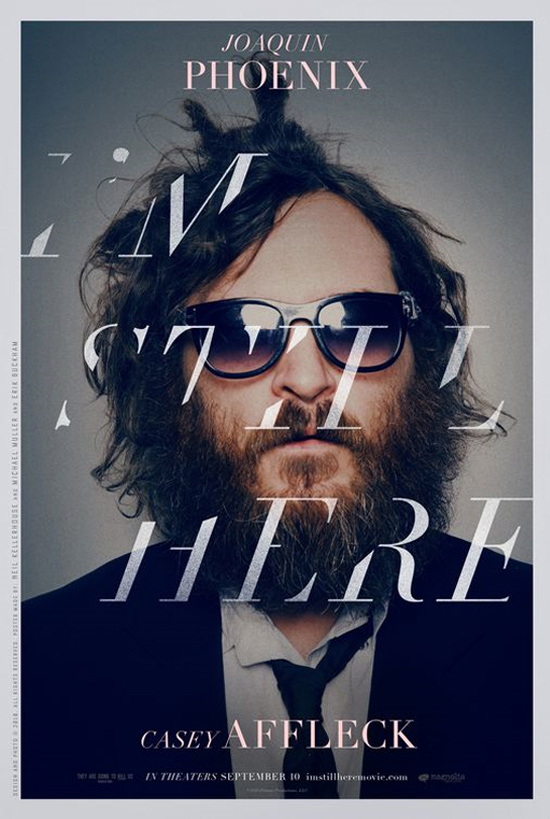 “I don’t wanna play the character of Joaquin anymore.” It’s Joaquin Phoenix’s latest movie. I’m Still Here? Well, he was. But not since mid-2010 have we heard much from Joaquin Phoenix. He’s working on two movies, putting to rest those phony retirement rumors, and he still doesn’t have a legitimate rap album out.

Playing “JP,” Phoenix and his buddies Antony Langdon and Casey Affleck shoot this mocumentary-style movie about Phoenix’s transition from acting to “a hip-hop/’Bohemian Rhapsody’ kind of thing.” The media stunt that went on for months was all an elaborate scheme put on by the crew in order to get the best out of this film. And for a second, it worked.

Bits from the Oscars, David Letterman’s late-night show, and a collage of independent online Youtube hater videos are shown throughout, making the context of the movie all the more important. Remembering the Letterman interview (“Joaquin, I’m sorry you couldn’t be here tonight”) or Ben Stiller’s Oscars impression makes the film more comical. Forgetting or simply not knowing such media frenzy actually occured would take much of the quality of the film away. The final product of this circus gave closure to many, and to look at it as one huge practical joke makes it a lot more fun to watch. If only the crew wouldn’t have taken it so seriously.

If this was all just a hoax–if he really wasn’t high on coke or buying hookers–Joaquin Phoenix is a bit of a genius. I mean, when you act like he acts in this movie, you assume something is mentally unwell within him. And that may certainly be the case still, don’t get me wrong. But if that was acting, it hits a new high for the two-time Oscar-nominated actor. It was truly an inspired performance. I’m not sure what he was inspired to do exactly, but he definitely gets into the role.

At 108 minutes, this is an average length for a movie. But with bland dialogue and forced drama, this hour and a half was the longest in my life. A fan of full-circle endings, however, I did like where it stopped. But let’s face it, I would have been happy with any ending, as long as I didn’t have to watch anymore. Context really is the key to enjoying this piece of media history, because the media circus that ensued prior to the movie’s release really sets it up. Now, no one remembers much of that. Joaquin Phoenix doesn’t remember much of that. Time flies in this world of media and 24-hour news cycles.

He seems to enjoy exposing his bare belly and hairy chest, as he does multiple times throughout the film. He looks like Zack Galifianakis a bit, but he’s not near as funny. Also, any drama in the film seems phony, as he argues with his friend Antony for what seems like hours. Not funny, not serious…you really have to see the movie to appreciate who Joaquin Phoenix became for a while.

I’m Still Here relies heavily on its context, and it doesn’t supply enough of it to make this movie relevent today. When it released, I assume it was great, but now it’s lost its luster.