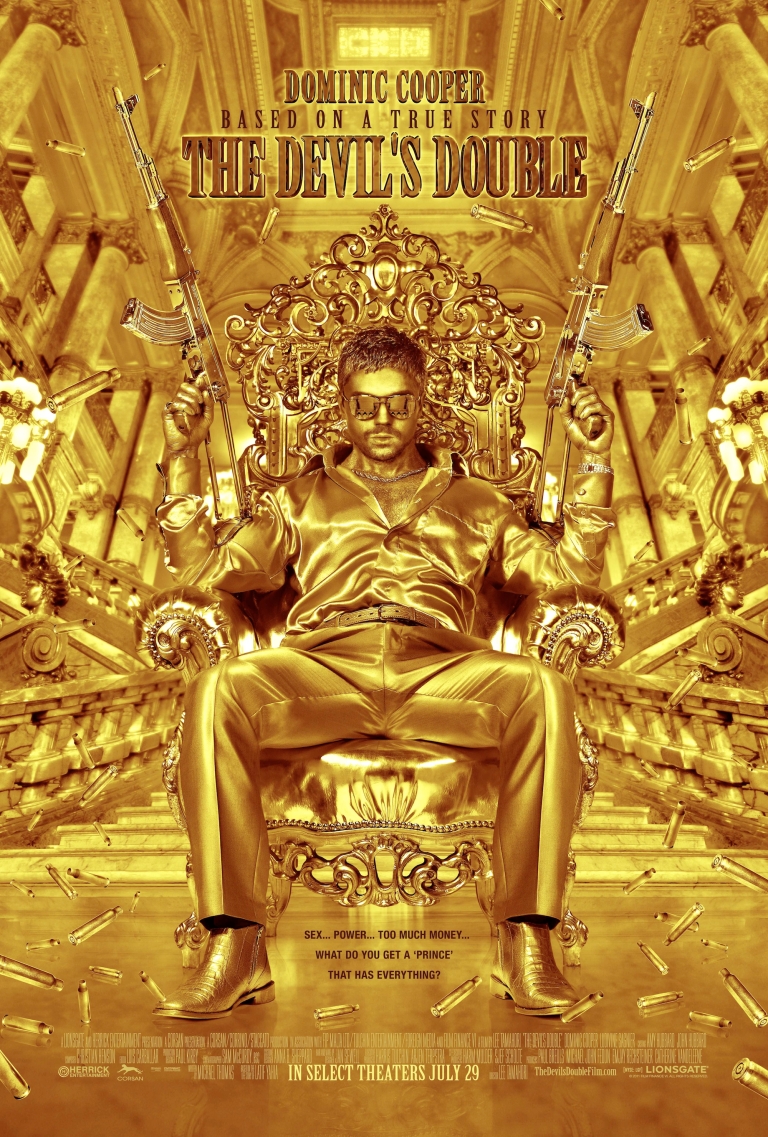 This is not your sister’s Dominic Cooper. The Mamma Mia! star has moved on in his career, joining the likes of Lindsay Lohan and Armie Hammer by playing multiple roles within the same film as The Devil’s Double.

Before dying at the hands of American forces in 2003, Saddam Hussein (Philip Quast) and his son Uday (Dominic Cooper) each hired body doubles to help with their busy schedules and protect them from especially aggressive crowds. As Uday Hussein’s double, Latif Yahia (also played by Cooper) lived a luxurious, stylish life full of money, drugs, and sex. Uday allowed his “brother” to make use of any and all of his possessions, but soon, Latif began to realize that neither Uday nor his life were all that it was cracked up to be, as he faced gunfire, beatings, and disconnect from his former life. So he tries to get out.

Based—loosely, I can imagine—on the life of Yahia, The Devil’s Double expertly mingles a fascinating story with powerful action sequences and graphic imagery. On set, Yahia offered himself to help filmmakers capture each scene as he saw it. Calling it simply an “action flick” would diminish the film’s quality, as it blends family drama with a blossoming romance to create a movie that demands to be recognized. At times, turning your head is necessary, as guts are spilled and heads are shot in dramatic fashion. During the naked birthday scene, at least a dozen women and a couple of men get completely naked–probably five or six being shown full-frontal for a noticeable amount of time–and dance on the dance floor, upon Uday’s  demand. Chalk it up to the cocaine or the power-high, but Uday gets what he wants. It’s shocking, to say the least, but it’s how the sadistic man lived.

In a refined performance, Dominic Cooper leads a cast of look-alikes especially well. While Cooper’s Iraqi accent is more reminiscent of Borat than a Hussein, his emotional command is impressive. Even more remarkable, Cooper went from one character to the next in an instant as the movie only took 54 days to shoot, with virtually no breaks. He might overact a bit, and at times it seems like his make-up artist tried too hard to get his look spot-on (overall, however, a solid B for costume/make-up). His supporting cast is good, but he steals the spotlight most of the time. He gets the screen time, and he doesn’t disappoint.

Director Lee Tamahori (Along Came a Spider) and cinematographer Sam McCurdy (The Descent) use ingenious techniques to either heighten the action or sympathize with characters (Uday left many victims) at the appropriate times. Technical specs aren’t vital when you have a story like this, and they seamlessly tell you the story. The best cinematography is that which you don’t notice.

The Devil’s Double is a fascinating true story, as educative as it is dramatic. The special features show Cooper’s character transformations, an interview with “the real devil’s double,” and a peek into the life of Uday Hussein.

4 thoughts on “This deserves a ‘Devil’s Double’-take”